In 1998, Maxine Waters Sung a Very Different Tune on Impeachment

Rep. Maxine Waters describes herself as being on the “front line” in the desire of many Democrats to forcibly reverse the results of a presidential election and impeach the President of the United States; for yet-to-be-determined “high crimes and misdemeanors” and her personally-defined threshold of Donald Trump’s not being fit to lead.

Listen to the words of Congresswoman Waters in 1998 during the Bill Clinton impeachment hearings where she was quite worried about the collateral damage done to others swept into the progress, the fact the charges were relatively vague and not what could be officially determined to be “high crimes”.

If one were to substitute her references to “Clinton” with “Trump”, her arguments against impeachment dance in the realm of hypocrisy.

Listen to all of the things Rep. Waters cared about in 1998: the “hatred”, the “American soldiers”, “partisan impeachment”, the “American public”, “private lives opened up” and “destroyed”, “the people’s House”, a “coup d’etat”, “extremists”, “rule of law”, “trumped-up charges”….

However, today Waters apparently cares little about the financial ruin of General Michael Flynn and others at the hands of Special Counsel Robert Mueller. Waters apparently cares little about the possible removal of a “populist president” who has managed to produce bonafide results for the American people despite the resistance of the normal slow-motion process of fat-and-happy federal politicians and employees who’ve produced nothing but a lethargic mechanism that taxpayers are forced to support.

Waters apparently cares little about the American people who voted for Donald Trump and believes she can overturn the results of an election just because she doesn’t like his personality and methods. 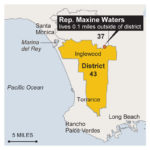 This is (again) about Democrat power and Auntie Maxine’s quest for popularity and relevance. Just take a look at the stock market since the Democrats retook the House. It’s not pretty, but the welfare of the American people has always been a low priority when it comes to people like Rep. Waters. It’s always been about Maxine first.

Just look at the ongoing state of decline of Waters’ districts since she was first elected in 1990; a district today she’s had no desire to live in for many years.