The ‘Baby, It’s Cold Outside’ Offended Are Banning the Wrong ‘Music’

You can lay this right at the feet of the exploitive leftists in what was once called the “music industry”. It took talent and skill to compose and perform music. You actually had to be able to sing to be in what was called the music industry. You also had to know your potential audience and create music that would hopefully be universally appreciated.

Today, too many are looking for reasons to be offended about anything; almost to the point of the absurd.

Star 102, WDOK-FM, calls itself “Cleveland’s Christmas station.” But its listeners are discovering that one holiday chestnut has been kicked to the curb. “Baby, It’s Cold Outside,” the duet in which a man tries to dissuade a woman from leaving a party despite her repeated protestations, has been pulled from the station’s Christmas playlist amid concerns about its predatory nature.

Penned by “Guys and Dolls” writer Frank Loesser in 1944, the Christmas song is perceived by some as unworthy for the most wonderful time of the year — particularly in the age of #MeToo.

“The character in the song is saying, ‘No,’ and they’re saying well, ‘Does no really mean yes?’ and I think in 2018, what we know is consent is ‘Yes’ and if you get a ‘No’ it means ‘No’ and you should stop right there,” Sondra Miller, president of the Cleveland Rape Crisis Center, told WJW-TV. “I’ve asked them to stop and think about the perspective of a survivor who was raped in that type of circumstance.”
— CNN, 12/1/18

Of course, it had to become monkey-see, monkey #MeToo.

Now how many #MeToo activists have publicly objected to the fact that 465.3 million have viewed the following video on the socially-sensitive YouTube platform; a “song” that would clearly be offensive to today’s “survivor” demographic save for the fact it’s probably on many of their Spotify playlists.

Those who look down on and tell us all how we’re supposed to think are also guilty of not seeking out the best while distributing filth because they think so little of the ability of those they employ and the dignity of their consumers. 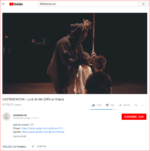 Earlier this month, Spotify introduced its new Hate Content and Hateful Conduct Policy. Its aim was to minimize their promotion of problematic artists, and led to R. Kelly and XXXTentacion’s music being removed from their curated playlists. Many, including followers of the #MuteRKelly movement, praised Spotify’s new ruling, but plenty others — including Kendrick Lamar — have expressed concern and disapproval over what they believed to be a form of targeted censorship against artists of color.
— Consequence of Sound, 6/1/18

Some of these so-called “artists of color” are downright embarrassing examples of limited talent who squander golden opportunities with creations of questionable aesthetic value. Maybe it’s a generational thing but I’m failing to see the “art”.

With all of the talented musicians and composers in the United States alone who are languishing without any opportunity to produce real music, record companies are more interested in distributing shit like this….

BTW — The previous examples were quickly and randomly found.

I know how hard it is to get any of the so-called artists, record and publishing companies to take a listen to original music; music it took months to compose, produce, perform, and mix to a competitive level. It’s sad watching today’s accepted acts whose music is subdued and lyrics that are narcissistic and depressing.

Contrast that with songs created that were justifiably overplayed on the radio back in the day but when performed with the appropriate professionalism, blows away anything created by shit talkers or the coffee shop snoozers.

When the looking-to-be-offended socially depressed decide to get the courage to take on the clearly sexist, racist, violence-embracing so called “music” assaulting the soundwaves of the general public, we have no time for their finding (what THEY consider) warped messages in songs written a generation-plus earlier hashtags were even contemplated as a vehicle for social awareness.

Until music company executives show any modicum of respect for the craft and continue to elevate the talentless who produce “songs” that aren’t allowed to be played in their own children’s rooms, we’ll have yet another double standard where real music is censored and shit is justified and mainstreamed.

And unappreciated classics will be left out in the cold.