#ShutdownHypocrisy: NO Freebies for Americans After Obamacare Killed Jobs

Thanks to the government shutdown, we’re seeing story after #ShutdownStories about poor federal government employees who are going to have trouble paying their mortgages, put food on their tables, meet their car payments, etc. The sympathy has extended to businesses offering free goods and services to ease the pain these public servants are now enduring because President Trump wants a wall to protect Americans from illegal aliens and Democrats do not.

With the laudable, altruistic rush to help a fellow American in need, one can only ask why now and what makes these people so damn special?

Sorry, but it takes more than ONE delinquent payment to be foreclosed-on or evicted, so either this is an overly sensational #ShutdownStories headline or those government workers have issues.

Many Americans are still reeling from the after effects of the many Obamacare falsehoods delivered.

For “people who already have insurance, and the employers who are providing it,” Obama said at one campaign event, “we will work to lower your premiums by up to $2,500 per family.” So was he talking about lowering the rate of increase? It sure didn’t seem that way. On CNN he said, “We’re going to reduce costs an average of $2,500.“
— Investors Business Daily, 9/23/15

As was predicted and as we all now know, the results of the politics was devastating to the lives of millions of Americans.

We found that since the ACA became law, among small businesses, the rise in premiums has been associated with $19 billion in lost wages, small businesses (20-99 workers) lost 295,030 jobs, 10,130 business establishments, and $4.7 billion in total wage earnings. Florida lost 17,950 jobs; Ohio lost 19,000; Pennsylvania lost 15,680; and Texas lost 28,010 jobs due to higher sensitivity to rising health care premiums and the ACA.
— American Action Forum analysis

Let’s look at some simple numbers: around 800,000 federal workers who are furloughed versus almost 300,000 Americans who actually lost their jobs. One would think those who didn’t have the luxury of knowing they would eventually receive back pay would’ve loved a public outpouring of freebies to help them get by.

“I feel so alone”: How federal workers are suffering after 3 weeks without pay

However, Americans received nothing. No sympathy from the media who are actively looking for personal stories of angst and misery today. No slack from banks. Certainly no free (promotional) meals in pricey downtown D.C. restaurants or from supermarket chains. No free movies or museum passes; zip, zero, nada.

No one gave a damn about the careers of Americans destroyed, homes and cars lost, marriages disrupted if not destroyed, and all of the other collateral damage done when you lose hours or your job altogether during a lousy economy. 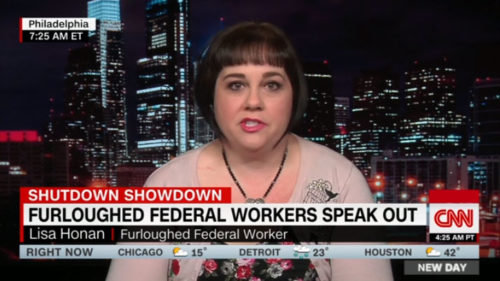 So, yes, while many of us understand the hardships many of these federal workers are going through, we’re also rather disgusted by the media overreach to make us all feel their pain today while they could care less about the pain of millions of Americans a few short years ago.