Gentrification: The Tyranny of an Entitled, White Manhattan Female

I grew up in the section of Boston called The South End which was sandwiched between the more affluent Back Bay and the impoverished neighborhood of Roxbury, considered “the heart of Black culture in Boston“. When I later got my own apartment on Tremont Street, I (as a courtesy) escorted all of my white friends in; not because they’d really be all that endangered but to make them feel comfortable.

Now, when we go visit that same area, I am met with glares of suspicion from tolerant, inclusive white liberals of all ages. It’s like they want to know if I have a reason to be in this area that was technically the Hood and now a very expensive enclave of condos and high-priced luxury apartments?

So when I see what recently happened in a gentrified section of New York City, I understand….

She pays no excise taxes, regularly-scheduled inspection fees, insurance, fuel, routine maintenance or any other massive expense those who drive automobiles do, yet she believes she can stop traffic and talk down to those who may have previously lived there and no longer can afford to.

In 2014, Spike Lee relayed the sentiment by gentrification-affected blacks pushed out by the yuppie class. 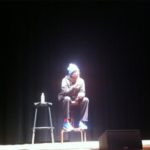 Here’s the thing: I grew up here in Fort Greene. I grew up here in New York. It’s changed. And why does it take an influx of white New Yorkers in the south Bronx, in Harlem, in Bed Stuy, in Crown Heights for the facilities to get better? The garbage wasn’t picked up every motherfuckin’ day when I was living in 165 Washington Park. P.S. 20 was not good. P.S. 11. Rothschild 294. The police weren’t around. When you see white mothers pushing their babies in strollers, three o’clock in the morning on 125th Street, that must tell you something.

[Audience member: And I don’t dispute that … ]

[Audience member: Can I talk about something?]

Nah. You can’t do that. You can’t just come in the neighborhood and start bogarting and say, like you’re motherfuckin’ Columbus and kill off the Native Americans. Or what they do in Brazil, what they did to the indigenous people. You have to come with respect. There’s a code. There’s people.

You can’t just — here’s another thing: When Michael Jackson died they wanted to have a party for him in motherfuckin’ Fort Greene Park and all of a sudden the white people in Fort Greene said, “Wait a minute! We can’t have black people having a party for Michael Jackson to celebrate his life. Who’s coming to the neighborhood? They’re gonna leave lots of garbage.” Garbage? Have you seen Fort Greene Park in the morning? It’s like the motherfuckin’ Westminster Dog Show. There’s 20,000 dogs running around. Whoa. So we had to move it to Prospect Park!

I mean, they just move in the neighborhood. You just can’t come in the neighborhood. I’m for democracy and letting everybody live but you gotta have some respect. You can’t just come in when people have a culture that’s been laid down for generations and you come in and now shit gotta change because you’re here? Get the fuck outta here. Can’t do that!

And then! [to audience member] Whoa whoa whoa. And then! So you’re talking about the people’s property change? But what about the people who are renting? They can’t afford it anymore! You can’t afford it. People want live in Fort Greene. People wanna live in Clinton Hill. The Lower East Side, they move to Williamsburg, they can’t even afford fuckin’, motherfuckin’ Williamsburg now because of motherfuckin’ hipsters. What do they call Bushwick now? What’s the word? [Audience: East Williamsburg]

That’s another thing: Motherfuckin’… These real estate motherfuckers are changing names! Stuyvesant Heights? 110th to 125th, there’s another name for Harlem. What is it? What? What is it? No, no, not Morningside Heights. There’s a new one. [Audience: SpaHa] What the fuck is that? How you changin’ names?

And we had the crystal ball, motherfuckin’ Do the Right Thing with John Savage’s character, when he rolled his bike over Buggin’ Out’s sneaker. I wrote that script in 1988. He was the first one. How you walking around Brooklyn with a Larry Bird jersey on? You can’t do that. Not in Bed Stuy.

So, why did it take this great influx of white people to get the schools better? Why’s there more police protection in Bed Stuy and Harlem now? Why’s the garbage getting picked up more regularly? We been here!

All right, go ahead. Let’s see you come back to that.