As far as patterns go, liberals believe they can say anything they want about anyone who disagrees with them but when a face-to-face discussion is on the table, only then do they seek civility, unity and a respectful dialogue… sort of.

Actor and activist Alyssa Milano will meet with Texas GOP Sen. Ted Cruz on Tuesday to talk about gun reform, after they had a set of exchanges on Twitter over what is needed to be done in the aftermath of mass shootings in Odessa and El Paso. “We don’t agree on this issue. But if we can talk with mutual respect & humility, maybe all of is come together to effect positive change,” she wrote on Twitter on Wednesday evening.

Milano had originally proposed the meeting be live streamed “so the American people can hear your bullshit 1st hand.”
— Deadline, 9/5/19

We’ll see how eager she is to allow the nation to see just how clueless she is, but when it comes to “come together”, Alyssa Milano was never quite there.

Alyssa Milano On Parenting: ‘You Don’t Know What You’re Doing!’
Refers To Herself As A ‘Person Of Color’ And ‘A Gay Man’ In Tweet
Milano: Red MAGA Hats Are the New White Hoods – Let’s Take a Stand
Went To Border Detention Center In a Chauffeured Mercedes, Demanded Entry
Calls for tweets insulting Alabama lawmakers over recently passed abortion bill
Blasts Republicans and Democrats Following Mass Shootings: ‘They All Suck’
Tweets images comparing Mike Pence to Holocaust architect Heinrich Himmler
Opens up about her friendship with Biden amid backlash for defending misconduct allegations
Sounds off on ‘absurd’ anti-abortion laws

Slams ‘has been’ Jon Voight over support of Trump: ‘Stay in your lane’
Milano Is Fighting to Hold Trump Accountable for Russia ‘Collusion’
Says ‘we can’t survive’ another 4 years of Trump, focuses on grassroots activism to get him out
Traumatized by elves all doing Nazi salute in Christmas store
JOIN ME by not having sex until we get bodily autonomy back
Anti-Trumper Alyssa Milano is broke as a joke, didn’t pay taxes, stiffed her employees
Spreads Fake News About Trump Deporting Kids with Cancer: ‘Impeach This A**hole Now’
Said Her Life Would Lack ‘Great Joys’ If She Hadn’t Aborted 2 Children
Milano: Dems should elect entire 2020 field, make Michelle Obama secretary of state
Slams critics after tweeting about her kids’ toys: ‘Great job showing your hatefulness, Trump trolls’ 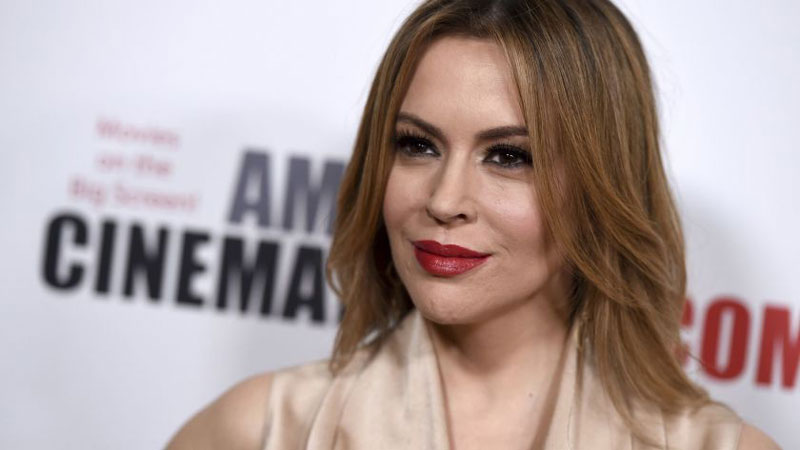 Unlike the real world where you have to prove your value and then get paid, Hollywood “actors” negotiate their compensation upfront before they utter one line so even if the production bombs, it’s no big deal.

Alyssa Milano is at that point in her “career” where any attention is a good thing. Insulting half the country who didn’t vote the way she wanted in 2016 is okay with her, and no amount of cosmetics will hide that demand for relevance so she can keep those TV, B-movie and cable series paychecks coming in.

It remains to be seen if she thinks she can hold her own against the likes of Senator Ted Cruz, and a thumbs up or down on making this upcoming discussion public will speak volumes. The ability to think on her feet against someone who’s forgotten more about policy than Milano’s ever Googled should be quite entertaining.