Valerie Plame: How NOT to Launch a Congressional Campaign Video

Most people who attempt to run for a political office, try to launch a campaign video with as much forward momentum as possible. Former CIA employee Valerie Plame didn’t read that book.

…
Plame is running for the seat currently held by New Mexico’s Third Congressional Democrat Ben Ray Lujan who is seeking a promotion.

The first question that may be asked is why she’s shown driving her Camaro in reverse for most of the video.

I’m running for Congress because we’re going backwards on national security, health care, and women’s rights. We need to turn our country around.
— “Undercover” — Valerie Plame for Congress, YouTube

By the end, she wants the viewer to see her as some badass chick.

“Yes, the CIA really does teach us how to drive like this.”

Fair enough. That could come in handy should she be late for a vote on Capitol Hill.

While some will conveniently call these “rookie mistakes”, there are a few things wrong with this video.

Unless her campaign received expressed permission, they may have broken the rules within the first ten seconds.

Most U.S. government creative works such as writing or images are copyright-free. But not everything is. So before you use a U.S. government work, check to make sure it does not fall under one of these exceptions:

You cannot use government trademarks or government agencies’ logos without permission.

You cannot use a government work in a way that implies endorsement by a government agency, official, or employee. For example, you can’t use a photo of a government official wearing your product in an ad.
— USA.Gov

You never know. The Plame for Congress campaign may have received permission from the CIA to use their logo, but if so the agency may have also required the Plame campaign to add a disclaimer stating use of the logo didn’t imply an endorsement. No such disclaimer was included.

One of the benefits of time and public consciousness is that you can say something today that too many knew nothing about when it was happening because of either slanted media coverage or some being too young to have been paying attention.

“Dick Cheney’s chief of staff took revenge against my husband and leaked my identity. His name? Scooter Libby. Guess who pardoned him last year?”

Plame continues to state that former adviser to Vice President Dick Cheney Scooter Libby “outed” her as a CIA operative. Libby was fined, even did time and was eventually pardoned by President Trump simply because he had trouble answering specifics during a lengthy FBI perjury trap, complete with grand juries. If you can accurately repeat every bit of minutia within a conversation you had two years ago, more power to you especially if you’re freedom is on the line.

But there’s one small detail Plame still can’t get herself to publicly admit: Scooter didn’t out her.

Former Deputy Secretary of State Richard Armitage acknowledged Thursday that he was the source who first revealed the identity of CIA officer Valerie Plame to syndicated columnist Robert Novak back in 2003, touching off a federal investigation. Armitage told the CBS Evening News that he did so inadvertently.

In a column published on July 14, 2003, Novak, citing two senior administration officials, noted that Plame was a CIA operative. The column was primarily about Plame’s husband, Joe Wilson, a former career diplomat and critic of the intelligence underlying the invasion of Iraq.

Last month, sources told CNN that Armitage had revealed Plame’s role at the CIA in a casual conversation with Novak.
— CNN, 9/8/06

So, more than 13 years after the truth was revealed and an innocent man was fined and imprisoned, Valerie Plame STILL falsely accuses Libby of something it was proven he didn’t do so she can remain the victim. Think Scooter’s hired a lawyer because it’s really bad when a Democrat is called out by the Washington Post, and is determined to be a liar.

“Please recall that Scooter Libby was convicted of obstruction of justice because he attempted to hide information from the prosecutors. He obstructed justice, perjured himself and was held accountable until Donald Trump pardoned him. No one suggested he leaked it,” said Plame spokesman Daniel Garcia.

Did Danny not hear what Valerie said in their own campaign video?

Plame’s name and CIA role was first disclosed in Robert Novak’s column. Novak’s original source was Armitage, and his confirming sources were Rove and a CIA spokesman. Novak’s column led to the firestorm that launched a federal investigation. But no evidence shows that Libby disclosed Plame’s role to Novak.

As far as her ongoing claim she was this “covert” CIA operative, brought in from the cold while her family was imperiled because of the leak, the jury’s still out on this one.

The glamorous Mrs. Wilson was depicted as the victim of White House machinations that aborted her career in secret intelligence.

(Congressman Henry) Waxman and Democratic colleagues did not ask these pertinent questions: Had not Plame been outed years ago by a Soviet agent? Was she not on an administrative, not operational, track at Langley? How could she be covert if, in public view, she drove to work each day at Langley? What about testimony to the FBI that her CIA employment was common knowledge in Washington?
— Robert Novak, 3/22/07

In the ad, Plame appears to need some street cred.

“I come from Ukrainian Jewish immigrants.”

Why was that added? Maybe because some inconvenient social media posts may come up…?

Former CIA operative Valerie Plame Wilson tweeted out an anti-Semitic article that claimed Jews were the cause of America’s wars. 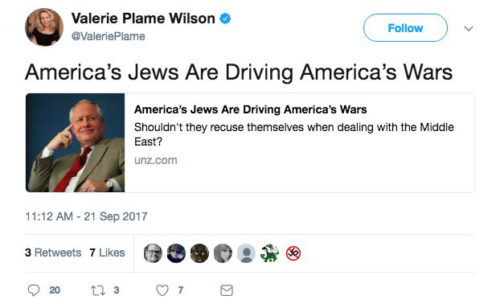 Following backlash, Plame Wilson defended herself in a series of tweets that pointed out she had a Jewish background.
— Washington Free Beacon, 9/21/17

Don’t bother looking for all those Tweets. They’ve been conveniently scrubbed from her personal account.

And tying back into the badass impression she’s trying to give, there’s another problem with implications in the ad. 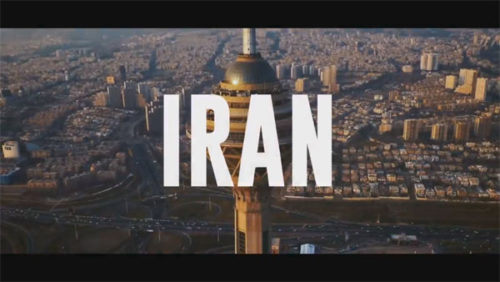 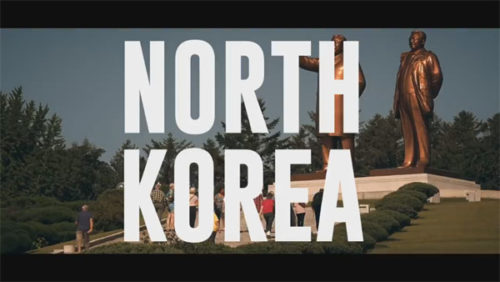 Plame was never stationed in Iran or North Korea but it sure sounds good. For all of the patriotic Americans who were and are on the ground behind enemy lines, this isn’t a “stolen valor” moment, but it’s pretty damn close.

“Mr. President, I have a few scores to settle.”

She’s had it out for President Trump for quite awhile and shown the clear dismissal for the free speech of someone SHE doesn’t like. 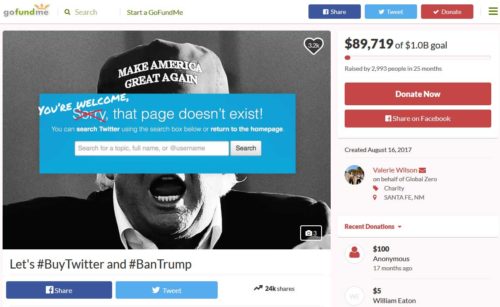 Valerie Plame Wilson is fundraising to buy a controlling share of Twitter so that she can ban President Trump from the social media platform.

Wilson, who was revealed to be a covert CIA operations officer in a 2003 leak, slammed Twitter executives for ignoring calls to enforce the company’s own community standards and delete Trump’s account.
— Washington Examiner, 8/21/17

We’re kinda’ sure President Trump won’t shy away from this implied call-out.

Valerie Plame is off to a rough start, then again Democrats have been lying to potential voters and constituents for decades so if elected, she’ll fit right in.