What a difference an administration makes.

After years of lip service to veterans, a president is finally making good on promises to veterans but you wouldn’t know it after listening to a “nonprofit” advancee within the Department of Veteran Affairs. 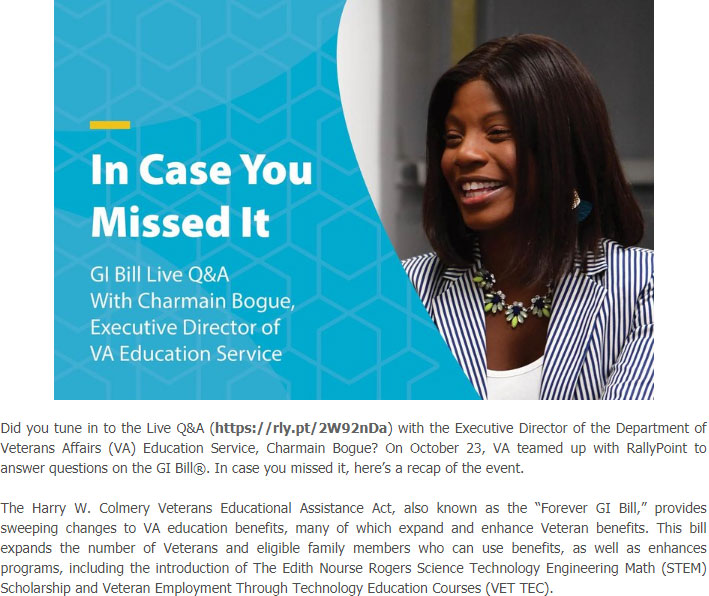 Despite working her way up the ranks during the Obama administration, Executive Director of the Department of Veterans Affairs (VA) Education Service, Charmain Bogue gives no attribution or kudos to President Donald Trump or the then-Republican Congress in their attempt to rectify the wrongs of the past and make education opportunities open to all veterans.

Served as the Senior Project Management Officer for VA’s implementation of the Harry W. Colmery Veterans Educational Assistance Act (commonly referred to as the Forever GI Bill), which contains the most comprehensive changes to the GI Bill program since the creation of the Post-9/11 GI Bill program.
— Charmain Bogue, LinkedIn

A Forever GI Bill NOT introduced or passed by a Democrat Congress and signed by President Obama….

President Donald Trump signed an expansion of veterans education benefits Wednesday, boosting aid by $3 billion over the next 10 years and extending assistance to some veterans and dependents who didn’t qualify.

Trump signed the bill – dubbed the “Forever GI Bill” by its supporters – at his golf club in Bedminster, N.J., with little fanfare and no press or public remarks, and only Department of Veterans Affairs Secretary David Shulkin at his side.
— Stars & Stripes, 11/16/17

The “Forever GI Bill” was signed over two years ago and Executive Director of the VA Education Service and her “team” is only now promoting it?

Must be “the process” and the competence of those implementing it…. 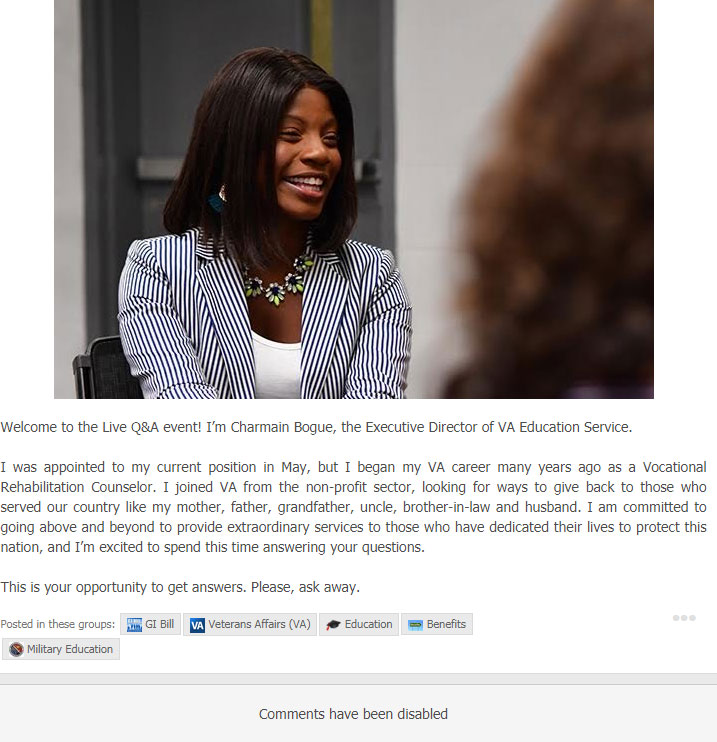 Like the insulting verbiage used by nonprofits where veterans are “clients” as opposed to customers, veterans are dehumanized as “projects” needing a “team” to lead them which explains a lot.

…
We’re again hearing about the infamously ineffective “process” that seldom delivers as promised when it comes to veterans, long after it was promised, if they even know about said promise at all.

Last year, the VA said it would hire 200 temporary workers and shell out $70 million to implement the “Forever” GI bill, which contains 34 changes to veterans’ education benefits and boosts spending by $3 billion for 10 years. Higher-than-anticipated costs has been one of a number of problems that the agency faced in the yearlong charge to implement the plan, which most recently had a July 16 target date that had to be postponed.
— Stars & Stripes, 7/18/18

#BestYearEver… seriously? Have no fear.

The team of leaders will give it another shot.

After catastrophic technology failings led to missed or lower GI Bill payments last year left some student veterans evicted or struggling, Department of Veterans Affairs leaders assured Congress Tuesday that it is prepared to try again. But it doesn’t plan to begin repaying those students until next summer at the earliest.

In 2018, VA spent months telling Congress it was ready to launch Forever GI Bill updates that included changes to the amount of money student veterans or family members using GI Bill benefits would receive as a housing allowance. Some of those students are still waiting to be paid, members of the House Veterans Affairs Committee said Tuesday. VA leaders did not answer questions about how many students were underpaid, or how much they are owed.

While VA leaders told Congress it planned to make those veterans whole and ensure they’re paid what they’re owed, leaders said that may not happen until this time next year. Some students could be repaid as soon as next summer, leaders said.
— Connecting Vets, 11/19/19

As usual, the “VA leaders” are in no hurry because they are safely employed and protected so there’s no real sense of urgency. Meanwhile, a 38-year-old “Executive Director of VA Education Service” was promoted up the ranks and as it sadly appears to be the norm, the approved mandate is oh-so slowly being efficiently implemented and promoted for those who are the rightful, yet still underserved beneficiaries.