Impeachment: The Founders Are Evil Until Democrats Need to Cite Them

In the liberal tradition of inconsistency, we’re seeing more and more Democrats embrace the wisdom of the Founding Fathers to bolster their perceived progress in the looming impeachment of President Donald Trump.

But it was not long ago (and could rear an ugly head again at any convenient time) when these same liberals considered the Founders racist, white men and the national discourse we have today is a direct result of their failed thinking.

However, the Founders’ brilliant system was deemed antiquated and very flawed when Hillary Clinton failed to meet its benchmark. 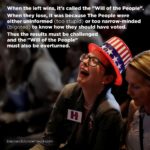 No mention of the liberal Democrat “disenfranchisement” dog whistle when they lose but that’s ultimately what they wish to do, whether it’s devising ways to assure their elections or justifying the removal of a uber-successful president they know they can’t beat at the ballot box and need an insurance policy. When they can’t rely on the American people to do what they want, they find end-arounds and base their actions on what they say the Founders foresaw and defended against.

The Founding Fathers came from all professions of the day. They weren’t professional politicians and may or may not have not been able to predict and prepare for the swamp we have today, but when Democrats praise or hate on the Founders, you can be sure it’s because of something they want; not what’s necessarily best for the country.