In the good old days of what was journalism, the people were presented with actual news; not be expected to take a publication’s word just because they published it.

One would think if the New York Times “obtained” a document of monumental importance to the lives of Americans, we see it. Of course, we’re talking about today’s standards of journalism.

As President Trump presses for states to reopen their economies, his administration is privately projecting a steady rise in the number of coronavirus cases and deaths over the next several weeks. The daily death toll will reach about 3,000 on June 1, according to an internal document obtained by The New York Times, a 70 percent increase from the current number of about 1,750.

The projections, based on government modeling pulled together by the Federal Emergency Management Agency, forecast about 200,000 new cases each day by the end of the month, up from about 25,000 cases a day currently.
— New York Times, 5/4/20

As expected in our world of sensationalism based on “anonymous” or “official” unnamed sources, the document in question is not presented for public inspection.

As the administration privately predicted a sharp increase in deaths, a public model that has been frequently cited by the White House revised its own estimates, doubling its projected death toll.

The Institute for Health Metrics and Evaluation at the University of Washington is now estimating that there will be nearly 135,000 deaths in the United States through the beginning of August — more than double what it forecast on April 17, when it estimated 60,308 deaths by Aug. 4. (The country has already had more than 68,000 deaths.)

Again, that “68,000” death count is still up for debate seeing how official numbers appear to double, seemingly overnight. 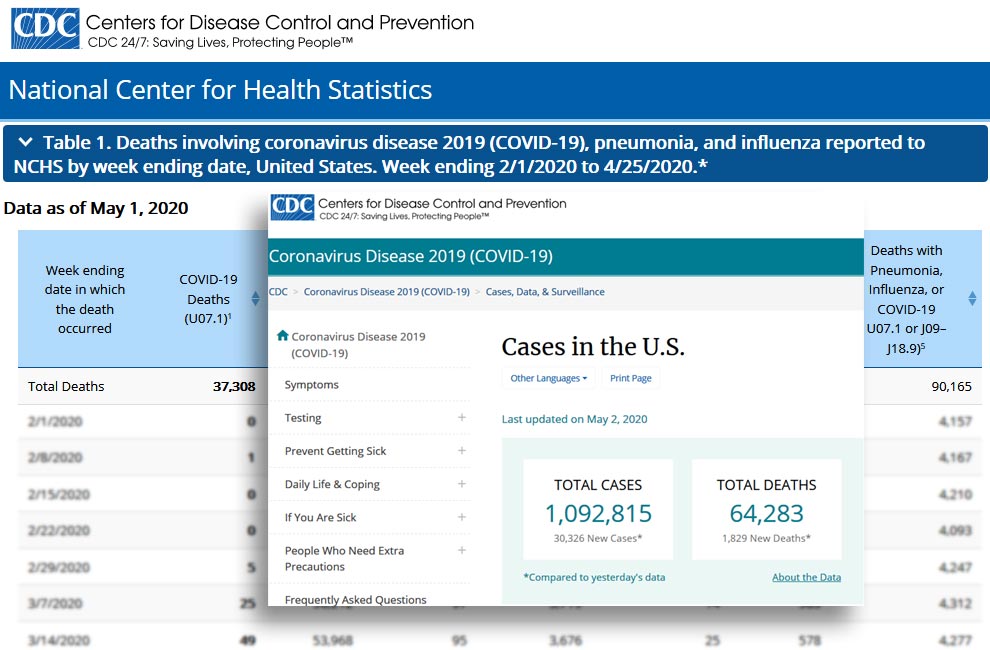 And back to that University of Washington model that was also conveniently not linked to by the New York Times, how many university and agency models have been correct in their predictions so far?

Not very many, if at all.

Regarding the updated models, our analyses indicate that the later models do not show any improvement in the accuracy of the point estimate predictions. In fact, there is some evidence that this accuracy has actually decreased over the initial models.
— An Examination of the Statistical Accuracy of COVID19 Daily Death Count Predictions, 5/5/20

So, the “model” predictions are getting worse, but are yet being cited as fact to influence behavior. One would hope disseminating accurate numbers to the public would be a priority before potentially scaring the shit out of millions of people worldwide, let alone domestically.

We already KNOW, based on a named source, that Coronavirus infection numbers are being intentionally driven up for what has to be political purposes.

Reached via email on Monday morning, Joe Macenka, a spokesman for Virginia’s COVID-19 Joint Information Command, confirmed that each positive case of the disease would be counted as a new case altogether. “If a person is tested on different days, those tests are counted as separate,” he said.

Pressed to clarify the policy, Macenka said that repeat positive cases “are counted as separate cases only if the tests occur on different days. If [a Virginia resident] tested Monday and Tuesday and both are positive, that’s two positives.”

That policy may serve to sharply drive up case numbers, which may in turn significantly delay the re-opening of the state. Virginia Gov. Ralph Northam has stated that the state will begin its first phase of re-opening only when state officials have logged 14 straight days of declining case numbers and hospitalizations.
— Just The News, 5/4/20

It would be naive to assume that this is only happening in blue Virginia.

Here’s the problem for the left. Americans, not blessed by uninterrupted paychecks, want to get back to work. Americans are tired of being told to stay at home for the sake of not sharing a virus no one can see and fear ramped up for the obvious benefit of a political party facing a presidential and down-ballot ass whuppin’ in less than six months.

Politicians and their media could give a rip about the economy and all those dependent on its success for daily survival. It’s all about beating President Trump and if they have to make shit up along the way, it’s not like they haven’t done this before.