COVID-19 Bringing Out the Best (Worst) in the ‘Progressive’ Left

Let’s start with a one-liner that puts this all into proper perspective…. 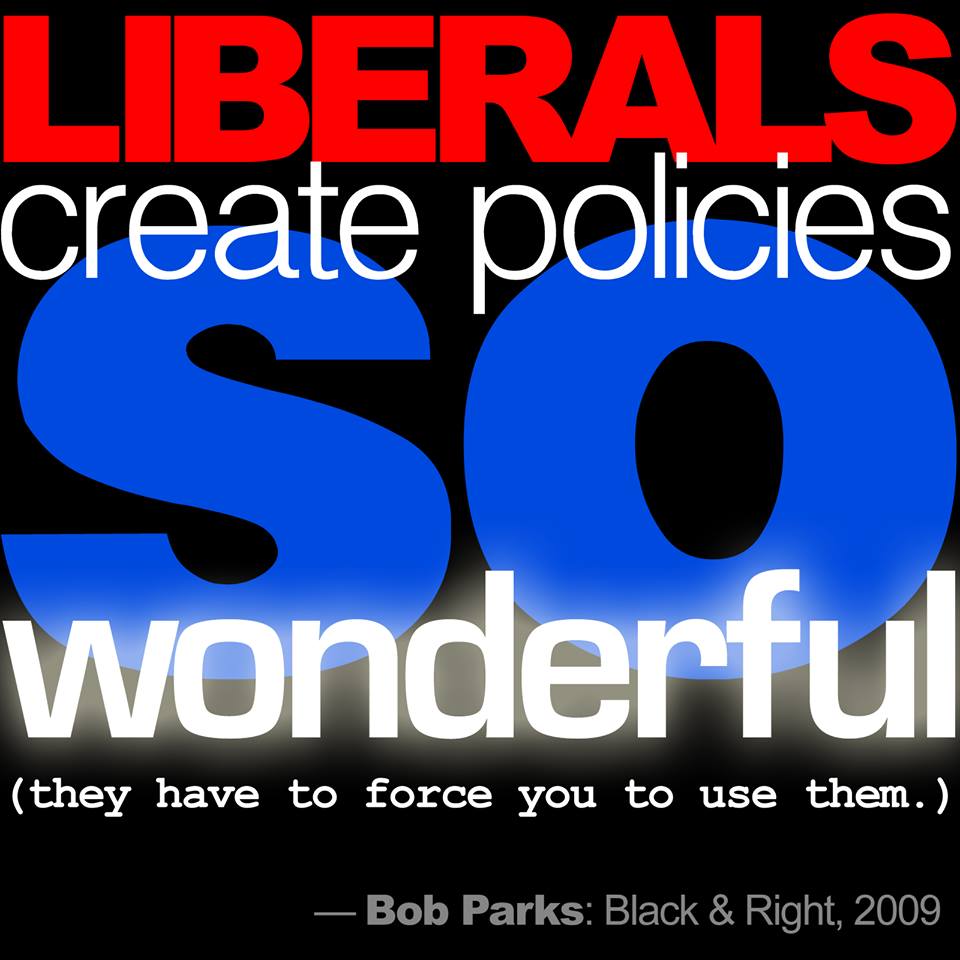 Couple this with loudmouth, whiny progressives who lament, are panicked, frightened, terrified should (heaven forbid) their fears not be immediately respected, everyone else must accommodate them, no matter how irrational or hysterical.

“It was a beautiful day; it was really crowded. We noticed that there were so many people without masks,” Debony Hughes says, recalling that it made the friend she was with particularly angry. “She started screaming out of the car, ‘Put on your mask! Where’s your mask!'”
— NPR, 4/28/20

While there are too many who’ve determined that not observing their #SocialDistancing policy will get us all killed, not all are onboard.

The left was so proud of their #resist movement against an elected politician they didn’t approve of, but when their preferred-elected promote edicts they demand all constituents obey, things get hypocritically stupid.

An army of self-deputized informants has transformed online forums into venues dedicated to unleashing the police on those they perceive to be lax in the observance of gubernatorial edicts.
— Commentary Magazine, 5/6/20

The upside is our publicly witnessing them for the unhinged freaks they are.

Utah mother selling social distancing penis face masks raises $56K for non-profit, so far
“When someone tells me my mask has penises on it, I kindly let them know this is how I determine they are too close, kindly back the fuck up.”

We thank Facebook for clarifying that male genitalia on masks is acceptable to their ever-evolving community standards.

In the proud tradition of the Third Reich’s brownshirts, liberal Democrats are unleashing their Hitler youth to rat out those who won’t adhere to their demands, under color of their definition of the law.

Largely confined to their homes and worried about the spread of the coronavirus and its risks to their own health or that of loved ones, a segment of the United States has turned informant, calling the police, public health authorities and the employers of people they believe are violating social-distancing decrees or stay-at-home orders.
— New York Times, 5/4/20

Of course, as we are talking about the “Hey hey, ho ho” left, sometimes their requirements borderline the hilariously absurd. 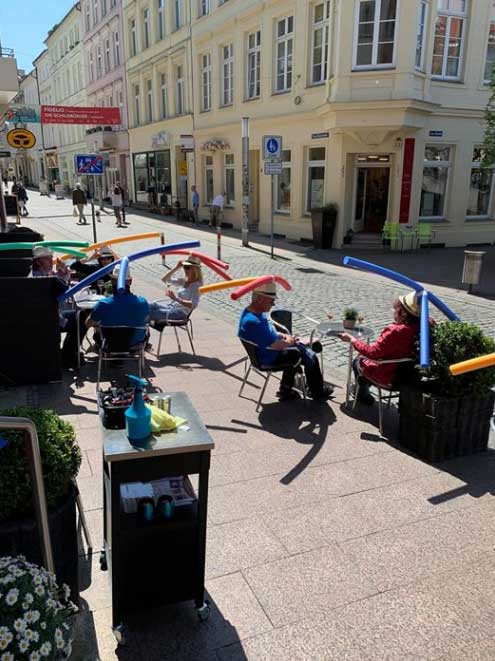 Those on the right side of things would look at these goofy-ass “hats” and prefer to frequent cafes that didn’t demand we look like idiots on the street just for the privilege of spending our money there. But it gets even more stupid for appearances sake. 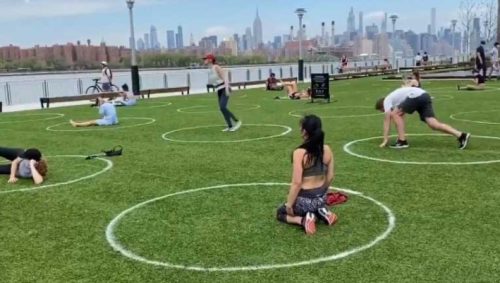 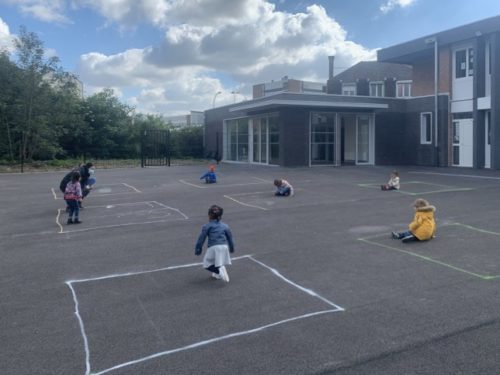 Circles, squares; keeping things simple for intellectually-superior liberals to comprehend and dutifully observe. Other imagery is again proving intolerable to the intolerant.

Spanish authorities are investigating Cardinal Antonio Cañizares for opening the doors of the Basilica of Our Lady of the Forsaken and displaying an image of the Virgin for the faithful. The action brought various Catholics to the front doors, violating social distancing guidelines, which in turn brought charges from social media and an investigation of the cardinal for encouraging the gathering.
— Church Militant, 5/12/20

So much for the left’s demand for “separation of church and state”.

Inspired leftists also found a means to incorporate their penchant towards performance art into their pandemic panic mandates.

No, not those kind of blow-up dolls… at least in that restaurant.

Note to perpetually-outraged #SJWs: according to available images posted online, all of the restaurant’s blow-up dolls are white. Just sayin’.

In another illustration of the absurdity in their off-the-cuff Coronavirus inventions of the mind, the mayor of Los Angeles decided their legendary traffic needed an official title to add to the pain.

Garcetti says that Los Angeles won’t reopen until there’s a Coronavirus “cure”. Imagine if he held that same standard to another virus that’s never seen an effective vaccine: the common cold.

In order to belatedly stave off inconvenient comparisons to brownshirt-Hitler-youth tattlers, more progressive re-branding was necessary.

How many so-called “ambassadors” roam the streets, looking for those who aren’t obeying their fearless leaders and reporting them for possible detention and/or arrest? Redefining words when it suits their agenda again.

Given the nature and stereotype of the “rap group”, why would anyone expect them to obey the law, let alone what’s supposed to be a temporary guideline? Outside of some Democrat mayors, it appears the most angry about the infringment on their growing safe space are white liberals, and liberals are liberals worldwide.

The lockdown has revealed some interesting character traits in our fellow citizens. Right now, it’s Lord of the Flies on social media and people are turning on one another faster than ferrets down a Yorkshireman’s trousers. The suburbs are infested with the kind of people who, had they been living in Berlin in 1938, might have been inclined to whisper, “Psst, Sturmscharführer, there are Jews living in number seven.”

I have never seen white South Africans so demanding, judgemental and united in wanting to “do the right thing”. If only they had been this outspoken during apartheid. Facebook is awash in posts from self-appointed informants – people who were almost certainly prefects at school. In my area, a woman is asking if anyone has a drone to monitor the streets. Ideally, I imagine, a weaponised one capable of swooping in and firing poisoned darts into an errant cyclist’s back.
— Ben Trovato, 4/12/20

And how about some new accessories for the tech-dependent snitches?

Obviously, this will not only tell the wearer when he or she is too close to another individual, but it probably collects data on how many “violations” were performed. How long before it can (and will) deliver electric shocks, just like those wonderful dog collars that punish when a boundary is breached?

Friends Are Breaking Up Over Social Distancing

This is purely a personal problem. 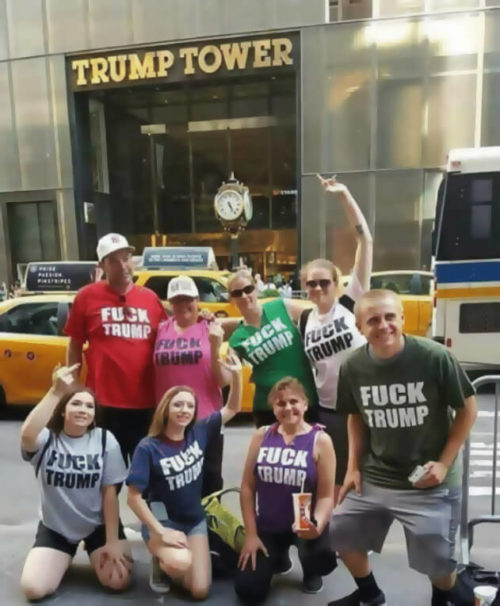 While conservatives tolerate liberals sharing their environments, we’ve seen and heard of numerous instances where leftists freak out if their precious areas are polluted by speech or imagery they find personally offensive, even to the point of having said offender fired and/or expelled. If anyone is losing friends, it’s liberals who extract themselves from those who dare not capitulate to their demands of social distancing.

Next they’ll be lamenting their self-imposed, lonely, COVID-19 mental illness.

“The mental health and well-being of whole societies have been severely impacted by this crisis and are a priority to be addressed urgently,” Devora Kestel, head of the W.H.O.’s mental health department said.
— New York Times, 5/14/20

Like any and all those who’ve recently died and having it being documented as a result of COVID-19, liberals will try to blame their psychosis on the virus. But like other variations on the Coronavirus theme, progressive insanity has long since predated the current pandemic even though the symptoms are now much more pronounced.