Years ago, Rush Limbaugh simply said “Words mean things”. We also know that when words become inconvenient, liberals just up and change things and are met with limited (if any) resistance.

For example, “blue” states were Republican and “red” states were Democrat. That went back in forth when color televisions became more mainstream and the change to Republican red and Democrat blue was made official in 2000 and not without disagreement.

“There are two general reasons why blue for Republican and Red for Democrat make the most sense: connotation and practice,” Republican operative Clark Bensen wrote. “First, there has been a generally understood meaning to the two colors inasmuch as they relate to politics. That is, the cooler color blue more closely represented the rational thinker and cold-hearted and the hotter red more closely represented the passionate and hot-blooded. This would translate into blue for Republicans and red for Democrats. Put another way, red was also the color most associated with socialism and the party of the Democrats was clearly the more socialistic of the two major parties.”
— Smithsonian Magazine, 10/31/12

We all see why this re-branding was accepted by the left.

Most of us know what racism is. Some of us have experienced it and it falls most in line with the Merriam Webster definition #3: racial prejudice or discrimination. 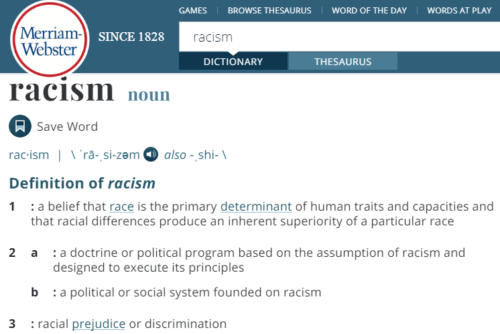 But thanks to the #woke youth who are redefining anything to meet what affords them the most comfort and/or cover, “racism” is on the verge of being redefined.

Kennedy Mitchum wasn’t expecting much when she emailed Merriam-Webster last month, but she wanted to let the dictionary publisher know that she thought its definition of the word racism was inadequate. Mitchum said she sent her email on a Thursday night and got a reply from editor Alex Chambers the next morning.

After a few emails, Chambers agreed that the entry should be updated and said a new definition is being drafted.

“This revision would not have been made without your persistence in contacting us about this problem,” Chambers said in the email, which was provided to CNN. “We sincerely thank you for repeatedly writing in and apologize for the harm and offense we have caused in failing to address this issue sooner.
— CNN, 6/9/20

What a kiss-ass response of yet another business in fear of possible mob attack and cancellation; a response to one person, a 22-year-old, whose repeated rationale for making the change starts with “I think…”.

This latest #BlackLivesMatter cycle has featured some rather inconvenient realities, especially with millennial whites given permission to shout at black police officers; an action that would not be accepted in more rational times. Blacks are being excused when taking abusive (if not violent) actions towards whites. Changing the definition of racism is not for the inclusion of “systemic” but to provide cover for liberals who are racist to be racist and not suffer criticism.

Words mean things. Racism is racism and there was never meant to be qualifiers.