In the latest instance of the political class exerting their self-proclaimed superiority over those they wish to “serve”, the media is having an appropriate cow over Florida Republican who literally pulled the “Do you know who I am?” card on video.

Martin Hyde, a congressional candidate from the Sarasota area, has released a public apology following a recent traffic stop where he threatened to end the career of the officer who pulled him over.

“Not proud of it” because he was being a pompous jerk or because video of his belligerence was capture and gleefully shared by the media?

Hyde appears to be one of the class of political people (whom he later bitches about) who get into politics, not to be public servants defending the values of his constituents, but to rise in the ranks to the sole personal benefit of themselves. Of course, Hyde’s actions now reflect badly on the Republican Party as a whole during a time when conservatives are routinely mocked by the Democrat left for being supporters of law enforcement.

In the video, the female officer explains to Hyde that he is being pulled over for speeding and texting while driving. Less than 30 seconds into their interaction, Hyde says to the officer, “you know who I am, right?” He then tells her, “I’ll just call the chief, how about that?” The video shows Hyde question the officer’s nationality when she returns with citations for speeding, texting while driving and failure to produce a registration. “Is it your Russian immigrant status that makes you talk to people like this?” Hyde asked.

Even after being busted and supposedly acknowledging is wrongdoing, Hyde still tried to offset his actions meaning he really hasn’t learned anything from this episode.

Hyde is challenging Rep. Vern Buchanan in a Republican primary for the chance to represent Florida’s 16th congressional district in the U.S. House of Representatives. He said if he wasn’t running for public office, he’s not sure his recent interaction with officers would be a big deal.

After mounting pressure, Martin Hyde did what busted Democrats seldom do: he appears to be dropping out of the race, but not before playing the martyr and throwing slings and arrows at detractors AND his party….. 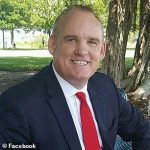 I am sorry because in a democracy without congressional term limits, I have taken away the opportunity for people to make changes in a stagnant system that rewards incumbency over innovation and true local representation.

I was prepared to use my limited resources to mount a congressional campaign based on equity as opposed to elitism – which is the irony of the manner of my demise.

I hope that the hundreds of calls that I got on my cellphone – from all over the United States – telling me what a fat, entitled person I am will not only get me back to eating properly, but to also be mindful that it is how we are at our worst that defines our progress as adults.

I will end on a positive note – positive, that is, in terms of being liberating because I will not be constrained by towing the party line going forward.

The Sarasota County Republican Party is controlled by a small group of self-appointed elites and special interests that I have never liked – and now I can say that. All of the current statehouse representatives, with the exception of one, are from wealthy, influential families who used their money to get them into office. All of them crave higher office despite doing nothing to have earned the elected offices that they now hold. And until we do something about this form of elitism, my childish behavior will pale in comparative importance.
— Martin Hyde, 2/25/22

Martin Hyde is clearly someone who (again) was not properly vetted, ingratiated himself within the conservative elite after insulting their supporters, to the delight of a seasoned-red-meat media that gives scant attention to Democrats who’ve done the same, if not worse.

In a letter published in the Herald-Tribune during Donald Trump’s initial bid for President, Martin Hyde wrote that Trump was “wretched,” — synonymous with “vile,” “odious,” and “worthless” — and he said he was “horrified” by the “bigotry and bullying” of Trump supporters.

Hyde’s anti-Trump rhetoric clearly wasn’t enough to dissuade Roger Stone from turning down a five-figure monthly retainer from a candidate who ended last quarter with a paltry $6,283 cash-on-hand. But Stone wasn’t the only pardoned MAGA celebrity to rebuke Trump and get behind Hyde. Trump’s former National Security Adviser Michael Flynn, who pleaded guilty to lying to the FBI (twice!), also endorsed the million-to-one shot congressional candidate.
— Florida Politics, 11/15/21

Let’s hope this is the end of the line for people like Hyde. We have enough people like this in the party, not to mention politics in general, and their ascendance only gives the appearance of acceptance.