A Tale Of Two Inaugurations: Progressive Examples of Civility

Many of us are already sick of the liberal activist/media gloating; celebrations they demanded we tone down when George W. Bush was victorious. 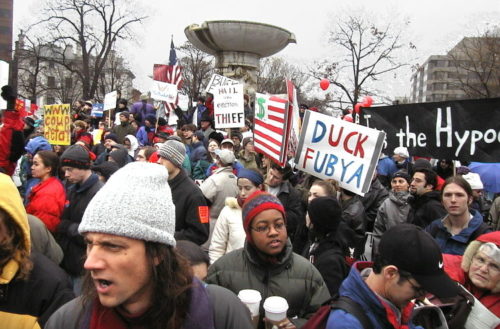 If anything is going to rile up the right, it is the gloating.

Refresh my memory if I’m forgetting something, but when President Bush was inaugurated in 2001, I don’t remember promos this blatantly triumphalist even on Fox News. It passive-aggressively defies you to disagree with it, as it asserts that this guy who hasn’t even been sworn in yet will undeniably be an inspirational, nay, an historic figure. Even if you didn’t vote for him, you have to admit that Jan. 20 will be a truly amazing day. Right?You have to admit it, right? Well, admit it!

We’re being told to join in the nationwide celebration (like we have a choice), but not all were respectful on past January 20ths….

Tens of thousands of people took to the streets of Washington Thursday to protest the inauguration of George W. Bush for a second term as US president. Many lined the route of the inaugural parade, booing and jeering as Bush’s limousine made its way down Pennsylvania Avenue. “Not our president,” some chanted.

Can anyone out there imagine the high frequency squealings that would be emitted if Republicans protested the Obama inaugural parade, chanting “Not our president”?

While coronation festivities were under way in Washington for President Bush Thursday, local residents performed a mock inauguration on a live bush — the plant — in protest. Ducking catcalls and hoots from supporters of President Bush, about 35 students and Athens residents staged a noisy but peaceful “counter inauguration” Thursday afternoon at the Arch.

One sign read, “He ain’t my president. Disappointed? Yes. Defeated? No. Continue to speak out.” The sign was held by 55-year-old Drago Tesamoveich, a resident of Colbert. “People need to continue to speak out to show that the president doesn’t have a mandate,” he said.

Let’s not forget that while Barack Obama’s win was “historic”, a 53% popular vote win isn’t a mandate. Then again, we know how words like “mandate” changes its meaning when interpreted by a victorious or defeated left.

And this isn’t a recent phenomenon.

Thousands of people in dozens of cities across the nation walked out of work and school, held mock coronations, intoned the names of the Iraq war dead and held candlelight vigils to show their disapproval of President Bush as he was sworn in for his second term.

“The administration thinks it’s got a mandate to continue its policies,” said David Williams, a 49-year-old construction company owner from Oakland, Calif., who wore a T-shirt to the San Francisco march with Bush’s picture and the description, “International Terrorist.”

If Republicans were to throw bottles, tomatoes, an egg, and burned an American flag while Obama’s motorcade “crept” by, just what do you think the outrage level on the left would be? This, by the very same now instructing us to be respectful.

George W. Bush’s motorcade crept through the largest inaugural protests since Richard Nixon on Saturday, enduring thousands of protesters who hurled insults at the newly installed president. Some threw bottles, tomatoes and an egg and one demonstrator burned an American flag atop a lamppost.

Protesters clashed briefly with police clad in riot gear at a few flash points while Bush remained inside his armored stretch car for most of the parade up a soggy, cold Pennsylvania Avenue.

I wonder if all those Obama supporters who “pushed back” during the campaign see just how immature they come off as. They can be as rude as they want to a president they didn’t support, yet got down right ugly when you didn’t support their guy.

Demonstrators turned out in droves on Saturday — a miserably gray and drizzly day, with temperatures hovering in the mid-30s — to protest the Inauguration of President George W. Bush, whose election was contested all the way to the Supreme Court. Police would not estimate the size of the crowd, but many thousands of protesters were in evidence.

“The level of people on the streets shows that people are really upset about lack of democratic process,” says Liz Butler of the Justice Action Movement, the umbrella organizing committee responsible for the protest. “They took it to the streets. We saw tens of thousands. We saw far more protesting Bush than supporting him.”

They came out in scores, co-existing on the parade route with supporters of the new president and lining Pennsylvania Avenue from the Capitol to the White House. Interspersed between Bush-Cheney signs and Texas flags were thousands of protest placards, bearing inscriptions such as “Bush Cheated,” “Hail to the Thief,” “Selected not elected,” “Bushwhacked by the Supremes” and “Golly Jeb, we pulled it off!” There were also plenty of R-rated signs, like “Dick and Bush” and “George Wanker Bush.” One poster included a caricature of a metaphorically toothless Bush in the image of Alfred E. Neuman.

While the liberals gather and celebrate in ways that would send them off with razor blades to bathtubs with warm water had we had won and gloated in this manner, I will sit silently, seethe, and mentally prepare a hit piece for the next Republican who asks us to be tolerant and inclusive.

I will tactfully remind them that our liberals don’t observe the rules they issue for the rest of us to observe.

During the next Republican victory, I will gloat my ass off. I will show these pictures (and a lot more) to remind the lamenting left that we were classy. We were respectful. We toned it down as they asked, and what did we get for it?

You ain’t seen nothin’ yet.