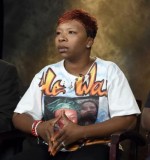 The apple clearly doesn’t fall far from the tree.

The mother of Michael Brown could be charged with felony armed robbery for allegedly attacking people in a Ferguson, Mo., parking lot because they were selling T-shirts honoring the late teenager.

A copy of the Ferguson Police Department report was provided yesterday by city attorney Stephanie Karr. When TSG requested the document two weeks ago, Karr noted that Brown’s mother, Lesley McSpadden, was “described in the report” and had “specifically requested that the report be withheld from the media.”
— The Smoking Gun, 11/6/14

One person was hospitalized in the reported attack and another unidentified alleged victim was reportedly beaten with a pipe. “You can’t sell this shit,” McSpadden allegedly said, according to the report.

McSpadden’s former mother-in-law, Pearlie Gordon, was among those beaten by “a large group of about 20-30 subjects” who had “jumped out of vehicles and rushed” the group of sellers, according to the police report. 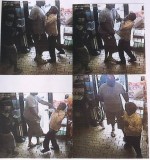 This couldn’t be all about the money, could it?

Have you noticed how much attention the Palin family brawl has garnered, yet there is very little reporting of this incident?

Ferguson racebaiting, police-taunting opportunists are going to raise hell once the grand jury absolves officer Darren Wilson of the desired premeditated murder of innocent bystander Michael Brown, yet his own mother shows that violence appears to be in the family blood.