It’s called bias-by-omission for a reason and the left is really good at it. For too many, if they didn’t see or hear about it on their favorite news source (New York Times, Washington Post, NPR, Democracy Now!, CNN, MSNBC, etc.), it didn’t happen, so it’s understandable common sense can be challenged.

Over the past decade, attackers motivated by right-wing political ideologies have committed dozens of shootings, bombings and other acts of violence, far more than any other category of domestic extremist, according to a Washington Post analysis of data on global terrorism. While the data show a decades-long drop-off in violence by left-wing groups, violence by white supremacists and other far-right attackers has been on the rise since Barack Obama’s presidency — and has surged since President Trump took office.
— Washington Post, 11/25/18

A “a decades-long drop-off in violence by left-wing groups”… really?

Maybe this is where the left can play word games to further their intentional deception by using the operative word “groups”, implying organized violence as opposed to a lone Bernie supporter who tried to kill federal lawmakers and their staffs.

BTW — That insignificant incident was afforded two sentences in paragraph 22.

Among the most deadly left-wing attacks were the 2016 killings of eight police officers in Dallas and Baton Rouge by gunmen sympathetic to the Black Lives Matter movement. One of the most prominent was last year’s attack on Republican members of a congressional baseball team, including House Majority Whip Steve Scalise (La.). The gunman, James Hodgkinson, had raged against Trump online and was a supporter of Sen. Bernie Sanders (I-Vt.).

There were a few more “assassinations” of police officers and sheriffs all over the country following President Obama’s anti-law enforcement rhetoric after the deaths of young black men; too many of whom would be alive today had they been home at a decent hour and not out committing crime. Yes, that’s judgmental and also a reason why millions of black men over the age of 50 are still alive today.

While the Washington Post will have too many believing that political violence is all the rage on the right, even some liberal news outlets had to allow a more accurate depiction be printed.

You need not cross the shining seas to experience violence, destruction of property and a general dismantling of liberal values from the political left. You could simply visit America’s elite college campuses like Yale or Middlebury or Berkeley, where tomorrow’s leaders attempt to shut down conservative voices with protest or riots. At Middlebury, rioting students landed liberal professor Allison Stanger in a neck brace for the crime of defending a conservative academic’s right to speak. At Berkeley, mobs of students created a “war zone” ahead of a planned visit from conservative provocateur Milo Yiannopoulos, injuring Trump supporters and causing $100,000 in damages.

Or head to Portland, Ore., one of the most liberal cities in the nation in the heart of the progressive Pacific Northwest, which this month Politico labeled “America’s Most Politically Violent City.” The progressive paradise — where Republicans are virtually an extinct species — has witnessed millions in damages attributed to the same types of anti-fascists-in-name-only that kept Hamburg residents paralyzed in fear this month. A “counter-protest” to a planned pro-Trump rally landed 14 antifa in jail for attacking the police with explosives and bricks.

Witness the blood-soaked congressional baseball field in Alexandria, Va., site of the June attack on U.S. Rep. Steve Scalise, R-La., and other Republicans batting up for their annual bipartisan game. James Hodgkinson, a “fervent supporter of progressive politics,” showed up to the field with a rifle, a handgun and a hit list of Republicans. As Scalise fought for his life, MSNBC host Joy Reid felt conflicted: The attempted assassination was a “delicate thing” because of Scalise’s conservative views like opposition to gay marriage. “Are we required in a moral sense to put that aside in the moment?” she wondered. Yes, Joy, you are. The shooting of a mainstream, congressional Republican leader is reprehensible, and in no way justifiable.
— Chicago Tribune, 7/18/17

This is not to say there are no troublemakers on the right. There are, but way too many times they are the small in number and rather insignificant.

But it’s also helpful to accept a pattern.

These small and insignificant “right wing” groups (that many Republicans and conservatives have never heard of, until…) plan a protest. The left hears about it, mobilizes hundreds to counterprotest via social media, the alleged right wing group mobilizes hundreds in response and we have a Charlottesville where people are injured, killed… and it’s blamed on the right. Had the tree fallen with no liberal to hear it, think of all the dollars saved and lives spared.

When the left organizes a protest, business owners routinely board up their storefronts as routine preparation. A massive law enforcement presence is mobilized. You see people in blue safety vests with large white “ACLU” letters reminding those with ill intent whom to see once they get arrested. Large areas are reserved for the detention of agitators.

While the right protests for free speech, the left uses words that imply a pending outcome of violence. They defy common rules of decency with displays of vulgarity to inflame “both sides”. 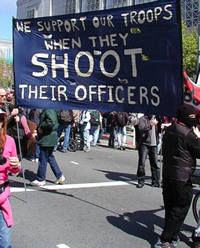 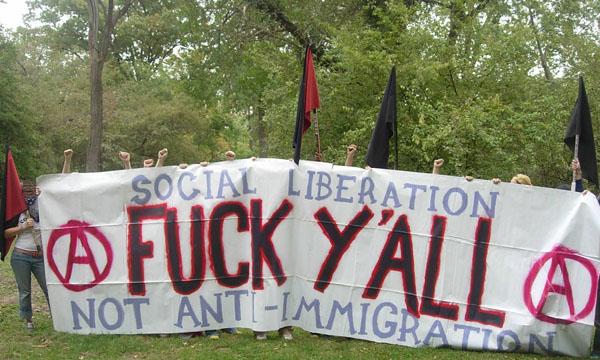 For too many in the national news media, riots in primarily black neighborhoods make for great television and at least one old fart media pundit erroneously labeled the well-known, mostly white #Antifa an “African American organization” and has yet to issue a mea culpa, let alone an on-air correction.

Probably because their masks and clothing are black. It couldn’t be anything else, right?

The left is triggered into conniptions when anyone dares compare the violence on the right and left. President Trump was vilified for a few news cycles after the death of a Charlottesville protester when he condemned “both sides” while anyone with an Internet connection can find far more examples of massive protests in metropolitan areas, the intentional disruption of uninvolved commuters, and the millions of taxpayer dollars it always takes during and after left wing demonstration that almost always take that violent “mostly peaceful” turn.

It’s past the point when the media tells us to look one way, it’s best to look the other.

And let’s not forget how the left and their media poo-poo the numerous hate hoaxes meant to fraudulently blame the right for continuing liberal dementia.

But it’s also best to remember what liberal leadership thinks of their own and we see why the Washington Post’s bullshit has a stink that will stick long before it’s stepped in.