It’s bad enough Elizabeth Warren was allowed to pass herself off as an American Indian in order to take advantage of minority status, programs, discounts, and progressive sympathies.

We now have another case of a liberal using minority status. It’s yet to be determined as to what benefit….

A day after the parents of Rachel Dolezal, the President of the Spokane Chapter of the NAACP, said she has been misrepresenting herself as black for years, the NAACP says they are standing by Dolezal.

As usual, if you remember the Los Angeles Chapter’s “black holes” public exhibition of racist stupidity, it would appear the Spokane NAACP is more interested in not looking irresponsibly gullible, and are doubling down for some unknown reason.

For 106 years, the National Association for the Advancement of Colored People has held a long and proud tradition of receiving support from people of all faiths, races, colors and creeds. NAACP Spokane Washington Branch President Rachel Dolezal is enduring a legal issue with her family, and we respect her privacy in this matter. One’s racial identity is not a qualifying criteria or disqualifying standard for NAACP leadership. 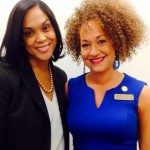 Knowing the NAACP as we know the NAACP, we’re expected to believe if a “white” Rachel Dolezal walked into their office and expressed interest of being their branch president, they’d embrace her with open arms. Puh-leez….

Today’s National Organization for the Advancement of Colored People would laugh her out of the office.

There has to be something here that has yet to be made public. It’s clear Ms. Dolezal has engaged in some kind of racial mischaracterization, created a “hate hoax” as a way of garnering sympathetic attention (as liberals have done numerous times in the past).

And it appears her parents know a little something about her and have no problems throwing her under the bus.

Dolezal, a multi-media artist, professor of Africana studies at Eastern Washington University and former instructor at North Idaho College in Coeur d’Alene, has reportedly made similar ethnicity claims to local media outlets. In recent years, she has portrayed herself physically, and on social media platforms, as a woman of black African-American heritage.

However, her parents, Ruthanne and Larry Dolezal, who are both white and live in the Troy/Libby area in Montana, told The Press their daughter is not African-American. They backed up the claim with a copy of their daughter’s birth certificate and photos. The images show a younger, pale, blonde-haired, blue-eyed Dolezal who looks much different than the woman with caramel-colored skin now leading the Spokane NAACP and helping review claims of police misconduct in that city.

“Rachel is very good at using her artistic skills to transform herself,” Ruthanne said in a recent telephone interview.

And Rachel’s told whoppers that her parents are almost gleefully revealing.

What this seems to imply is Rachel Dolezal is either crazy or a raging bitch her parents couldn’t wait to publicly embarrass and they were apparently extremely patient knowing the opportunity would come (and it sure did).

Can you say “pathological”?

And sorry, if an institution as racist as the NAACP can’t tell the difference between a black woman and a white woman, what does that say? Then again, their former national president was the whitest black man many of us have ever seen.

Remember, we’re talking about a liberal, Democrat liar who must be excused as long as possible.