From personal experience, racism is freely directed at black conservatives and tolerated on social media. However, racism only seems to become a media narrative of outrage when it’s directed at Democrats. We also know that way too many instances of racism are created by liberals to generate sympathy for select causes.

With that, a health amount of skepticism should be directed at the latest allegation of racism, this time directed at Michigan House Representative Cynthia A. Johnson who took her complaints on the customary liberal media sympathy tour.

Note to Rep. Johnson: the next time you go on national news and make yourself out to be the next civil rights champion, have a change of clothes before issuing threats of violence to those you oppose politically.

Not to say that it’s never occurred because people are people, but I’ve never experienced racism from Republicans and/or conservatives. But it will also be interesting to see how many of those who supposedly sent those racist communiques are actually apprehended. Michigan Governor Gretchen Whitmer claimed to have been a potential kidnap victim but I don’t recall any follow-up as far as law enforcement interventions as a result.

Could this be yet another hate hoax from someone who desires affirmation or maybe trying to misdirect attention from something politically inconvenient?

State Rep. Cynthia Johnson and Chinese Consul General Zhao Jian had a friendly game earlier this month at the Coleman A. Young Municipal Center during an event to celebrate the 40th anniversary of diplomatic ties between the U.S. and China. The upbeat event was in contrast to the high-profile trade war between Washington and Beijing. To encourage Beijing to reform its trade practices, the Trump administration has imposed import taxes on billions of dollars worth of Chinese imports. China has retaliated.

Those working to grow deeper ties between China and Michigan offered thoughts on the tensions and their impact.
— Detroit Free Press, 9/21/19

Many Americans have justified suspicions regarding Communist China and may look at the cozy relationship between Rep. Johnson and Chinese interests as traitorous. Traitors used to be hung from the “gallows” back in the day and any subsequent references to “lynching”, IF they happened at all, should be looked at in proper context.

But it appears enough became enough. 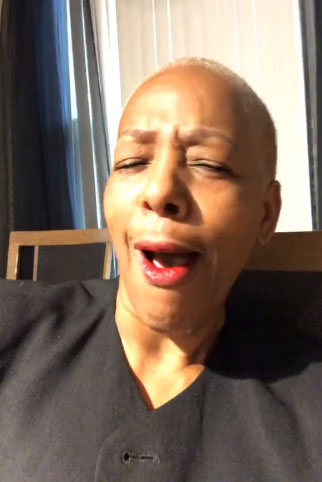 Republican leaders of the Michigan House of Representatives have removed Rep. Cynthia Johnson, D-Detroit, from her committee assignments in response to a video she posted Sunday on Facebook. At the end of a roughly three-minute video posted Tuesday evening to Facebook, Johnson referenced law enforcement tracking down someone who made a threat against her before issuing what she called a warning.

“Threats to either Democrats or Republicans are unacceptable and un-American. They’re even more unbecoming of an elected official. Rep. Johnson has been removed from her committee assignments, and we are looking into further disciplinary action as the proper authorities conduct their own investigations,” Chatfield and Wentworth said in the joint statement.
— Detroit Free Press, 12/9/20

While racist anything is improper, such comments are protected First Amendment-protected speech. Threats are another thing. We’ll see if there are law enforcement ramifications for the callers or if this just fades away like those supposed death threats against the Michigan governor have.