DNC Thanksgiving Talking-Points: (How Dumb IS Their Base?)

We all know arrogant many liberal Democrats can be. Some consider it beneath them to even have to take precious time to discuss an issue, thus you wind up seeing them from the rear as they walk away from a possible discussion in sheer disgust.

But it appears the Democrat Party believes their base is so stupid, they have to provide them with “talking points” for the Thanksgiving dinner table as to rebut any ugly right-wing propaganda that might pollute an otherwise perfectly liberal holiday get together.

It’s that time of year — full of food and fun and celebrating with family and friends. But we here at the DNC know that occasionally all that togetherness can lead to some… let’s call them “lively” conversations about politics with that one Republican uncle (or aunt, or brother — you know who I’m talking about). And as Democrats, it’s up to each of us to go into those situations ready with the truth.

So I’m officially deputizing you to serve as a Deputy Democratic Spokesperson this holiday season — and giving you special access to all the facts you could ever want.

We’ve designed a handy website with the perfect responses to all the most common right-wing talking points spouted by your family members who may spend a little too much time tuned into factually-challenged conservative talk radio. Click here to check it out.

When it comes to the economy, health care, climate change, and immigration we know there are the facts, and then there’s what Republicans want to believe. But don’t blame your Republican relatives too much — after all, they’re only taking after the GOP’s presidential candidates and their loose interpretation of reality.

That’s why we have this handy guide compiled, so you can do your part to debunk the latest myths coming from the right wing bubble. Make sure you check it out before turkey-time:

Thanks for doing your part! I’m so glad to have you on the team.

Have a great Thanksgiving!

Note the liberal assumption that men are evil, thus it’s that intolerable “Republican Uncle” who’ll be the one to fuck up Thanksgiving. 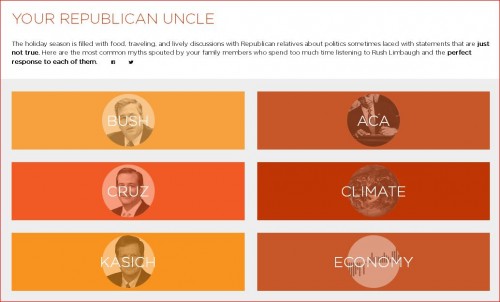 The holiday season is filled with food, traveling, and lively discussions with Republican relatives about politics sometimes laced with statements that are just not true. Here are the most common myths spouted by your family members who spend too much time listening to Rush Limbaugh and the perfect response to each of them.

Translation: You’re most likely to be sandbagged by some obnoxious Republican in your family during a time when you just want to relax and enjoy that ambiance with loved ones. Sadly, you’ll be inundated with untruths and here are the crib note answers, seeing how you’d be flustered and caught off guard by the rude, homophobic, misogynistic, jingoistic, racist, right-wing lies.

As things are only believable to the left when they come from their certifiable sources….

And suggestions even came down from the White House.

As people sitting around the Thanksgiving table talking about these issues as they should and I’m sure they will all across the country, I hope that’s a question that will be raised and asked by members around the table.
— Josh Earnest, White House Press Secretary

Look, we’re talking family and it’s not like you can dis-invite them, then again try being a black Republican in a Democrat family where physical bans routinely occur.

But should your Democrat aunt or know-it-all, college student-mooch decide to pull a get-in-your-face around the dinner table, let them spout. Tell he or she what you didn’t have to memorize and when you get that familiar “There’s nothing more to talk about!”, you’ll find your Thanksgiving dinner will almost immediately become more enjoyable because your liberal relative has more than enough incentive to keep that mouth shut.

That is, until it’s time for more free food.