NO ONE affiliated with the #NeverTrump spoiled-brat, “vote your conscience” coup should be supported monetarily. The following are those “principled conservative” entities actively working behind the scenes to disenfranchise millions of Trump voters; they should be shunned and ALL nonprofit donations given to more worthy recipients… 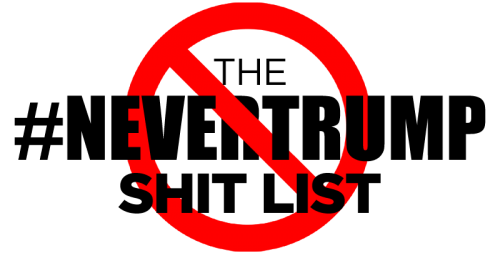 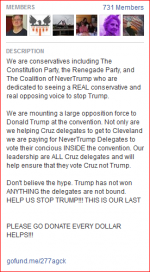 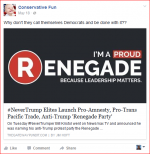 Unelected “conservative leaders” told us, in no uncertain terms, who THEY decided was worthy of Republican support… who was not and why.

6/25/16 — The #NeverTrump forces are proceeding full speed ahead with their scorched-earth attempt to unbind the delegates Donald Trump earned by winning the Republican primary process with historic popular vote numbers. 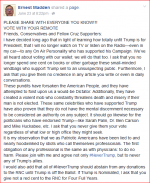 Hillary supporters are clearly afraid of Donald Trump while ego-driven, so-called “conservatives” have gotten with the Democrats’ program.

Appeal to GOP delegates: Please save your party from Trump — you still can
What Republican leadership failed to understand was that this voting bloc wasn’t stupid enough to not notice that the GOP was selling them a bill of goods it had no plan to actually deliver. The Supreme Court, Executive Branch and Democratic Party were never going to allow the United States to roll backwards into the outright legal bigotry of the early 1900s. While Republican voters thought they were electing James Dobson, the GOP was really selling Joel Osteen to them in a Pat Robertson mask.
— Salon, 6/25/16

These same anti-Trump delegates were perfectly happy with popular votes when it came to them getting elected, and should they succeed in stealing the bound delegates from Trump in Cleveland, these so-called (ex)”principled conservatives” will demand voters “unite” behind the candidate they select and then threaten to blame Trump supporters if Hillary becomes the next president because they sat out the election (as hypocritical pro-Cruz “conservatives” threatened).

If any such delegate notifies the secretary of his or her intent to cast a vote of conscience, whether personal or religious, each such delegate shall be unbound and unconstrained by these rules on any given vote, including the first ballot for the selection of the president of the United States, without the risk of challenge, sanction or retribution by the Republican National Committee.
— Colorado delegate Kendal Unruh letter to RNC Rules Committee 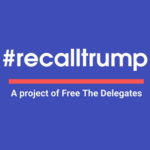 After the Republican National Convention, Trump destroyed his credibility and cannot win the Presidency. It’s time Trump lives up to his word, resign the nomination, and allow the RNC to replace him under Rule 9 of National Party Rules.

Like the ad? Help keep this ad running: http://freethedelegates.com/contribute

DISCLAIMER: Free the Delegates is a Super PAC dedicated to defeating Hillary by blocking and reversing Donald Trump’s political ascent. Our focus is on using unconventional and cost-effective tactics, as opposed to stereotypical high-cost, limited-yield methods with the objective of providing maximum donor value.

PAID FOR BY FREE THE DELEGATES.
NOT AUTHORIZED BY ANY CANDIDATE OR CANDIDATE’S COMMITTEE.

Hypocritical because these misguided “conservatives” demand Donald Trump keep his word while looking the other way when their messiah Ted Cruz broke his.