A ‘Black Nation’ No Sane American Wants Any Part Of

Adding to the list of demands made by black activists, comes the latest from the entitled morons in our society.

I’m going to be harsh because this is so offensive to common sensibilities.

Omowale wants “land ownership”. Ownership is traditionally acquired by purchasing a property, but of course, the black-entitled will “claim” five states. That’s also to assume those states actually want law-defying, arrogant, violent black brats roaming their streets, bitching about anything with little to offer in return. But we’ve also seen many instances since the birth of #blacklivesmatter where their participants will disrupt and/or crash any place or activity they weren’t invited.

We just need to start migrating back to those states and taking control of the economics in those states. If black people move in, most definitely white people will move out. So it’s not a hard process for us to have our own country within a country.

It would be very interesting to see just who’d voluntarily migrate into the claimed states and who would be publicly called out for not moving there. After all, do you see any black entertainers moving into an area where security would be provided by those who assume anything is theirs for the taking? Do you really see Jay-Z and Beyoncé buying property and leaving anything of value behind when they went to work outside of the Black Nation?

And as far as white people moving out, that kind of makes a statement to all those stupid, white-guilt liberals who participated in the #blacklivesmatter protests. They’re laughed at behind their backs and are too stupid to realize how their numbers legitimize a movement that would probably have received deserved minor attention.

As far as a “country within a country”, let’s hope they thought this through because in order to be a country, there needs to be a serious ability to self sustain. In watching the angry black women at the forefront of almost every #blacklivesmatter protest, just what do you think they can create that anyone would want to buy?

Over the last few decades, aside from gansta’ clothing lines, just what have black people created of value that anyone wants? Blacks certainly don’t create music of value anymore, that is if you consider talking shit over “beats” music. Blacks don’t create prose of any value and since the disruptors are purging classic literature from the curriculum, there’s no foundation for those who risk “acting white” to be educated to a marketable level.

Blacks don’t invent anything of value. Name one meaningful invention by someone with an African studies major. Black misbehavior is excused just like an owner excuses a pet who pees on the carpet. It’s assumed the pet doesn’t know any better and since liberals recognize no ability for blacks to discern right from wrong, foolishness is considered the excusable norm making all blacks (thank the media) look like undisciplined animals.

As I wrote back in 2002, the reparations scheme is a loser from Day One. Who will pay for it? Will halfrican Americans be expected to pay a portion while receiving a portion, meaning they get nothing? And how much will be given to each black person, because we all know what will happen once that payment runs out?

We’ve also seen over the decades just how competent blacks are at running government.

The People’s New Black Panther Party believes they can do better. What do you think the Vegas odds of them putting together a meaningful government structure and functioning economy would be?

We want to control the politics in our community. If a politician is not bringing anything to the table for the betterment of that community, we are not going to vote for these particular people. And we most definitely want to control the education. What our people are learning in what we call the public fool system, not school system, where they are teaching and misrepresenting the true history of the black man here in the United States.

If you have faith in a bunch of black activists who believe it’s their right to organize public protests and occupy property (private or public) or walk in the oncoming lanes of city streets without permits, impose themselves on your favorite eatery, study hall, or any event they don’t condone.

Given the chumps black people have been, continually voting to reelect corrupt black Democrats who’ve issued empty campaign promises while enriching themselves, how do the People’s Black Panther Party plan on holding politicians accountable? Maybe some protests in front of their homes, violence; they’ll need to try something different and effective, considering they’ll still be dealing with Democrats.

Let the shameless, opportunistic pandering to the willfully ignorant begin…. 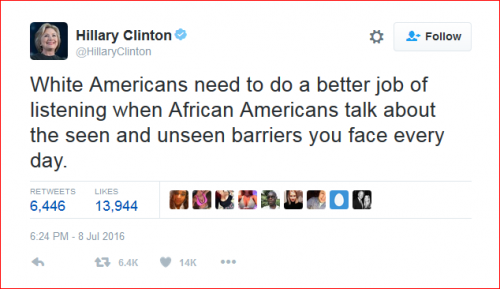 And good luck with wrenching control of the “public fool” system from the unions and for those crazies who gave blacks Kwanzaa to teach the true history of the black man here in the United States. Then again, with no consistent federal money to tap into, teachers may be the first professionals to abandon the Black Nation and their children. The police and other first-responders will have packed up long before that.

But at least blacks will still have basketball. No professional teams but vacant lots and playgrounds to dream on.

The racist liberals in Hollywood who’ve thrown everything black in our faces once they discovered there was actually a black man they’d invite to their homes (Obama) will quickly ignore those they had to tolerate, and that will be a good thing seeing how denigrating their representations of blacks continue to be.

Should the People’s Black Panther Party be given their own states (which will never happen no matter how many hissy fits or acts of violence they commit), it will be a place of constant bitching and moaning and it will only be a matter of time before their hands will be out, demanding they be supported because they will lack everything necessary to survive.