WTF? Springsteen on Trump and His Supporters

In yet another example of our nation’s privileged looking down with contempt on those who had the stupidity not to listen to them and vote the way they so authorized, Bruce Springsteen took the long approach at describing people who he can no longer relate to on a podcast few have heard of.

Springsteen let those who’ve spent their hard earned dollars on his many albums know what he thought of their judgment.

I’ve felt disgust before, but never the kind of fear that you feel now. It’s as simple as the fear of, is someone simply competent enough to do this particular job? Do they simply have the pure competence to be put in the position of such responsibility? 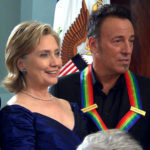 Many of us would like to be in a position where we could be paid handsomely for our art and wisdom.

If you’ve struggled for the past 30 or 40 years… and somebody comes along and offers you something else, particularly after you feel you’ve been failed by the two parties, it’s a compelling choice.

Bruce Springsteen is either politically naive or he’s a liar because it could be argued that both parties didn’t fail us. All he has to do is look at the damage Democrat policies have wrought on the whole nation, as evidenced by all those red counties and Republican governorships. The people clearly have more faith in one party than the other. Just a party he doesn’t ascribe to.

It appears only a very few have the humility to appreciate the blessing they have and show it to those who ultimately made it possible and Bruce Springsteen is not one of them.