Who Leaked a ‘Top Secret’ Intelligence Report to NBC News? 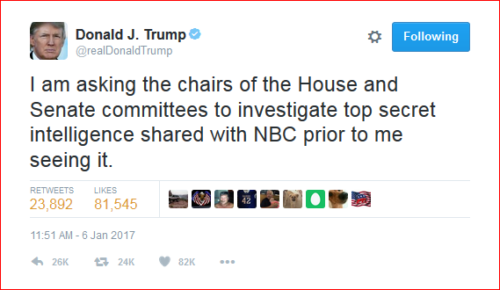 Those of us who’ve served in close proximity to Top Secret information knows the rules, precautions required as to its handling, and the severe ramifications for even an innocent mistake.

Whoever knowingly and willfully communicates, furnishes, transmits, or otherwise makes available to an unauthorized person, or publishes, or uses in any manner prejudicial to the safety or interest of the United States or for the benefit of any foreign government to the detriment of the United States any classified information — shall be fined under this title or imprisoned not more than ten years, or both.
— 18 U.S. Code § 798 – Disclosure of classified information

What’s unfortunate is the proof of how politicized our intelligence community must be when supposedly “top secret” materials are so purposefully leaked to friendly media with regards to supposed foreign intelligence agencies leaking information that is claimed to have swayed a presidential election. What’s also very telling is how immune from said ramifications NBC News and other liberal media outlets apparently feel they are when disseminating Democrat-friendly Top Secret information to the general public.

Government personnel leaking information to preferred media outlets is a practice that’s been going on in Washington, D.C. for decades and continues unabated.

But let’s not forget there was a time when the Obama administration threatened to come down hard on anyone leaking classified information to the media inconvenient to them.

HuffPo: Obama Official Warns That ‘Anyone Who Leaks Has To Pay The Price’

Whomever is leaking Top Secret information to the media is probably a partisan and we all know there are plenty of those “ends justify the means” types in the federal government who have no problem making their preferences known.

But this also calls into question anything the intelligence community distributes to the American people via the media because if some are willing to break the law to see a political end, then believing the integrity of the contents released should understandably be a tough call.