Ageism is a cyclical phenomenon. Stable employers release their older employees in favor of younger workers who are cheaper and whom they believe can be trained to be efficient. After a period of unexcused absences, shoddy work, and lackadaisical attitudes, experienced older workers become in-demand to stabilize the work environment.

At this time, millennials are slowly taking over the media landscape and we get Ben Jacobs-types, rudely interrupting the prearranged interviews of competing news outlets, editors missing typos, the obscene acceptance of amateur vertical video for national news channels, and now we have Colleen Campbell….

No wonder why everyone wants to blow your fucking heads off.
— Colleen Campbell to Philadelphia police officer 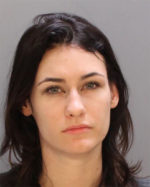 When it comes to almost any millennial it’s all about them, their assumption that everyone is dumber than them, long before ultimately taking responsibility for the misbehavior.

When I came home, I called my producer to talk about why I was absent. I didn’t realize a video was out. I found out about it later, because HR called me and said I was being terminated. They said there’s a video. I said, “What video?”

That’s not me or how I talk or act or anything at all.

That night, yes it was.

I don’t know what to do. I feel ruined and embarrassed for me and my family.

I feel awful. That’s not me or how I speak or how I talk or how I was raised. I had to delete all my social media, because I’m getting threats.

I wanna apologize to the officer. I don’t remember the whole altercation at all. I remember feeling attacked. I would never talk like that. It was like watching a whole different me.
— Q&A: Colleen Campbell, Philly.com, 6/6/17

And it didn’t take long for Campbell to make herself the victim.

Colleen Campbell, 28, said she’s “ashamed and embarrassed” by the viral video showing her expletive-filled tirade outside Helium last Sunday. She lost her job at PHL 17 after they got wind of the clip — which had been viewed on Facebook more than 3 million times by Wednesday morning — but now she says she’s the one being targeted.

“From the time the video was made public, Ms. Campbell has been the recipient of thousands of lewd and threatening phone calls, texts, messages, and emails ranging from angry, profane, and defamatory insults to deeply disturbing sexual and violent threats,” read a statement to The Post from a Campbell family spokesman, attorney Wayne Pollock. “Ms. Campbell and her family are still sorting out the events of that night. Their highest priority is the health and well-being of Ms. Campbell.”
— New York Post, 6/7/17 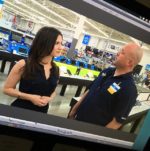 Have you noticed that those who claim to receive any number of threats NEVER produce them for public scrutiny or just plain proof that what we’re being told is not another take-my-word-for-it. A local news reporter would know all about those schemes to create public sympathy, especially for a poor helpless “girl”.

According to a police statement about the incident, shortly after the calm, cool, and collected cop who responded to the scene led her away in cuffs and the video stopped, Campbell, a recent Temple University graduate, allegedly assaulted him. Police say that she kicked him repeatedly and also kicked the doors and windows of a police car.
— Philly.com, 6/6/17

And we should be cautious when it comes to her honesty and acceptance of personal responsibility….

Campbell initially claimed to have had only one drink prior to the incident, but later admitted to having a total of five — including two shots an hour before the show and some while bartending earlier in the evening.
— New York Post, 6/7/17 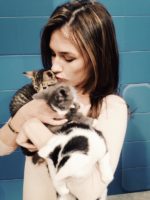 There are many great young people out there we’d hire in a heartbeat if we could, however there are way too many (especially in the media) who are spoiled, entitled, narcissistic brats who are all too ready to throw that “Do you know who I am?” in our face. The upside is that many aren’t impressed and even more are patiently awaiting the future job openings that are sure to come.

America is also known as the Land of Second Chances. That normally occurs after an appropriate amount of time and sincere contrition from an offender. Any attempt at a fresh start can be stalled when said offender attempts to make their inconvenient, problematic past go away by any means necessary….

On March 5, 2019, we received the following email from YouTube: 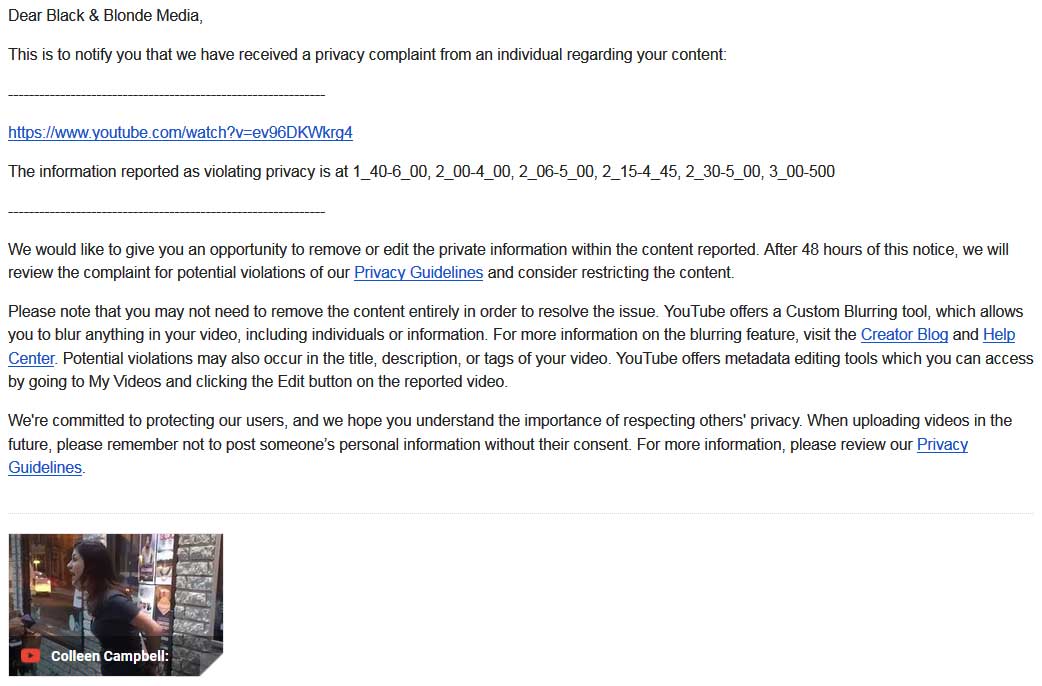 “The video we created was a mashup of a publicly available news reports, unedited and publicly available social media content still easily found online. If there is a particular reason why our video is being singled out, it would be helpful to know and it would be unfortunate if ours was being selectively targeted while others are not. We have not slandered anyone in question.”

YouTube contacted us back and backed us on the video.

It’s clear is yet another illustration of how easy it is for the very media types who relish in broadcasting public colonoscopies of their chosen targets while going to extraordinary lengths to keep their own inconvenient pasts as invisible as possible. 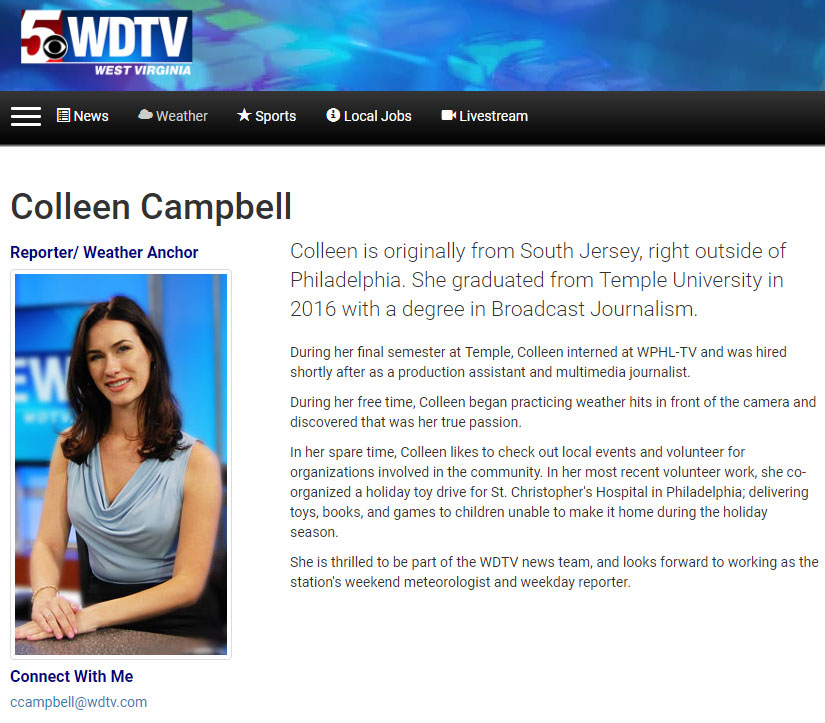 Colleen Campbell appears to have moved on, used her “free time” well and learned how to be a “weather anchor”!

The next time you watch your local news, appreciate the fact it takes little or no experience and/or formal education in meteorology to give weather reports which may also explain why so many get it so wrong, so often. 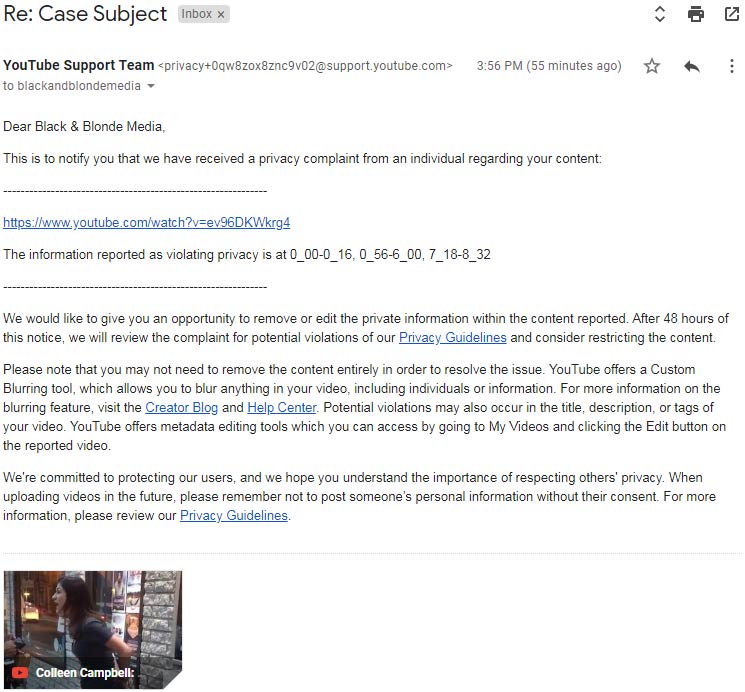 AGAIN, the video is NOT violation of her privacy. None of her personal information, aside from her widely published name and image as she IS a public figure, were revealed by us as we don’t have (or want) her personal information. Campbell never left a comment on this post asking us to remove it; she’s only tried now on two occasions to get us in trouble with YouTube. Video of this incident can still be found on YouTube, Facebook, as well as simple online searches. It’s not like we’re the ONLY online entity to publish her behavior on a public street.

What we have here is a clear example of the arrogance of those in the journalism profession. Had Colleen Campbell been outside the Helium nightclub with a camera crew and witnessed another woman exhibiting the same bad behavior, she would be the first to run that story on her station, follow the woman from the police station to her home, and give followups. But when those is the journalism class are busted, they’re the first to demand special treatment and purge offenses that could harm THEIR careers.

In the media business, jerks always seem to land a new gig.