Birds of a feather….

Less than a week after PHL17 reporter Colleen Campbell was fired for going off on a comedy club employee and Philadelphia police officer, laid-off ESPN reporter and verbal abuser Britt McHenry came to Campbell’s defense… sort of.

This is just a post for my friends, but if you’re sharing the video of the Philadelphia reporter, take a second look at yourself. I’ve been in a situation where a video was put out for the sole purpose of trying to ruin my career. In my case, the tape was edited and used as extortion for money. I had serious long-term health effects from the cyber shaming and bullying. This woman was out of line, yes. But what does it say about our culture when we gleefully film, share and consume the take downs of someone’s successful life and career? No one is perfect. I’ve seen every one of my friends make mistakes, and I’ve made a ton of them. I hope nobody I care about has to go through that shame publicly.
— Britt McHenry, deleted Facebook post

Why is it these stupid narcissists never take a moment to think before they post things they quickly have to delete? And this need for these people to find a way to make an incident all about them. Let us not forget who and what Britt McHenry was and is.

While McHenry was not arrested for her actions in 2015, she clearly hasn’t learned anything about humility, tried to play the victim, and was given the T&A pass, at least for awhile.

ESPN reportedly wanted to fire McHenry, but settled on a one-week suspension after she apologized on Twitter for her “hurtful actions” and asked for a second chance amid a torrent of vulgar and sexist comments directed at her on social media. Those angry comments apparently had a direct effect on McHenry, who told Marie Claire that she would stay up late at night reading comments about the incident on blogs that blasted her for being a “bleach-blond bubblehead” and “a sorry excuse for a human being.”

Eventually, she said, the stress become so intense it led to her vision becoming blurry and caused her right eye to grow cloudy.

“I went to a retinal specialist, who diagnosed me with CSR, a condition in which vision is impaired, often due to trauma or extreme stress,” McHenry said, as told by Abigail Pesta.
— Philly.com, 12/13/16

Aw, the hurt feelings. They have no problems letting everyone know how they felt but never considered the feeling of others when they were issuing their entitled, superior tirades on others they consider far beneath them. 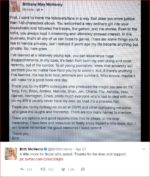 The poetic justice? McHenry was one of the recent boatload of layoffs at ESPN. Now while we don’t wish unemployment on anyone, there are clearly those who have no appreciation of the jobs they do have and are also too immature to function in the highest echelons of their profession. 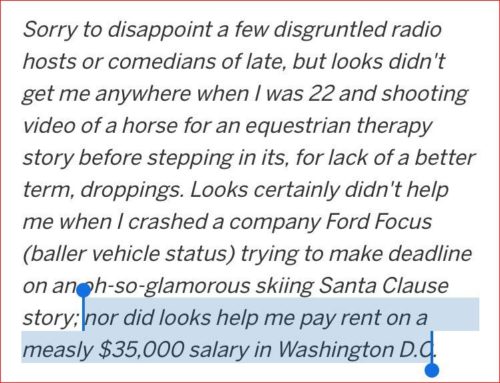 But of course there are readily-exploited attributes that give some people multiple chances and it won’t be long before we see Britt McHenry and Colleen Campbell on our televisions again because media standards and practices are that low.

… as Fox News never met a blonde they wouldn’t give a chance.

Meet Britt McHenry, the Fox News Star for Millennials
At another time, the move from sports reporter to political pundit might have seemed less natural. But McHenry’s unemployment, in 2017, coincided with the moment America’s favorite pastimes were all careening toward the political. There was Colin Kaepernick kneeling for the National Anthem. Superstars like Steph Curry were refusing to visit the White House. And, crucially, the President was sniping back.

McHenry’s sports fluency suddenly had currency in right-wing politics. She started pitching columns to Ben Domenech, publisher of the Federalist. Soon she was getting booked on Fox & Friends. When she got her first hit on Tucker Carlson Tonight, she called her mom. “It was life telling me: Yes, this is the direction you want to go,” McHenry says.

This March she started hosting Like It or Not, an evening talk show about politics and pop culture, on Washington’s Fox affiliate. Finley, the Fox News senior VP, saw the show. There was no “aha moment,” he says, just example after example of McHenry “getting people talking. On a fundamental level, that’s what it was. We saw it with the segments she was doing on Fox News, on her social media, columns she was writing for us.” Only three weeks into Like It or Not’s run, he phoned with a national offer. (She’s now working on both channels.)
— The Washingtonian, 1/13/19

When most people have bad social media moments, depending on the infraction, they lose jobs, relationships and their employment future is almost totally in peril. They have to live with the ramifications of their actions.

Members of the media expect, and often receive a pass because they truly believe they are special than the rest of us.