With all the “wage disparity” supposedly going on in the United States, you’d think a progressive leader could appreciate fair wages for an honest day’s work and compensate his independent contractors accordingly. 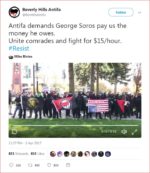 The Beverly Hills chapter of #Antifa appears to have a grievance with George Soros and made a public plea to get paid for services rendered for whatever he may have tasked them with doing….

For a media that’s consistently covered for liberals who’ve destroyed public and private property during their protests by calling them “mostly peaceful” or “counterprotesters”, the proof displayed here that George Soros is at least one of the money men behind the violent confrontations nationwide is something they will try to ignore.

That is, if #Antifa will let them.

What’s really sad is that for all the damage and injuries they’ve caused nationwide, it’s only worth $15 an hour.