Given the uncharacteristic way the New England Patriots’ regular season ended, the bloviators calling the future, first ballot Hall of Fame quarterback “washed up”, and the possibility that we all may soon be witnessing the true end of an era, all that should be rightfully said is “Thank you, Tom Brady”.

Sadly, there are too many Patriots fans who only jumped on the bandwagon shortly after the team became the new “it” on January 19, 2002. It was that snowy night in Foxborough where that infamous “tuck call” became part of New England legend. A young Tom Brady led his team to a game tying field goal by Adam Vinatieri, and after more than half of the overtime, another field goal to defeat the Oakland Raiders. The Patriots would eventually win their first Super Bowl.

Fair weather, faux Patriots fans have become spoiled, whiny sportswriters have been reduced to petty nitpickers, all because the New England Patriots (led by Tom Brady) have become consistent winners since that cold January night. But what may come as a surprise to the ignorant, things weren’t always so rosy.

Prior to the Tom Brady era, the team was (more times than not) affectionately known as the “Patsies” because they were consistently that bad and couldn’t fill Gillette Stadium; thus most home games wouldn’t be aired on local television. It actually became a treat to watch a Patriots road game and witness them finding startling new ways to lose.

Some of us initially became Patriots fans at a time when Patriots quarterbacks were more adept at blowing games than winning. Before Coach Bill Parcells changed the consistently pitiful football culture in New England, we endured the likes of Jim Plunkett (who ironically went on to win a Super Bowl with Oakland and Los Angeles AFTER leaving the Patriots); Tony Eason who led an NFL-leading power rushing juggernaut to Super Bowl XX against the ’85 Bears and was told to… pass? We all know how humiliatingly that worked out. Steve Grogan made things more interesting even though he also made facepalms a weekly practice along with his successor Drew Bledsoe who participated in the Super Bowl XXX blowout loss most Patriots fans have long since happily forgotten. While Doug Flutie was the local legend and Vinnie Testaverde was plucked from that all-that-was-available stack, there were also a few in the bum category (including the equally mediocre backups) not worth mentioning.

It wasn’t until Bledsoe was nearly killed by Jets’ Mo Lewis and subsequently lost his job to a hungry-and-ready Tom Brady, did the Patriots’ tide finally take that turn. A couple years into the Bill Belichick era and a motivated young quarterback changed how football was viewed in New England and around the nation. The team finally had a quarterback who knew how to win with the support of a head coach in Bill Belichick who knew how to get the best out of his players, year-in year-out.

But was it Tom Brady or Belichick’s coaching? We’ll leave that discussion for another day as cases could be made.

In September of 2008, Tom Brady went down with a torn ACL during the season opener in Kansas City and that talk of doom-and-gloom commenced, given the ugly reality of backup Matt Cassel being handed the monumental task of taking the Brady-less Patriots to even a .500 season.

Under the tutorial guidance of Coach Belichick, Cassel and the Patriots flew to an 11-5 season, making them the only team in NFL history to not make the playoffs with eleven wins (only because the Baltimore Ravens had a better conference record).

In the subsequent years after his return, Tom Brady led the Patriots to five more Super Bowl appearances, winning three. Unlike most teams where “rebuilding” can take years (if not decades), New England normally gels their new personnel within the preseason through Week 4. After that, the Patriots freight train gathers steam and has reached the AFC Conference Championship game every year since 2012. This all, despite the noise from arrogant sports blabbermouths who mostly never played the game.

It’s unclear what Tom Brady’s plans are after the season is over, however that metastasizes itself. Will he re-up again with the Patriots? Much has been the mockery that Brady’s not the best of quarterbacks because he’s seldom been near the top of that conversation when it come to the NFL’s highest paid quarterbacks. This year, he ranked a shocking #18. Granted, it didn’t hurt having the lifestyle supplemented by his supermodel wife’s take home pay.

But there’s another reason (unrelated to performance) Brady’s paid disproportionately low: he’s restructured his contract so other needed pieces of the team puzzle could be acquired. How many of the higher paid have personally invested in their own team on numerous occasions, putting the team first?

Not many, if any, and that’s just one more thing that makes Tom Brady special.

So, what if the football prognosticators are correct and Tom Brady opts out of New England? Not sure if he’d be ready to take lumps in Los Angeles just to be a showcase for the Chargers’ new stadium. Maybe modeling or acting; who knows? But does that mean the New England Patriots will join the majority of the mediocrity that is the NFL? Don’t be so sure.

Belichick has gone 13-6 (.684) in 19 games without Brady at quarterback for the Patriots. To put that in context, no other team in the league besides Belichick’s Patriots has posted a winning percentage higher than .684 since Belichick and Brady joined forces in 2000. Nobody would argue that Belichick doesn’t need his Hall of Fame quarterback, but the Patriots have been extremely good even without Brady at the helm.
— ESPN, 1/29/20

This season was a very poor indicator of Brady’ abilities. Those who’ve been paying attention saw one thing this year that’s been relatively absent during the Brady era: off-the-field drama. Yes, the loss of tight end Rob Gronkowski was obviously huge, but the Patriots have won Super Bowls without key players. The very uncharacteristic personal episodics that infected the Patriots organization via receivers Josh Gordon and Antonio Brown left Brady to play out the last half the season without weapons that had this team anointed Super Bowl champions before their unceremonious exits from New England.

Despite the loss of three of Brady’s weapons (and the NFL’s best defense didn’t hurt), the Patriots finished the season as the AFC East Champions for the 11th straight year and the conference #3 seed. Not bad.

As long as there is a Bill Belichick, the next QB should be just as consistently prolific (see Cassel and even Jacoby Brissett while a Patriot). Belichick gives quarterbacks the structure to hone their skills in the shortest time possible. The Patriots will be fine. Despite popular ignorance, they didn’t come into existence in 2001 and their dominance as a franchise won’t end in 2020. Whenever the Brady era in New England ends, IF it does this year or is just more media speculation-interruptus, we had a quarterback that made us proud to be Patriots fans. 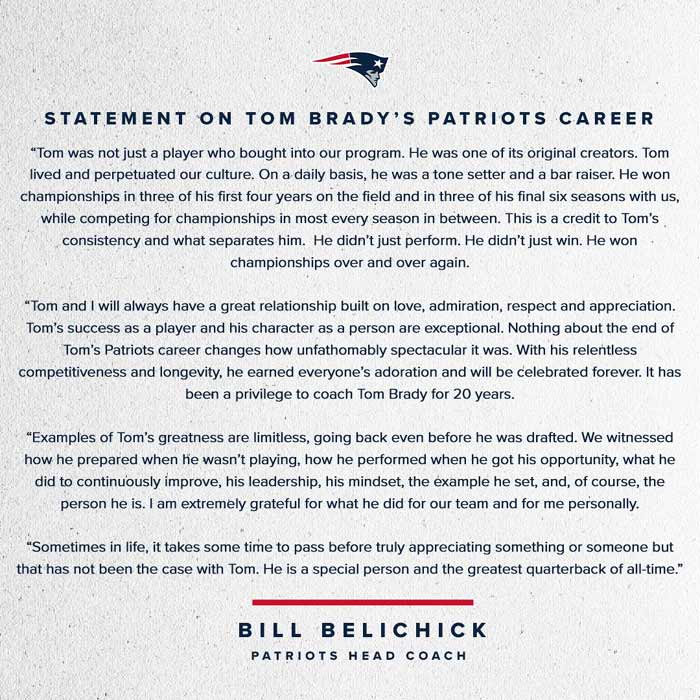 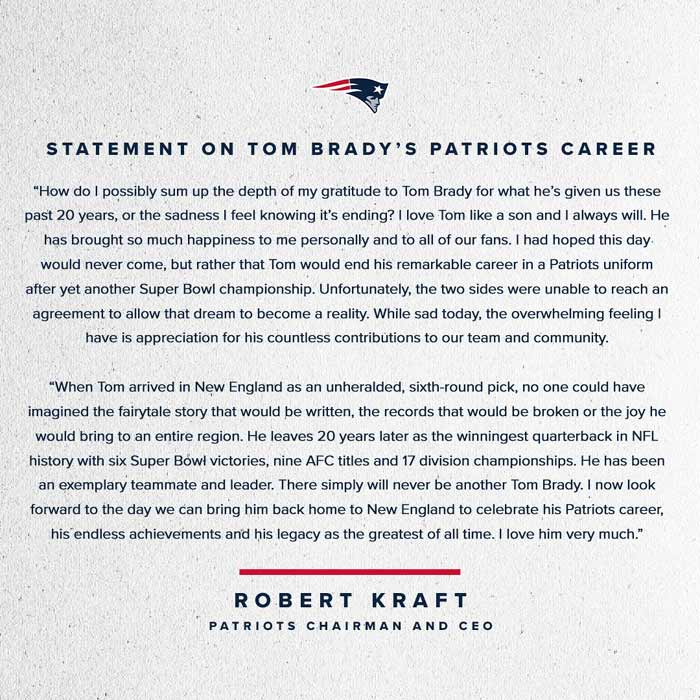