For more than a year, The View’s Joy Behar has been on a one-woman hate crusade against Donald Trump and Republicans longer than that. When the Harvey Weinstein sexual abuse avalanche began, she made a point of making this a “men” issue.

The panel on ABC’s “The View” reacted with anger and disappointment to news on Thursday that a Los Angeles radio personality accused Sen. Al Franken (D-MN) of groping her and forcibly kissing her on a USO trip in 2006.

Either Joy Behar has an acute case of Alzheimer’s or she’s been lying to America knowing she’s been prone to put her hands where they don’t belong without consent. 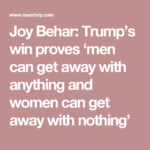 Of course, Behar will NOT address her past transgressions unless pressured into an insincere, public apology by her evil male bosses at ABC. If liberal patterns hold true, she’ll claim her groping was NOT of sexist intent.

It was comedy. Just you wait.

One of our most beloved comedians, 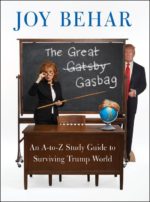 The brilliantly witty and outspoken star of The View, hits the most unpopular President ever elected where it hurts—and makes us laugh and cheer—in this hilarious alphabetical guide to everything that’s wrong with the “Orange One,” Donald Trump.

Put down the knife, lock away the gun, lay aside the noose, Joy Behar is here to save you from suicide as she hot walks you through the next four years (two if we are lucky, less if liberal dreams come true). Besides despair, the sane response to the insanity in the White House is laughter. On her hit ABC daytime show The View, Joy has been blunt in her condemnation of the comb over-in-chief, and her words have electrified and inspired millions in the resistance for whom #notmypresident has become a rallying cry. The Great Gasbag is Joy’s answer to the hell that is the Trump Orange House.
— Harper Collins, About the Book 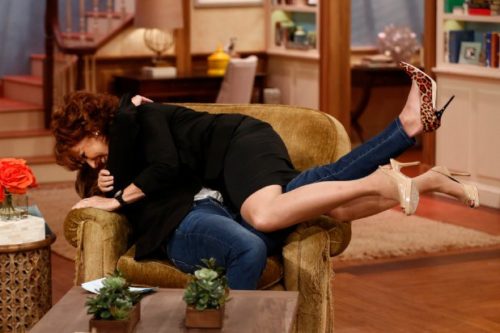 Her new book would be more appropriate if she weren’t in front of a blackboard but looking into a mirror.