Sens. Gillibrand and Warren’s #MeToo Judgment in the Liberal Gutter

From what could only appear as a coordinated attack to coincide with the presser to promote a new “film” about the sexual abuse accusers of President Trump and the Alabama senatorial election, New York Senator Kirsten Gillibrand threw a lame left hook. 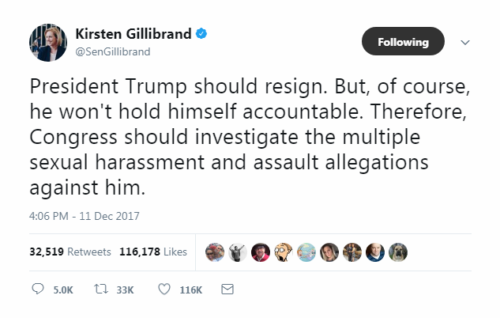 The opportunistic and timely #MeToo movement was ramped up to new hysterics when President Trump responded to Gillibrand.

Sen. Kirsten Gillibrand (D-N.Y.), who has called on Trump to resign over allegations of sexual misconduct, was the subject of a Trump tweet on Tuesday in which he called her a “lightweight” who “would do anything” for campaign contributions — a comment some have interpreted as sexual.

“Well certainly that was how I and many people read it,” Gillibrand said on NBC’s “Today.” “It was certainly just a sexist smear intended to silence me.“
— The Hill, 12/13/17

It appears mostly liberal Democrats are the ones who interpreted a commonly used phrase as sexist.

White House press secretary Sarah Huckabee Sanders on Tuesday pushed back on the claims that the language was a sexual reference, telling those who took it as such to that their minds were “in the gutter.”

But this isn’t the first time Senator Gillibrand has exploited the sexual abuse card and then fleeing when details don’t fit her desired political conclusion….

To add to the confusion, Massachusetts Senator Elizabeth Warren added to the conversation in a way that was also open to gutter interpretation. 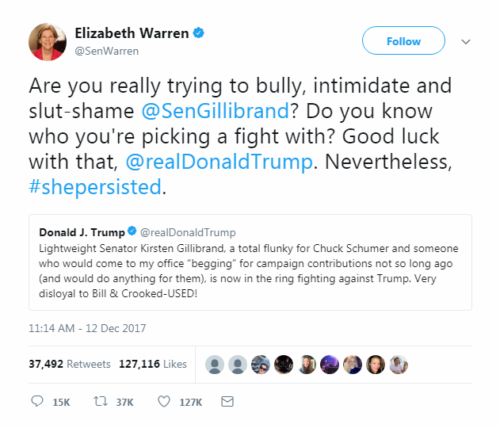 In her attempt to utilize social justice terminology, did Senator Elizabeth Warren imply Senator Kirsten Gillibrand is a slut?

Slut-Shame
When you shame someone for the way they act sexually.

“Okay??? We don’t Slut-Shame. Who cares how many people she has slept with
— Urban Dictionary

Politicians can slander anyone they want with impunity under

the Constitution. Senator Gillibrand has done so on several occasions, she will persist in doing so in the future and is too high and mighty to admit when she’s wrong.

Is this what the latest iteration of the women’s movement has in store for the United States?

As is usually the case, Democrats blatantly accuse others while knowing what’s been shoved in back of their own closets.

“Congress has a sexual harassment problem — and isn’t taking it seriously,” Gillibrand wrote in Fortune magazine. “If we can’t clean up our own act, how can anyone expect Congress to do the right thing for victims and survivors in the rest of the country? Congress has to do better. I believe that elected officials should be held to the highest ethical standard — not the lowest.”

You know what’s coming next….

Just a few months later, when a woman in her own office reported that a married male staffer was making repeated, unwanted and increasingly aggressive sexual advances toward her, Gillibrand did not do the right thing and fire him. Politico reported that “less than three weeks after reporting the alleged harassment and subsequently claiming that the man retaliated against her for doing so, the woman told chief of staff Jess Fassler that she was resigning because of the office’s handling of the matter.”

Gillibrand’s office defended her inaction, saying in a statement that the senator’s office had conducted a “full and thorough investigation” that included “multiple interviews with relevant current employees who could potentially corroborate the claims” but did not find cause to fire the male staffer.
— Boston Herald, 3/14/19

And the timing couldn’t be worse.

Like a small matter of sexual harassment would stop her.