Let’s preface this by stating the obvious. Hillary Clinton was supposed to become President of the United States, appoint friendlies, and NONE of what we’ll soon be finding out was to have seen the light of day. What’s screwed all of this up was the election of Donald J. Trump and that became the impetus for what we now know as the #DeepState #resistance.

Not as much as opposition to Trump but the threat he represented because Democrats no longer were in control of concealing possible illegal activity by her supporters embedded in the federal government. We may find the “Russian collusion” accusation was nothing but a desperation hail-Mary to damage President Trump and keep possible illegal activity from the public forever.

On the eve of the release of the Foreign Intelligence Surveillance Court “memo” on possible abuses against the Trump campaign, we’ve been told repeated by Democrats, their media, and high-ranking law enforcement officials that elements contained therein could be “damaging to national security” if revealed to the general public.

President Trump plans to allow the release of a controversial memo detailing alleged surveillance abuses at the FBI, according to a senior administration official. The official said Trump will inform Congress of his decision “probably tomorrow,” adding the president did not have any national security objections to releasing it and would likely not request that any material be redacted.
— The Hill, 2/1/18

We’ve all read about the mental gymnastics the Democrats are performing to keep this memorandum from public scrutiny, not to mention the objections from high-ranking FBI and DOJ officials. But if the president doesn’t deem its contents potentially damaging to national security, just who’s security could at risk when the public gets an opportunity to digest four pages?

The Department of Justice and Federal Bureau of Investigation has enormous power over we mere private citizens. They can decide to investigate us whenever they deem they have “probable cause”, and subsequently force any citizen to have to spend up to hundreds of dollars to keep ourselves out of prison. They can bash in doors, confiscate our personal property, potentially ruin anyone’s professional reputation, and force you to plea to a lesser charge should they really be after a bigger fish.

The problem now is some of these law enforcement elites are not ready to face the same music gleefully inflicted on the public. Many live in very nice homes in very nice neighborhoods (in and around the Washington, D.C. area), drive very nice personal cars, send their children to exclusive private schools and elite colleges, and are comfortable knowing they can rely on a generous pension when they decide to retire from public service and leapfrog into a safe think tank or university gig.

All of this could be at risk for some of these federal government lifers and to them, THAT is the “security risk”: THEIR personal security and freedom.

More than a thousand applications for electronic surveillance, all signed by the attorney general, are submitted each year, and the vast majority are approved.
— ABC News, 3/4/17

We may just find out that officials and employees at the DOJ, FBI, the FISA Court, and maybe even Obama administration employees may have knowingly been engaged in very illegal activity to rig a presidential election, remove a duly-elected president (by any means necessary), and could be cornered into pleaing for lesser punishment to rat out the fat-and-happies much higher up.

How high? It could be in the memo, that’s why this could indeed be a “security risk” and that’s why for some people, it’s a really big deal. 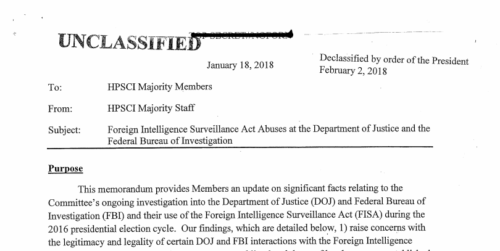 The court that approved surveillance of a former campaign adviser to President Trump was aware that some of the information underpinning the warrant request was paid for by a political entity, although the application did not specifically name the Democratic National Committee or the Hillary Clinton presidential campaign, according to two U.S. officials familiar with the matter.
— Washington Post, 2/2/18

And whaddaya know, the FISA court judge in question was an Obama appointee. Surprise, surprise….

Judge Rudolph Contreras was responsible for issuing the FISA Warrant to wiretap former Trump Campaign Foreign Policy Adviser Carter Page, according to two sources familiar with the material that underlies the Memo published by the House Intelligence Committee on Friday.

Contreres was appointed to the Foreign Intelligence Surveillance Court (FISC) by Barack Obama in the midst of the 2016 election, being sworn-in on May 19, 2016. Judge Contreras also oversaw the case in which Michael Flynn pled guilty to lying to the FBI. On December 7th Judge Contreras recused himself from the Michael Flynn Case.
— Offended America, 2/3/18