Being consistent can be a real inconvenience.

Anytime the left needs someone to interpret the delicate nuances of an incident in the black community for the world, the media puts out calls for their usual spokespersons: Jesse Jackson and/or Al Sharpton because we all know THEY speak for all of us. While we acknowledge the condescension and racism inherent in that kind of thinking, liberals are not alone.

It’s sad to note that because of decades of being called racists, too many white conservatives are quick to promote the newest shiny thing promoted on social media to prove themselves not, while failing to vet the possible motivations that inspired the shine. I’ve said many times, either here or during interviews, that the black community is the ONLY group in this nation that has superficially-recognized, unelected leaders and too many bleeding hearts that elevate them to that status.

I’ve also said many times that it won’t take a “leader” to bring the blacks out of the progressive prison of the mind. It will take that individual reckoning and subsequent decisions that will determine if a person wants to remain in the proven liberal pit of despair or choose another option and climb out to freedom.

Unfortunately, too many conservatives are no better than liberals in propping up those THEY believe best speak for us.

All it takes to get noticed is repeat something lifted from those who’ve truly suffered as a result of liberal retribution for leaving the “plantation” without authorization, and get elevated to “rock star” status. Many of the newly-elevated were chosen and are being actively promoted by those who see a promotional, thus monetary return for their own entities (nonprofits). For example, look at the conservative nonprofits that claim to be in support of black conservatives and you’ll find well-paid white conservatives running them and unpaid black conservatives being compensated with that “free publicity”. Of course, those white conservatives are the ones who choose who the spokespeople are, regardless of their dubious backgrounds.

Like too many online aggregators that find stories real media companies produce, rewrite them and claim to “break” news, these new authorized black conservative spokespersons regurgitate the profound statements of those who were disowned by family members, and in some cases lost livelihoods because they chose not to think as the liberal left demanded they do. These new “black conservative leaders” came from comfortable households and have the luxury of a social media platform to shout out their newfound words of wisdom for those they count on for mutual exploitation.

I do not observe Jackson, Sharpton, Cummings, Lewis, Skip Gates, Maya Angelou, John Lewis, Maxine Waters, Sheila Jackson-Lee, Don Lemon, Melissa Harris-Perry, Joy Reid or any of the other liberal blacks given a platform to speak with conviction on my behalf. I wasn’t given an opportunity to vote for any one them and their success, given their collective missions, has been a dismal failure if not damaging. They say what their massahs approve and they’ve been afforded comfortable lifestyles as compensation to meet a political end.

Black conservatives who’ve lost much because of their activism are too numerous to count but their messages have been successfully co-opted: Shelby Steele, Alan Keyes, Herman Cain, Frances Rice, Ward Connerly, Wayne Perriman, Alveda King, Jesse Lee Peterson, Mychal Massie, Roy and Niger Innis, Anita Moncrief, Lynn Swann, Allen West (and many more) and it’s embarrassing that bleeding heart and/or opportunist donor-dollar conservatives have now included Candace Owens (who was a Democrat until very recently and escaped the legendary ghetto of Stamford, Connecticut) and Kanye West in that respected category. 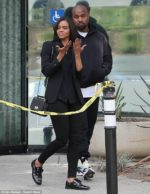 Those now being elevated to black conservative spokesperson status, if we’re to be intellectually consistent, and those elevating them for monetary gain are no different than those on the left.

It’s also clear these nouveau-activists can’t stomach what comes with being a sanctioned leader. 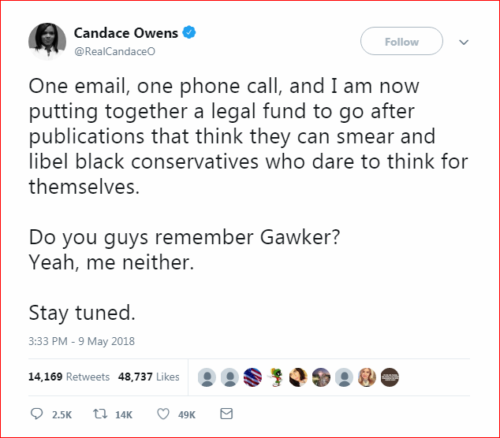 Silencing opposing views. Who does that?

Almost all of the black conservatives mentioned above suffered more than some social media tweaking and never once did it dawn on them to sue to deny the free speech of others, including racist hate speech from so-called progressives. Sad it never occurs to the easily-butt hurt that the easiest way to rid oneself of the Facebook and/or Twitter emotional torment blitzkrieg is turning off the fucking computer.

If we’re to believe that black people can think for themselves, then we don’t need the publicity-seeking telling black people what they should be thinking. If you can’t name an unelected “leader” for any other ethnic group in the United States, maybe there’s a damn good reason for this.

What shall we do with the Negro? I have had but one answer from the beginning. Do nothing with us! Your doing with us has already played the mischief with us. Do nothing with us! If the apples will not remain on the tree of their own strength, if they are wormeaten at the core, if they are early ripe and disposed to fall, let them fall! I am not for tying or fastening them on the tree in any way, except by nature’s plan, and if they will not stay there, let them fall. And if the Negro cannot stand on his own legs, let him fall also. All I ask is, give him a chance to stand on his own legs! Let him alone!
— Frederick Douglass

That is, unless you really do think black people can’t think for themselves….