Thanks to the culture created (most recently post-Weinstein), a woman can cheat on her husband and once caught, scream rape, play the victim and ruin a man’s already damaged life to save her own ass. 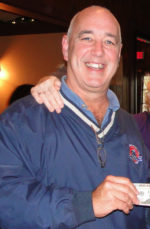 Four of the town’s five selectmen gathered Tuesday night and voted immediately to move their meeting behind closed doors in what’s known as “executive session,” which falls under an exception to the state’s open meeting law. After they returned to their public meeting about 15 minutes later, Clifford said the four selectmen had decided to hire attorney Regina Ryan of Discrimination and Harassment Solutions, LLC to look into the allegations.

What’s great about small communities is the insightful scuttlebutt within their neighborhoods. 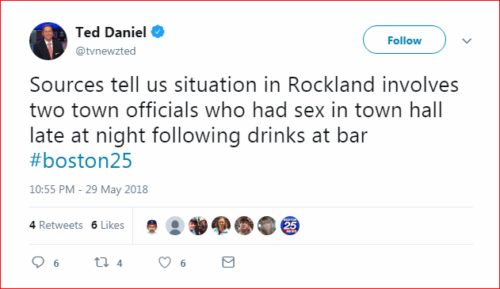 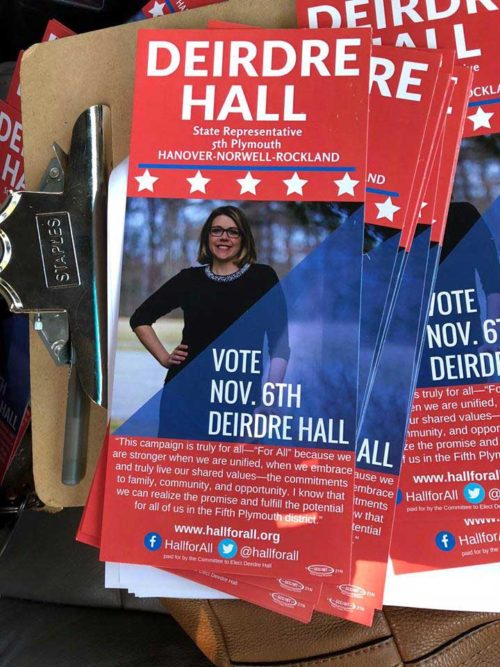 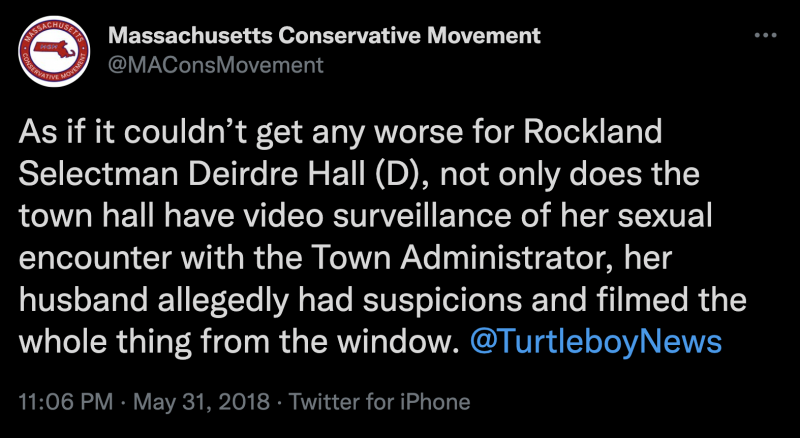 Funny how Deirdre Hall left that little detail out from her Democrat supporters…. 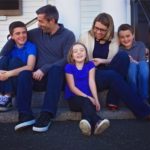 Last evening, at my request, the Rockland Board of Selectmen initiated an internal investigation involving an allegation of inappropriate behavior by the Town Administrator towards me. Soon after the incident, I reported this matter to two members of the Board of Selectmen. I am cooperating fully with this process and I hope to see a thorough and fair investigation by the Board.

I currently need to prioritize my needs and those of my family. We ask that you respect our privacy during this difficult time.
— Deirdre Hall (D), Candidate for State Representative 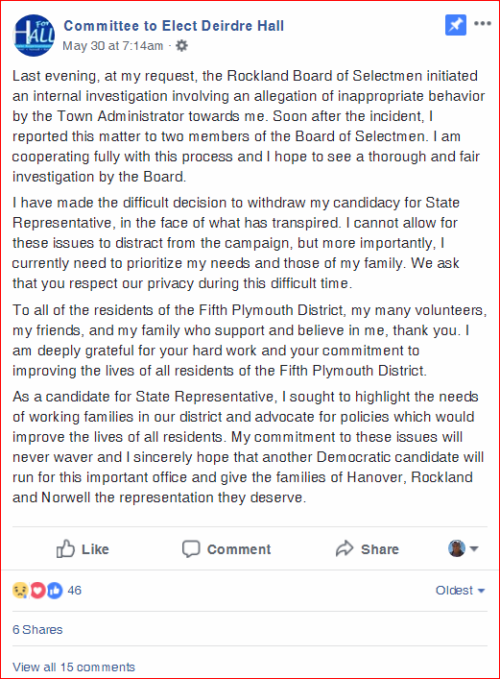 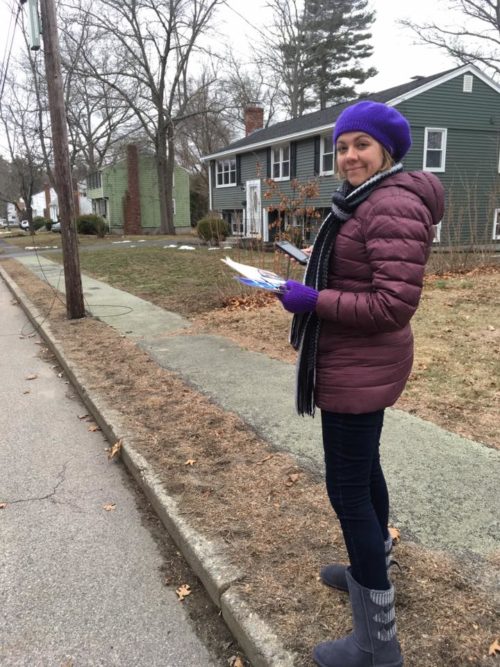 As she’s now implying “rape”, hopefully after hiring an attorney, the Rockland Board of Selectmen will call the cops and press filing-a-false-allegation charge against Hall. That is, IF they have the guts to do so.

Selectman Deirdre Hall has withdrawn her candidacy for state representative after asking the board to open an investigation into the behavior of Town Administrator Allan Chiocca. The board announced Tuesday that Chiocca has been placed on paid administrative leave and an independent investigator has been hired.
— The Enterprise, 5/31/18

Kinda’ makes you wonder what “Hall for All” implies because while she’s been caught this time, doesn’t mean it’s the first.

Rockland Selectman Hall takes leave during investigation
“Indeed I no longer feel that my children are comfortable or safe taking the school bus or participating in community activities,” she said. “This is a deeply disappointing consequence of my decision to stand up for myself in a situation where I was treated improperly.”

Hide behind the children…. IF she did nothing wrong, why is Dierdre Hall excusing herself from elected duties and leaving the town to tear itself apart?

Hall, a married mother, had initially claimed she was too intoxicated to have consensual sex with Chiocca, but the investigation found otherwise.

“Regina Ryan’s account showed that Mrs. Hall was really the aggressor and Mr. Chiocca was not,” said Larry Ryan, who is now Chairman of Rockland’s Board of Selectmen.
— Fox 25 Boston, 6/11/18

What’s even more disturbing is that, according to Fox 25’s report, the “spouses” of Hall and Kimball decided to go along and keep the affairs quiet so Democrat Dierdre Hall’s state representative campaign could go on unaffected.

Women have the power to not only destroy the careers of men but absolve themselves of any responsibility as to their initial consent-turned-assault.

The board released only a two-sentence statement from private investigator Regina Ryan that rejected Hall’s assertion that any sexual activity between her and Chiocca was non-consensual because she was intoxicated. “With respect to the allegation that Ms. Hall violated the town’s discriminatory harassment policy,” Ryan wrote, “I substantiate Mr. Chiocca’s allegation that on May 1-2, 2018, Ms. Hall used her position as a member of the Board of Selectmen, who was actively reviewing and would soon be voting on his request for a contract extension and salary increase, to pressure him into engaging in sexual activities with her.”
— Commonwealth Magazine, 7/12/18

This should make you question how many of those actresses in Hollywood who are piling on the Weinstein rape parade were indeed victims or willing participants who didn’t get the career boosts they expected as an ROI.

It appears the Rockland Selectboard was busier than the constituents were told.

Last week, a report by Discrimination and Harassment Solutions, LLC concluded that then-selectman Deirdre Hall used her position as selectman to pressure Chiocca into engaging in sexual acts. Though Hall was found to be at fault, town attorney John Clifford said last week that the investigation identified “other serious misconduct” by Town Administrator Alan Chiocca, which is what led to Tuesday’s disciplinary meeting.

The report also tied Selectman Edward Kimball to the investigation, saying he and Hall were also having an “intense physical and emotional affair” through March and April. The report says Kimball was “furious” to find out about the encounter between Chiocca and Hall, and that he demanded to be shown the surveillance footage without disclosing the nature of his interest.
— Patriot Ledger, 7/17/18

“Hall for All”… take a number! 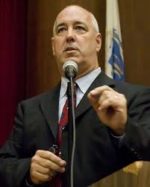 Allan Chiocca has been on administrative leave since May pending an investigation into “serious allegations” of sexual misconduct. Town officials in Rockland, Massachusetts, agreed Tuesday not to take disciplinary action against the town administrator after an investigation cleared him of sexual misconduct allegations, revealing that his accuser was actually the alleged aggressor.
— NBC 10 Boston, 7/17/18

Allan Chiocca isn’t really “cleared” here. Instead of engaging in sexual activity because he says he was being threatened, he could have reported it, a sting could’ve been set up so it wouldn’t end up being a “he said, she said” because we all know whose word is initially taken. Instead, Chiocca succumbed and he should never be allowed to be employed as a town administrator anywhere every again.

He initially rejected the idea of stepping down as Selectboard chair, was voted out of his chairmanship by his fellow colleagues but as a recall effort gained steam, sparing the potential damage to the ego was apparently was more important than doing right by the people, so…

A selectman targeted in a week-long recall effort has resigned his position. Edward Kimball, an eight-year member of the board, submitted his letter of resignation to the town clerk Tuesday morning.

An independent investigator was hired by the town in May to look into claims by Deirdre Hall that Town Administrator Alan Chiocca had acted inappropriately toward her during an after-hours meeting at town hall that was caught on video. The motion included an affidavit from Kimball, which said Hall approached him and said Chiocca engaged in inappropriate behavior with her.

Kimball’s affidavit implied his interest in the claim about Chiocca was purely professional, but the report says he was “furious” to learn of the encounter and asked IT Director Eric Hart to show him the security footage.
— The Enterprise, 7/31/18

With all the ensuing drama, we still have the false claim of “inappropriate behavior” we now know was instigated by Deirdre Hall, not to mention insidious family members who were able to look the other way for a variety of self-serving reasons.

Meanwhile, some politicians who believe they are entitled to the support of constituents don’t take rejection well. 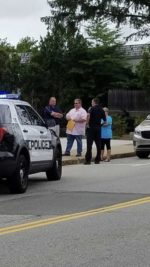 Police were called to Rockland Town Hall on Wednesday to respond to reports that Edward Kimball was arguing with residents who were collecting signatures to support the selectman’s recall.

Four police cruisers responded to town hall at about 4:45 p.m. Wednesday for reports of a “possible assault in progress,” according to the police log. The officers said there was no assault but that Kimball got into a verbal argument with someone standing outside with a group collecting petition signatures in an effort to force a recall election for the veteran selectman.

“My understanding is that some adults got into a heated argument which ended prior to our arrival,” Rockland police Lt. Nicholas Zeoli said in an email. “There were no charges filed.”
— Patriot Ledger, 7/26/18

With all due respect to the good local reporting of those at the Patriot Ledger and others covering this ongoing Greek tragedy, the ONLY reason why this hasn’t made national news is because we’re talking about foul Democrats and a media that covers for them.

There are many in the political class (including their spouses and children) who seem to believe the world cannot exist without them and even when some should hang their heads in shame and leave those they affect alone, these people come back with the full expectation of acceptance.

The husband of a Rockland selectman who resigned after investigators found she used her position to solicit sex from the town administrator is running to replace her in an upcoming special election.

Christopher Hall, husband of former Selectman Deidre Hall, is among four residents who have taken out nomination papers to run in the Nov. 6 election. Two seats are open because Deidre Hall and former Selectman Ed Kimball resigned in the aftermath of the scandal.
— Patriot Ledger, 8/23/18

Some of us would be laying low humiliated, even to the point of considering moving out of town and trying to make a fresh start where no one knew who we were.

Others want to be elected.