It must have sucked to be a Starbucks employee last week because, not only did you have to endure hours of being told how racist you may have been, but you were also lectured to by some of the most sanctimonious, pussified black people recently assembled. 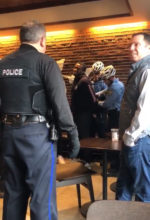 Starbucks recognizes the training “will not stop bias or solve racism,” a company spokesperson told TIME in an email. This training day, the company now says, is the first step of many to address these issues and engage its workforce. The May 29 training day at Starbucks will involve 175,000 employees at more than 8,000 stores around the country that will be closed for the afternoon. The program was “designed to address implicit bias, promote conscious inclusion, prevent discrimination and ensure everyone inside a Starbucks store feels safe and welcome,” according to the company. Starbucks sought the aid of former U.S. Attorney General Eric Holder, Anti-Defamation League CEO Jonathan Greenblatt and Sherrilyn Ifill, president and director-counsel of the NAACP Legal Defense and Education Fund, to develop the curriculum of the program.
— TIME, 5/30/18

Assuming YOU can select the “aid” representative of the black America is kinda’ racist, ain’t it Mr. Johnson?

While the Philadelphia Starbucks manager who called the cops on two black men has “mutually” chosen to leave the company, thanks to social media, the whole thing got blown up and everyone was tarnished with the racist label. That’s usually how it works. Unfortunately, only certain black people were selected for participation in the production of the Starbucks videos; those who’d leave out the racism the rest of us have to deal with: the racist perception that’s a result of black people acting badly, thus distributing the negativity we all have to live with on a daily basis.

Video 8:
Filmmaker Stanley Nelson’s documentary on the story of access to public spaces in America

To be played on Starbucks racial training “Guidebook”.
This independently created film by Stanley Nelson was underwritten by Starbucks with the intent of educating our partners about the history of access to public spaces for African-Americans. The film explores the impact of bias within public accommodations as well as the possibilities for a better future. The film is integrated into the curriculum and discussion materials that are shared with Starbucks partners (employees).

We added a little context to Stanley’s “documentary”.

I’m not condoning racist perceptions… but I understand.

I don’t particularly appreciate 99% of people who see me on the street assuming I’m a Democrat. It’s based on a numerical fact. I deal with those perceptions, as inaccurate as some may be. However, black people also do some very embarrassing things in public and if activists want to call the majority of law-abiding citizens racist for reacting understandably to what’s seen with our own eyes, so be it.

Whether we’re talking about the most progressive of college campuses or almost any place with a concentration of liberals, you’ll generally find racism, sexism, homophobia, and antisemitism yet they’re the ones to take it upon themselves to lecture the rest of us about the shortcomings they prominently perform.

In the case of their “training day”, Starbucks portrayed black people as whining victims, some of the men on the verge of tears, complaining of their daily grapples with insensitive white people while not ONCE condemning the black people whose very criminal behavior has justified the suspicions of store owners across the nation.

This is why we’ll continue to get our coffee at Panera Bread.