When it comes to using children to “raise awareness”, the left does it best and have done so for many years so skepticism is always warranted when all you’re left with is take-our-word-for-it. 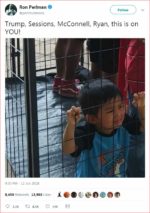 Seeing how, time after time, too many of their sympathy attempts are revealed to be deliberate deceptions, the left has adapted yet again to try and shut down any attempt to make sure their “word” is beyond challenging.

ProPublica has obtained audio from inside a U.S. Customs and Border Protection facility, in which children can be heard wailing as an agent jokes, “We have an orchestra here.”
— ProPublica, 6/18/18

Ginger Thompson is a “senior reporter at ProPublica. A Pulitzer Prize winner, she previously spent 15 years at The New York Times, including time as a Washington correspondent and as an investigative reporter whose stories revealed Washington’s secret role in Mexico’s fight against drug traffickers.”

If she’s that good, why isn’t she still with the New York Times instead with a nonprofit “media” site with limited reach?

Hiding behind “human rights activist lawyer” Jennifer Harbury‘s attorney-client privilege and whistleblower protection may work for now but besides the use of curious terminology like “orchestra” and “conductor” by a border enforcement official and a “clang”, there is justified cause for skepticism over anything secretly-obtained for public dissemination from the callously manipulative left.

As long as there are more people willing to hit a social media “share” button than those who can spell the word “verify”, anything is fair game for scrutiny especially when there’s a documented history of by-any-means-necessary deception.