It only took him mere moments to inform a national television audience that the 2012 shooter in Aurora, Colorado was a white male member of the Colorado Tea Party. There was only one problem: he got the name right, just the person wrong.

In watching the media’s coverage of the shooting in Aberdeen, Maryland, only MSNBC came right out and reported around 11am that the shooter was a “female”. For almost all others involved, it was somewhere they just couldn’t bring themselves to go.

It took other news outlets around four hours to catch up. They probably wanted to be very sure before they shared the bad news. 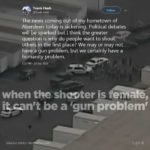 It’s a good thing the woman didn’t use an AR-15. The reporting may have been taken with a greater sense of political urgency.

The politically correct media is very diligent when it comes to adversely identifying a white male and in the past has shown great restraint when a perpetrator may be a protected minority: black, illegal Mexican, Muslim, gay, etc. The fact we’re not being told the demographic of the female shooter is interesting, to say the least.

How easy it was to predict the media as we got two right: black and gay. 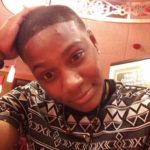 Snochia Moseley, 26, was at breaking point when she killed three people and herself in a shooting at a Rite Aid warehouse on Thursday, friends say.

Moseley had multiple outstanding tickets for registration violations and a lack of insurance, and just last week, the courts were asked for permission to take the outstanding fines to trial. But tickets were not her only problems – Moseley had come out to her family as transgender in December 2016 and wanted to begin hormone therapy.
— Daily Mail (UK), 9/21/18

The 26-year-old showed up at a Rite Aid facility in Aberdeen on Thursday — where she worked temporarily — ready to retaliate.
“Normally, she was a nice person, but she came in in a bad mood,” said co-worker Mike Carre. “She wanted to pick a fight,” he told the Washington Post. “And then she started shooting.”
— New York Post, 9/21/18

The public will have to rely on the reflections of the media and activists to deliver the conclusions on why Moseley killed. We’ve previously argued that social media accounts of those who commit heinous acts should not be scrubbed. The public should be able to peruse previously public accounts so they can come to their own conclusions.

To date, there have been no kneejerk calls for “gun control” legislation as is usually the case made by Democrats to exploit tragedies of this nature, and this is being simply explained away as a “mental health” issue. Should autopsy results be made public, we’ll see if this fits another politically-inconvenient profile that will be explained away as well.