Bonehead of the Day: WMAL’s Chris Plante on ‘PILF’

Back in high school English classes, teachers would tell us “write about that which you know”. That, of course, also went for speaking.

WMAL’s Chris Plante must have been handed a story he didn’t fully read, maybe his coffee really kicked in, but he really got it wrong this time. He read from a story in the Washington Times….

The Texas Democratic Party asked non-citizens to register to vote, sending out applications to immigrants with the box citizenship already checked “Yes,” according to new complaints filed Thursday asking prosecutors to see what laws may have been broken. The Public Interest Legal Foundation alerted district attorneys and the federal Justice Department to the pre-checked applications, and also included a signed affidavit from a man who said some of his relatives, who aren’t citizens, received the mailing.
— Washington Times, 10/18/18

We’ve actually had dealings with the Public Interest Legal Foundation and they are on the voting-integrity front lines, issuing formal complaints and/or suing those who play fast and loose with our voting laws. PILF President and General Counsel J. Christian Adams worked on Donald Trump’s Presidential Advisory Commission on Election Integrity, and PILF Director Hans von Spakovsky is a Heritage Foundation “voter fraud and voter ID, enforcement of federal voting rights laws, administration of elections and voting equipment standards” wonk. The Public Interest Legal Foundation could not have been mistaken for a left-wing anything… that is until Friday, October 19th. 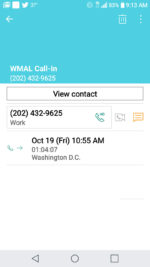 Bob tried to talk to Chris on air and alert him that the Public Interest Legal Foundation are the good guys. After giving the call screener a brief on how Plante really screwed the pooch on this, for some strange reason, Bob remained on hold for over an hour until the show signed off.

Way too many lessons on this one.

Maybe the most important: read well when you are going to comment on the public airwaves because you’re in really tricky territory when you mislabel a group’s ideology, activities and declare that the group is breaking the law.

The Public Interest Legal Foundation: PILF, it’s called PILF which is like pilfer, which is to steal; so PILF is in the business of stealing votes.
— Chris Plante

You can kinda’ hear where Chris may have realized he went too far, was very wrong about the group he was mocking, but in listening to most of his following Monday broadcast, no correction or apology was issued to PILF.

Sad, because Chris Plante would be the first to call out a media organization for getting a story very wrong and not having the decency and integrity to issue a correction, if at all.

Chris Plante issued an on-air correction and apology to PILF.