There are many previous examples of so-called journalists who’ve been caught, albeit long after the fact, lying to their editors and readers, plagiarizing the work of others, and all too many were rewarded with a loose standard of time out before being employed elsewhere.

While President Trump calls the media the “enemy of the people”, journalists insist he’s the liar and they’re way too important to take this lying down… that is until we find out yet another award-winning, partisan “journalist” has been caught fabricating for not just one story, but many.

Europe faces its largest journalistic scandal in years after Der Spiegel, the continent’s biggest-selling news magazine, said one of its star reporters fabricated facts in his articles for years. The magazine’s disclosure, which came after a colleague raised concerns about a recent piece on supporters of President Trump in rural America, was made as Europe’s established media faces attacks by populist forces at home and abroad.

Claas Relotius, an award-winning journalist, resigned from the magazine last week after admitting to making up parts of his reporting in the past decade, Der Spiegel said late Wednesday.

Don’t be all impressed by that “award-winning journalist” cover as The People never get a vote. It’s always within their little elitist circle jerk and their backpatting is supposed to impress us into a trance state of adoration and blind respect.

The arrogance is ever present and when they’re caught, their self-reflection is full of the genuine disbelief that they were actually capable of such deliberate malfeasance. Or maybe it was that they were publicly busted….

“We must see what control mechanisms failed, whether they did or whether we were negligent,” Steffen Klusmann, who will become the magazine’s editor in chief next year, said in a video interview posted on the magazine’s website.

Stefan Niggemeier, an independent media blogger in Berlin and a former Spiegel journalist, said some of the articles at issue appeared to confirm certain German stereotypes about Trump voters, asking “was this possible because of an ideological bias?“

Nah… can’t see where anyone would get THAT impression.

What busted them was this very anti-Trump liberal bias at Der Spiegel as they published 33-year-old Relotius’ account without even a sniff of a desire to verify: you know, Journalism 1.01.

In February 2017, my husband and I attended a concert at our local theater, and were sipping some wine in the lobby before the show started. Several people came up to us at separate times excitedly, and asked, “did you meet the German guy yet?!” I hadn’t, but my spider senses perked up when I heard that he worked for Der Spiegel, a magazine based in Hamburg, and that he was writing about the state of rural America in the wake of Trump’s presidency. 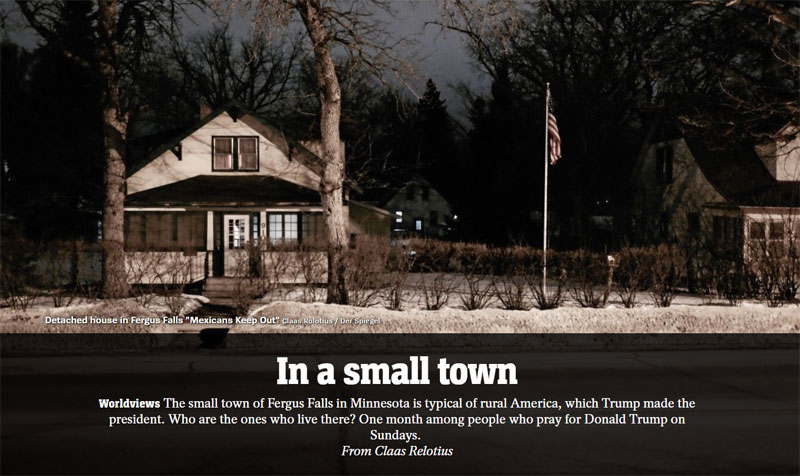 What happened is beyond what I could have ever imagined: An article titled “Where they pray for Trump on Sundays,” and endless pages of an insulting, if not hilarious, excuse for journalism.

There are so many lies here, that my friend Jake and I had to narrow them down to top 11 most absurd lies (we couldn’t do just 10) for the purpose of this article. We’ve been working on it since the article came out in spring of 2017, but had to set it aside to attend to our lives (raising a family, managing a nonprofit organization, etc.)before coming back to it this fall, and finally wrapped things up a few weeks ago, just in time to hear today that Relotius was fired when he was exposed for fabricating many of his articles.
— Michele Anderson and Jake Krohn, 12/19/18

It’s not clear, and that’s probably for a reason, what really triggered the eventual investigation into Relotius’ body of work. Der Spiegel would probably have us all believe it was all about their crack, fact-checking mechanism doing their job. I believe it was the very public piece written by Anderson and Krohn that forced Der Spiegel’s hands that made sweeping this under the rug impossible, which is usually what happens when liberals are stone cold busted. 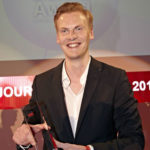 The upside for Relotius is that liberals are a very forgiving lot when it comes to their hate for conservatives, and as long has his fabrications didn’t smear women, Muslims, illegal aliens, abortion clinics, gays, environmentalists, etc., there are always (depending on his fluency in English) positions at MSNBC where plagiarists and fabricators feel right at home.

And he’s also got that white privilege thing going for him. Minority fabricator/plagiarists very seldom get second chances.

This reinforces what has been said here many times on many different occasions: the media and activists need division for selling ads and soliciting donations. People getting along, minding their own business is NOT good for their business and if they have to create controversy, they have and they will. Relotius’ fantasy hit piece on Fergus Falls is a prime example that should be required reading in that what-not-to-do column. But we know this “journalism” is going on now, has been going on for who knows how long, and we need to wait and see who’s next to be forcibly outed.

Der Spiegel will issue faux mea culpas, assuring their consumers that is was an anomaly and fairness and accuracy is and has always been their mission. That is, before their next Trump cover comes out.