In yet another classic case of “do as I say, not as I do”, the mayor of the District of Columbia and city council have mandated its residents to enroll in their healthcare exchanges while also giving the same general public the privilege of paying for those politicians’ health care expenses.

On the first of the month, D.C. Mayor Muriel Bowser held an event at Freedom Plaza to celebrate the start of Obamacare’s annual open enrollment period. She appeared with Mila Kofman, head of the District’s health insurance exchange, D.C. Health Link. In conjunction with the event, the mayor issued a proclamation declaring the open enrollment period “Get Covered, Stay Covered” months, and noting that “residents should visit [D.C. Health Link’s website] to shop for and compare health insurance.”

But in encouraging others to “get covered,” and promoting the D.C. Health Link site, Bowser omitted one key detail: She does not buy the policies that D.C. Health Link sells. My recent Freedom of Information Act request confirmed that Bowser, like most of her D.C. Council colleagues, received taxpayer-funded insurance subsidies to purchase their coverage through the District government, rather than through D.C. Health Link. Thus, DC spent nearly half a million in taxpayer funds because the mayor and council won’t be bothered to enroll in Obamacare.
— Christopher Jacobs, 12/7/18

In 2008, Senators Barack Obama and Hillary Clinton engaged in uncomfortable political gymnastics, criticizing each other for parts of a health care plan that required people to obtain coverage, whether they could afford it or not, under threat of fine.

It’s reality today in the District.

A taxpayer who fails to pay the District of Columbia shared responsibility payment by §a7-5103 shall be subject to all collection, enforcement, and administrative provisions applicable to unpaid taxes or fees, as provided in Chapter I 8, Chapter 41, Chapter 42, Chapter 43, and Chapter 44 of this title.
— D.C. ACT 22-442, 9/5/18

It’s clear despite the generous compensation for their public service, health care premiums and deductibles are out of reach for the mayor of DC and the council, so it’s imperative someone else pick up their “individual responsibility requirement” tabs. 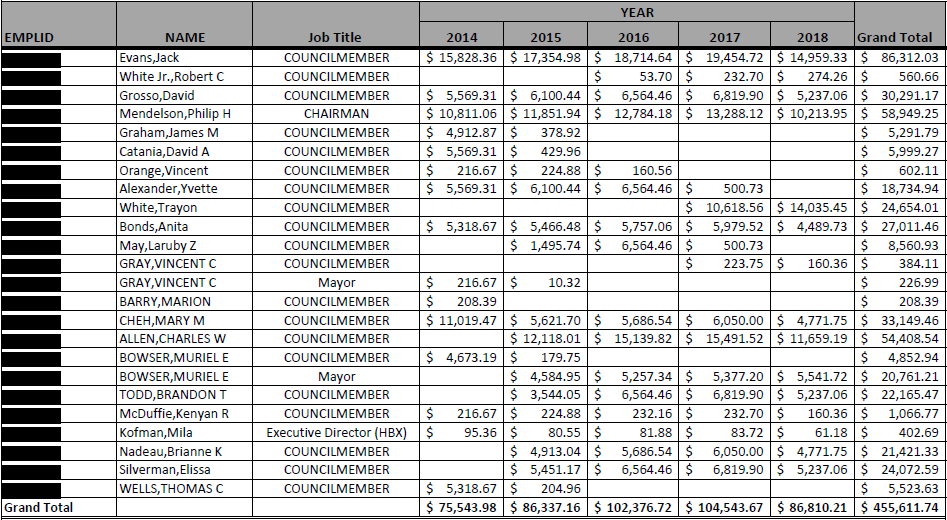 Which is again illustrative of something said here back in 2009: “Liberals create policies so wonderful, they have to force you to use them.” I’d include an addendum, “… and make you pay for those who created the mess you must live with.”

The head of the District’s health insurance exchange—which recommended creating a DC mandate following the removal of the federal tax penalty—doesn’t buy exchange coverage herself. As I previously noted, many exchange heads (and Obamacare supporters) refuse to buy the coverage they promote, including the head of the district’s exchange, Mila Kofman. I asked Kofman whether she, and other exchange employees, purchased exchange coverage. She claimed that she and her colleagues could not purchase exchange policies, because they would lose their employer subsidy in the process.

Only later did I learn that Kofman was paid at the rate of more than $217,000 in late 2016. The idea that a bureaucrat making several multiples of my income would cry poverty, and claim she needed taxpayers to fund her health coverage in addition to her $200,000-plus salary, offended me then, and offends me now.
— Christopher Jacobs, 7/3/18

In 1994, Republican Congressmen Newt Gingrich and Dick Armey created a campaign platform and it’s first tenant speaks a lot of their knowledge of Capitol Hill inside baseball and culture of entitlement, as it read:

FIRST, require all laws that apply to the rest of the country also apply equally to the Congress
— The Republican “Contract with America”

Obamacare will probably go down as the most glaring justification for the Contract’s FIRST priority as federal politicians and their staffs created a nightmare for most of the American people; a nightmare those same politicians and staffers created ways around that only benefited them. In some cases, the American taxpayer was given the honor of paying for those politicians, their staffs AND their families. It could be argued if those who created Obamacare had to actually pay for it out of their own pockets, it NEVER would’ve been passed as it was.

It’s not fair that so many of those in the District of Columbia are not making decent money working for the federal government or the numerous contractors, think tanks, nonprofits, etc. that leech off their convenient proximity to the Capitol. Too many are poor and they voted Bowser and the DC council back in because of the same old promises; promises never delivered.

But Mayor Bowser, the City Council and selected staff (and their families) are well taken care of and their constituents get to pay for it.