But it doesn’t matter where we look: the workplace, the media, think tanks, even in the upper echelons of the government: The Children are now setting the agenda and we’re all going to reap the disaster helicopter parents enabled to come down on all of us. 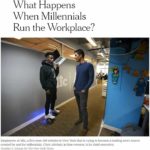 Joel Pavelski, 27, isn’t the first person who has lied to his boss to scam some time off work. But inventing a friend’s funeral, when in fact he was building a treehouse — then blogging and tweeting about it to be sure everyone at the office noticed? That feels new.

Such was a recent management challenge at Mic, a five-year-old website in New York that is vying to become a leading news source created by and for millennials. Recent headlines include “Don’t Ban Muslims, Ban Hoverboards” and “When Men Draw Vaginas.”

“There’s 80 million millennials; we focus on the 40 that went to college,” said Chris Altchek, Mic’s 28-year-old chief executive. But he is still working out how to manage many of the traits associated with his fellow millennials: a sense of entitlement, a tendency to overshare on social media, and frankness verging on insubordination.
— New York Times, 3/20/16

Welcome to the THEIR world where immaturity+arrogance=power.

What’s even worse are those on the left who mostly indoctrinated them (via academia, entertainment or activist nonprofits) and are now empowering them to transform the American way of life into something more comfortable for their proteges; a concept they still can’t master in environments they control (like the college campus) and they’re blaming their overall mental health misery on everyone but themselves.

The insidious are using them because it’s easy to dupe the ignorant and/or intellectually lazy.

Whether it’s Alexandria Ocasio-Cortez or the millennials who are turning our places of employment into their socially-conscious safe spaces where they’re dictating the terms, there will soon be a point where the American people will either succumb to their self-centered demands or tell these children that it is up to them to adapt to a world that made their lives pretty easy (compared to generations before them) and appreciate what they are quickly and efficiently destroying.