Granted, the Inspector General’s report on federal law enforcement possible misconduct before and after the 2016 presidential election is forthcoming, the first slash of the death-by-a-thousand-cuts may have just been issued. 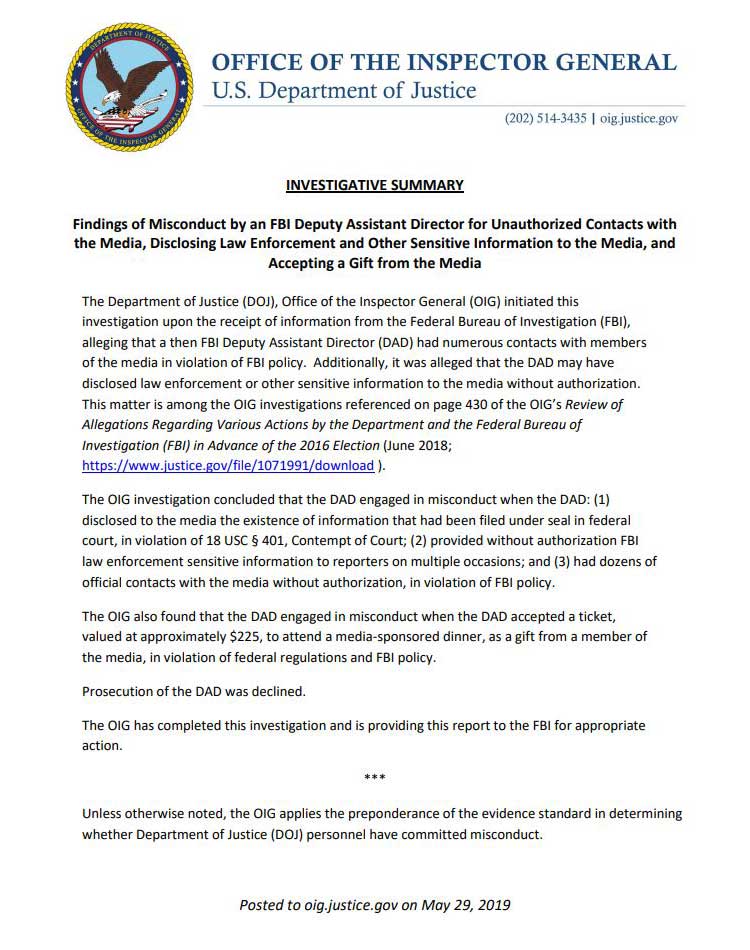 And while the media has been accusing President Trump of “collusion” for the last few years, it appears they went to extraordinary lengths to get FBI employees to talk, regardless of the ethics and procedural protocols in place for a reason.

In addition to the significant number of communications between FBI employees and journalists, we identified social interactions between FBI employees and journalists that were, at a minimum, inconsistent with FBI policy and Department ethics rules. For example, we identified instances where FBI employees received tickets to sporting events from journalists, went on golfing outings with media representatives, were treated to drinks and meals after work by reporters, and were the guests of journalists at nonpublic social events.
— OIG Review of Various Actions by the FBI and DOJ in Advance of the 2016 Election

The inspector general (IG) indicated, without explanation, that “prosecution of the DAD [deputy assistant director] was declined.”

While going out of their way to make life as hellacious as possible for their targets, they DO take care of their own.

The investigation’s findings will be referred to the FBI for potential further action, the IG said.

The official became the second high-level FBI employee to be formally rebuked by the IG over media contacts seen as improper.
— Fox News, 5/29/19

Not saying 100% it’s Strzok, but it wouldn’t be a surprise and “further action” is certainly long overdue.