Black folk know it when they see it. Neighborhoods that rapidly change complexion and those who once called it home are quickly looked at as unwelcome intruders. It’s called “gentrification” and the neighborhood homes (adorned with the customary bars on the windows you only see in the Hood) are now being replaced with cookie-cutter, boxy, unattractive but expensive developments that are driving generational residents out.

Washington, D.C. is no different and with the future opening of an Amazon HQ right across the Potomac in Crystal City, real estate is now at a premium and “affordable housing” needs are not only a necessity, but a tax lure for overspending politicians. DC’s mayor is no different and she wants input from her constituents.

Mayor Muriel Bowser’s administration will host community meetings throughout the city this summer to establish neighborhood targets laying out how to distribute a total of 12,000 new affordable housing units over the next six years.
— The DC Line, 5/13/19

Be careful what you ask for….

Great, a Democrat mayor hooking up “city employees” but that’s not going to mean much for those who see what’s happening all around them.

Washington, D.C.’s neighborhoods have experienced intense gentrification, resulting in the displacement of more than 20,000 African American residents from 2000 to 2013, a study released Tuesday said. The National Community Reinvestment Coalition’s study of that 13-year period found that the District had the highest percentage of gentrifying neighborhoods out of all the cities analyzed.
— NBC4 Washington, 3/20/19

Here’s the problem: whenever government gets involved, the needs of the people are secondary, especially in areas where show-politicians know they really don’t have to make good on promises to get reelected. Now, where government agencies and career-welfare nonprofits DO overperform is pointing to someone else to provide customer service. 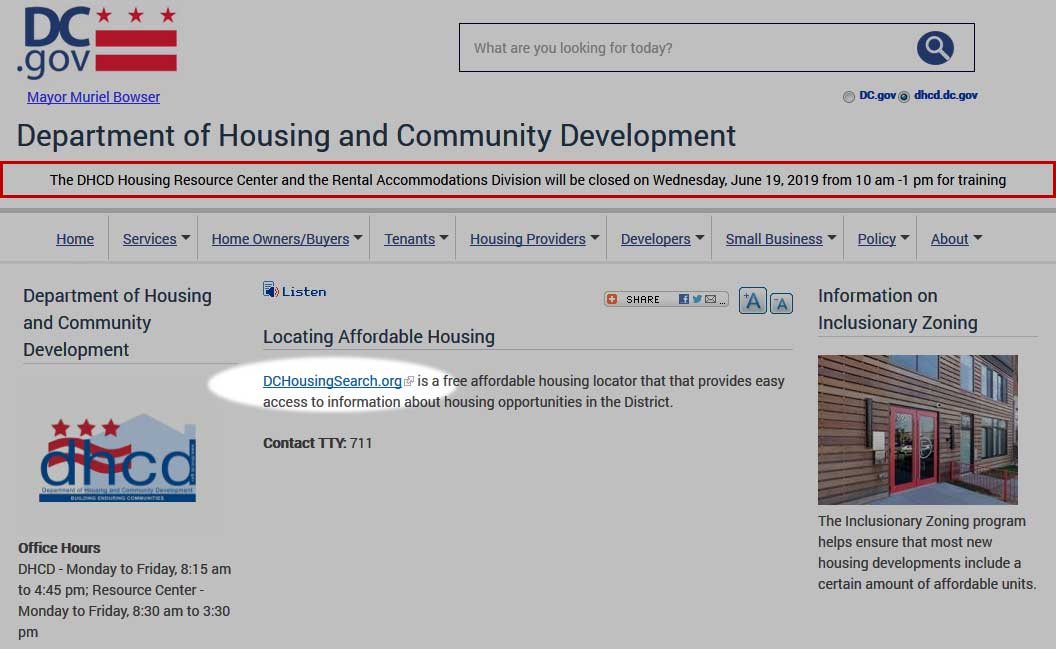 And when you go to DC Housing Search, you won’t find much by way of “affordable housing”. For example, if you search for a 3-bedroom home between $1 and $200,000, the pickins’ are slim… like two.

When you up the price between $200,000 and the website’s “affordable housing” max of $350,000, the available home choices skyrocket… to ten and a few of the pricier ones managed to sneak through. 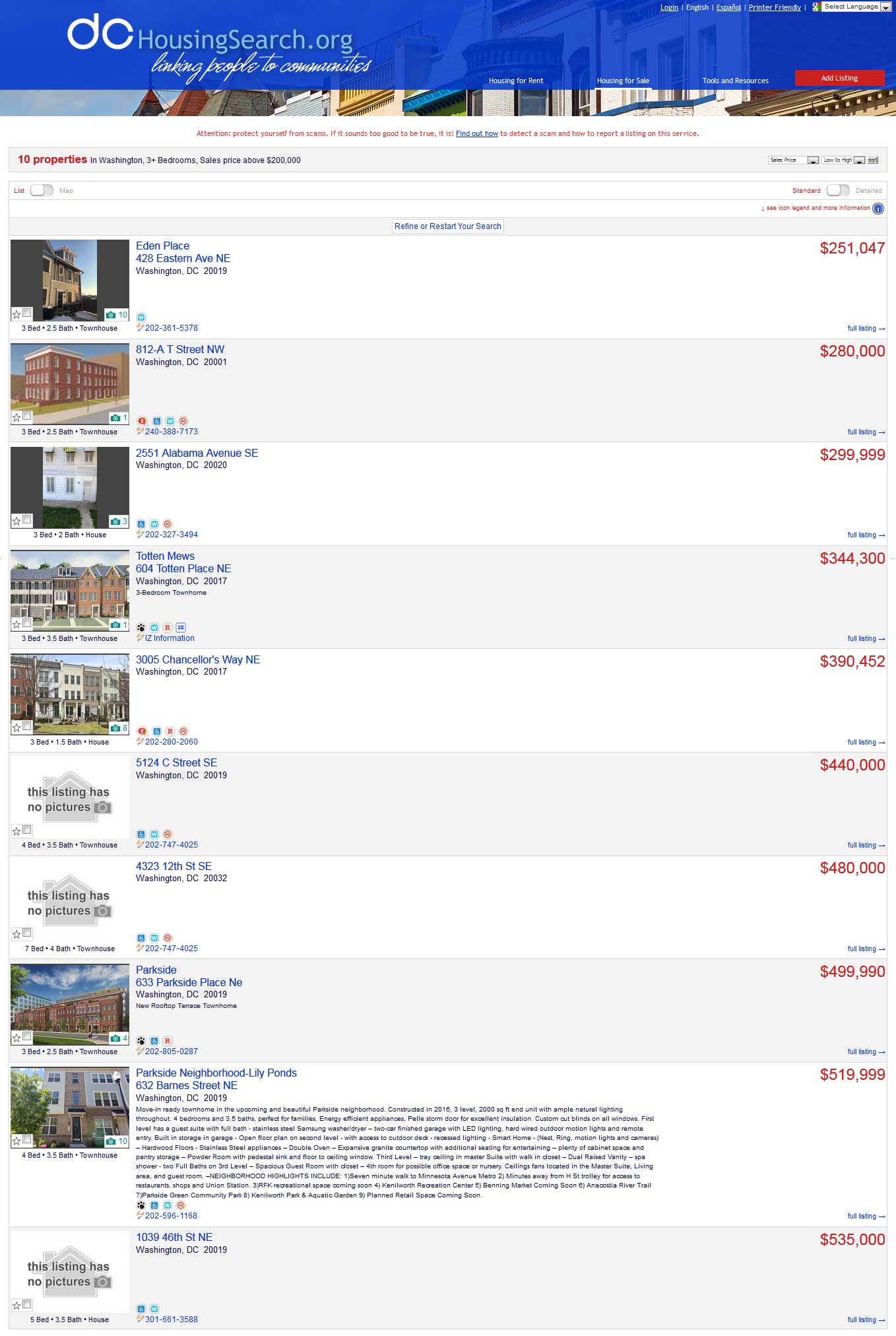 Kinda’ makes you wonder who owns the more expensive units because seldom does anything happen in a predominantly black district that doesn’t benefit the grease-palming, well-connected.

It’s not like blacks haven’t seen this movie before and it usually ends with them being forced out and upwardly-mobile whites (who donate much more to political campaigns than blacks) moving in, demanding and getting bike paths and dog parks.

The tens of thousands who have migrated to the Washington, D.C., over the last five years live in a city that rolled out the proverbial red carpet for their arrival. Infrastructure has been altered, public property has been privatized, the will of voters has been rescinded, minority-owned businesses have been shuttered and the bodies of people of color have been stopped and frisked to accommodate and enhance the respective presence and comfort of newcomers.
— National Community Reinvestment Coalition, 3/18/19

And speaking of surveys…

The District had the highest rate of homelessness in a new survey that looked at the problem in 32 U.S. cities.

The “Hunger and Homelessness” survey from the U.S. Conference of Mayors found that D.C. has 124.2 homeless people for every 10,000 residents in the general population. The city also had one of the fastest increases in homelessness between 2009 and 2016, with a 34.1 percent gain. By comparison, New York had the largest increase during that period, at 49 percent.

The office of Mayor Muriel E. Bowser (D) said the report shows that more work needs to be done to battle the city’s shortage of affordable housing.
— Washington Post, 12/14/16

That was then and gentrification only exacerbates an “affordable housing” problem.

Bowser technically isn’t a “liar”. New housing units WILL be built in Washington, D.C. and some will be “affordable” for her constituents.

Who those constituents will end up being is a whole other story, but as long as they vote her back in, do you think she really cares?

As these things gain relevance once a hashtag is attached, DC’s gentrification has gained national attention. Here’s what set it all off.

For 24 years, Donald Campbell has been playing go-go music from his Metro PCS storefront in Shaw, at the corner of 7th Street and Florida NW. Until now. Campbell says that T-Mobile, which acquired Metro PCS, reached out to him about a month ago: “They said, ‘get rid of the music.’ It came from up top that we had to get rid of it,” he says.

According to Campbell, T-Mobile told him that a nearby resident threatened the company with a lawsuit over the sounds that have blared from the speakers since 1995. He says that he had to turn off the music two weeks ago, and since then, “Every day all day, people think we’re closed. People have been complaining, asking what’s going on.”

According to Campbell, the complaint came from a resident in The Shay, a nearby luxury mixed-use development. “We can’t confirm or deny that,” says the person who answered the phone at The Shay’s office, and declined to provide their name. “There have been complaints about the music being extremely loud, but it’s not just The Shay. It’s people who live all over or are visiting the area. It’s not The Shay that has the issue.”

Since one tweet called out the lack of music at Metro PCS on Saturday, people have been using the hashtag #DontMuteDC to talk about the situation. The hashtag is currently trending locally.

Long a tight-knit, predominantly black community, Shaw has changed at such a dizzying pace over the past decade and a half that the neighborhood is often used as a symbol of gentrification across the District. Shaw saw its black population plummet from 78 percent in 1990 to 44 percent in 2010 (that’s from the most recent Census data, but the numbers have almost certainly continued to drop in the ensuing years). Meanwhile, property values have jumped—pushing out many longtime residents, while developers co-opt Shaw and U Street’s history in the names of luxury condo buildings.
— The DCist, 4/8/19

If this isn’t a clear example of the ramifications of gentrification, what is?