We too often see news stories of young people, primarily “teens”, running rampant and looting convenience stores, malls, and/or creating a variety of tumult in the streets. But for all those out there who assume this is the way things have always been because it’s all they’ve personally experienced, it’s not.

There actually was a time when young people spoke only when spoken to because after all, based on limited life experience, just what of value (outside of their immediate feelings) could they really contribute to a conversation? That was very similar to “children should be seen and not heard”: another sentiment of wisdom dismissed when the self-appointed enlightened later determined that our offspring should be fawned over and we really needed to respect what they had to say simply because they exist.

But what really got me was how different communication was in the home.

I was brought up by a father whose very presence in the room garnered respect because… he was my father. But when I went over to one of my white friend’s house, I experienced exactly what Eddie Murphy described in his 1983 HBO special “Delirious”…. 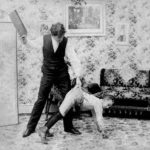 Personally I’d shit on myself before I even dared talking to my father like that, but sadly, this no longer appears to be a cultural differentiation and certainly not limited to the home.

Today we see young people of all backgrounds disrespecting (and assaulting) teachers, law enforcement, the elderly, store employees, referees, politicians, commuters on mass transit or their cars, people just walking down the street and it encompasses almost every potential interaction. Every since the left began their authoritarian incursion into parental rights, they demeaned and ruined the concept of discipline which is the only thing between someone’s kid and the general public. If he or she didn’t fear what would happen if they misbehaved and it got back to the parents, what’s to stop them from creating mayhem in and out of the home?

Parents have lost control of their children, in part because of interfering school personnel and government social workers who’ve told them that being asked to do chores or cleaning their room is tantamount to child abuse, not to mention the bad influence of the entertainment industry that demeans adults in favor of an edgy punchline. Kids know the installed established boundaries, will manipulate them to their advantage and this is just one reason why they’re all too happy expecting all the perks of living at home for free while giving supporting parents the finger when the slightest thing is asked of them.

There is no quick fix for this. Corporal punishment alone isn’t enough.

As long as we live in the society we have today where young people can now dictate how they want to be taught and graded, how they can’t be “judged”, how they want their place of employment to accommodate and evaluate them, and influence how the rest of us must speak and live our lives, the world will be a crazy place.

And it’s all because some people (who were single and had no children of their own) decided how the rest should raise them and gave brats the long leash which we are all paying for to this day.