It takes one to know one but it’s obvious some either can’t read or don’t believe the rules apply to them.

Section 7
On occasion psychiatrists are asked for an opinion about an individual who is in the light of public attention or who has disclosed information about himself/herself through public media. In such circumstances, a psychiatrist may share with the public his or her expertise about psychiatric issues in general. However, it is unethical for a psychiatrist to offer a professional opinion unless he or she has conducted an examination and has been granted proper authorization for such a statement.
— Principles of Medical Ethics with Annotations Especially Applicable to Psychiatry

Even though they are in open violation of the American Psychological Association’s “Goldwater Rule” (especially when it comes to anything President Donald Trump), some in the profession make some of us question their sanity. One such psychiatrist is Dr. Allen Frances who appeared on CNN’s “Reliable Sources” to buttress host Brian Stelter’s latest hypothesis: the president must be nuts.

We don’t work for Fox News, but professional journalists usually catch a misspelling of Hitler and “Josef” Stalin.

If it would get him out of office, I’d say go with it even if it’s inaccurate.

That alone makes one rightfully question the integrity of a mental health infrastructure where decisions that affect people’s lives can be made solely based on the arbitrary feelings of a psychiatrist.

One would also think on a show called “Reliable Sources”, statements as absurd as those made by Dr. Frances would be challenged. They were not and when mistakes are made on national television by professional journalists, blame… “tech difficulties”. 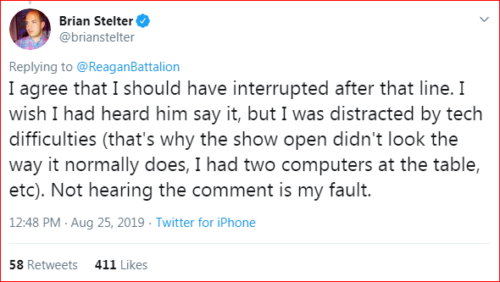 Maybe this is just another illustration of why liberals appear to be so ill-informed. Consider the reliable source.

While we’re not psychiatrists, it could be a safe assumption that a “crazy” president, unfit to serve, would’ve left the economy and foreign policy in relative shambles. Granted, there has been turmoil when it comes to the revolving door of personnel in the White House, but if President Donald Trump is crazy than we definitely need more crazy presidents.

The following are some of President Trump’s “crazy policies” Dr. Frances conveniently left out.

ROLLING BACK RED TAPE: President Trump is rolling back costly regulations that have burdened hardworking Americans and stifled innovation.

FIGHTING BACK AGAINST THE CRISIS NEXT DOOR: President Trump mobilized his entire Administration to combat the opioid crisis that has devastated communities across the country.

STANDING UP FOR THE SANCTITY OF LIFE AND PROTECTING RELIGIOUS LIBERTY: The President is committed to defending the right to life and religious liberty.

KEEPING AMERICAN COMMUNITIES SAFE: President Trump has made clear that his first responsibility is to protect the safety and security of Americans.

ENFORCING OUR LAWS AND SECURING OUR BORDERS: From the first day of his Administration, President Trump has worked to uphold the rule of law and secure our borders.

TRANSFORMING GOVERNMENT: President Trump has followed through on his pledge to transform the Federal Government and increase accountability and transparency.

And all that despite his having to ward off and defend himself (for going on three years) against a deep state, attempted coup d’etat with partisan media cover to an extent we still don’t know. Despite the declarations of Dr. Frances, President Trump has done more to help Americans and is nowhere near the murderous, socialist/communist/dictator death tally. Then again, some Democrats can tolerate a Chairman Mao and all of the wonderful things he did for the Chinese people.

Two of my favorite political philosophers, Mao Zedong and Mother Teresa, not often coupled with each other, but the two people that I turn to most.
— Anita Dunn, Obama White House Communications Director, 10/20/09

Maybe the success the United States is currently experiencing is considered crazy because we’ve elected too many sane Democrat presidents who’ve left the American people worse off than when they took office.