We’re seeing, on an almost daily basis, the textbook definition of “projection” when it comes to the words and deeds of liberal Democrats.

Projection is a basic, self-protective defense, and a process which affects how people understand one another. When we project, we “put” part of ourselves onto other people, usually to “get rid of” something objectionable. It is as if we are throwing a part of ourselves outward and casting it, like the image from a movie projector, onto (really, into) the other person. It often plays out in relationship dysfunction, as the defensive activity bounces back and forth between us over time, operating beneath the radar without being addressed.
— Psychology Today, 9/9/18

Granted, the second grade “I know you are but what am I?” taunt may be appropriately descriptive of the left, the proof of their projection is all around us. They call the right violent while they routinely disrupt, riot in the street, assault counter protesters, shoot at Republican politicians and staff, leaving varying amounts of public and private property damage in their wake. They ridicule the right for not having enough “college-educated” voters while listening to those calling in on the CSPAN Washington Journal “Democrat’s line” is an exercise in frustration, listening to arrogant liberals reciting talking points proven inaccurate or just boldfaced lies weeks, if not years ago.

The left’s introduction of false narratives occur on an almost daily basis and sometimes the target of those narratives has to counter within minutes of the partisan lies as they break. For example….

The acting director of national intelligence threatened to resign over concerns that the White House might attempt to force him to stonewall Congress when he testifies Thursday about an explosive whistleblower complaint about the president, according to current and former U.S. officials familiar with the matter.
— Washington Post, 9/25/19

It took literal minutes for this story, responded to by President Trump during a press conference with the Ukrainian president, to be forcefully and publicly debunked by the subject himself.

The acting U.S. intelligence director denied reports Wednesday that he threatened to resign if the Trump administration tried to stop him from testifying freely before Congress on Thursday.

Joseph Maguire, acting director of National Intelligence, vowed to step down if he was not allowed to appear before Congress, a source familiar with the matter told NBC News. The Washington Post first reported Maguire’s threatened resignation, citing current and former U.S. officials.
— CNBC, 9/25/19

In just the latest example of journalistic malpractice, citing unnamed “current and former U.S. officials” revealed yet again the perils of quotes being introduced into the public debate; “officials” who may or may not even exist but as long as it’s published in the media, “sources” are protected, real or imagined and the Democrat base has another tidbit to recite ad nauseam.

With that, it’s easy to understand why liberal Democrats are STILL repeating the Mueller Report-debunked “Russia collusion” hoax, while any Democrat within earshot of a microphone repeats that “foreign election interference, “threat to our democracy” jingle. It’s also easy to see why they and especially their media so hate President Trump. He’s challenged them, their power to influence, and especially their integrity.

But what’s most laughable is even though Democrats and their allies depend on the ability of their base to recite anything issued, that same base is being told that conservatives and Republicans are the dumb tools.

I also don’t think that hyperbole would be overstating it to say that some Democrats just think that the president’s base is too dumb to know the difference, that they wouldn’t get — even if all of the evidence pointed toward impeachment, pointed toward this being someone who needed to be removed, that the president has fooled enough people, that they are so gullible, that they will not vote against him no matter what. That’s the vibe I get from some Democrats — that this whole thing is a waste of time, because “those people” are going to pick him no matter what.
— NPR “1A” podcast, 9/25/19

That explains why so many on the left believe the “deplorable” base of President Trump’s base can’t be depended on to abandon him on Election Day 2020, and seeing how they still haven’t been adequately punished for voting against Hillary Clinton in 2016, removing him from power now may be the only way to stop those “too dumb” from voting for him again.

But the left’s ability to consume without verification becomes equally problematic when, for example, the chairman of the House Intelligence Committee ad libs an interpretation of a phone transcript between Ukrainian president Volodymyr Zelensky and Donald Trump; an interpretation of Trump’s words that will be recited verbatim as often as those who still, to this day, believe Sarah Palin said “I can see Russia from my house!”

We’ve been very good to your country. Very good. No other country has done as much as we have. But you know what, I don’t see much reciprocity here. You know what I mean? I hear what you want. I have a favor I want from you though. And I’m going to say this only seven times, so you better listen good. I want you to make up dirt on my political opponent, understand? Lots of dirt, on this and on that. I’m going to put you in touch with people, and not just any people. I’m going to put you in touch with the Attorney General of the United States — my Attorney General, Bill Barr — he’s got the whole weight of American law enforcement behind him. And I’m going to put you in touch with Rudy, you’re going to love him. Trust me. You know what I’m asking, so I’m only going to say this a few more times, in a few more ways. And don’t call me again. I’ll call you when you’ve done what I asked.
— Rep. Adam Schiff (D-CA), 9/26/19

It’s truly sad knowing how many are going to confidently quote and be motivated by Schiff’s attempt at parody.

Having to engage in political dialogue with the arrogant is bad enough. Add incorrect to arrogant and you have a pending exercise in futility on your hands, but then again, that’s probably how the political left wants it. 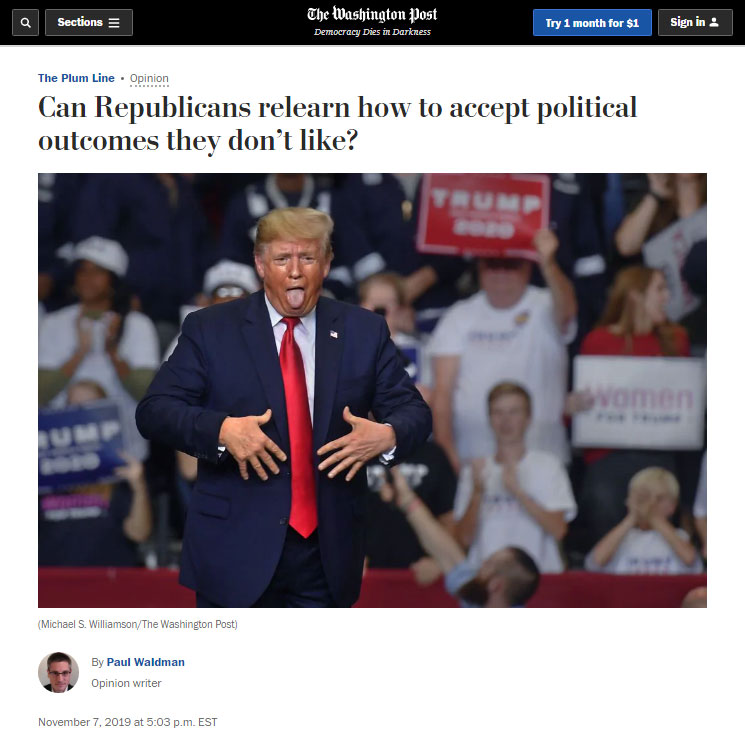 That headline should be THE example of Democrat projection since November 2016.

Because when the next few investigations into the Clinton Foundation, FISA abuse, and anything John Durham sprinkles on top are completed and reports are released, the left will need to depend on their base projectors. The Democrats will employ the “deny, delay, destroy” strategy perfected by Bill and Hillary during the last impeachment saga, and those three D’s were left simple enough for a reason.