Like many instances in liberal Democrat politics, the things they accuse their opponents of doing they’ve done themselves and often to a greater degree. Democrats have accused the Trump campaign of colluding with Russia to influence the election when it’s clear Hillary’s campaign was aided by everyone from a former MI6 officer to “deep state” rogues in our intelligence agencies. Democrats are accusing President Trump of holding aid to Ukraine hostage in a phone conversation in exchange for damaging information on former Vice President Biden and his son, Hunter.

It’s not like anyone would have reason for suspicions….

The fired prosecutor at the center of the Ukraine controversy said during a private interview with President Trump’s personal attorney Rudy Giuliani earlier this year that he was told to back off an investigation involving a natural gas firm that was linked to Joe Biden’s son, according to details of that interview that were handed over to Congress by the State Department’s inspector general Wednesday.

For those of you who are wondering why Democrats are really after Giuliani….

Fox News obtained a copy of Giuliani’s notes from his January 2019 interview with fired Ukrainian prosecutor Viktor Shokin in which he claimed that his “investigations stopped out of fear of the United States.”

“Mr. Shokin attempted to continue the investigations but on or around June or July of 2015, the U.S. Ambassador Geoffrey R. Pyatt told him that the investigation has to be handled with white gloves, which according to Mr. Shokin, that implied do nothing,” the notes from the interview stated. The notes also claimed Shokin was told Biden had held up U.S. aid to Ukraine over the investigation.

Biden, who has been seeking to unseat President Trump in 2020, once famously boasted on camera that when he was vice president and spearheading the Obama administration’s Ukraine policy, he successfully pressured Ukraine to fire Shokin who was the top prosecutor at the time. He had been investigating the founder of Burisma Holdings, where Hunter Biden had a lucrative role on the board.
— Fox News, 10/2/19

Joe and Hunter Biden are hardly worthy of the basis for a presidential impeachment, that is unless there’s a lot more involving Ukraine and American politics that will be coming out soon enough.

Joe Biden isn’t the smartest politician around and coupled with his diminishing cognitive skills, his recent comments at a Council on Foreign Relations event have required extraordinary measures to keep his sloppy braggadocio from the American people.

The importance of the above clip is how rarely (if ever) it’s been aired on ABC News, CBS News, NBC News, PBS, NPR, CNN, MSNBC or even Fox News. We all know had Donald Trump sat in that chair and bragged about getting a prosecutor who was investigating one of his family members fired, how many Americans would’ve memorized the exchange by now.

One reason Biden’s incriminating comments haven’t been aired, aside from liberal media protection, is that it appears to have been edited-out from the original and re-uploaded (with YouTube assistance and masking?), thus it’s technically nonexistent except for early third party cutdowns.

The video of the Foreign Affairs Issue Launch With Joe Biden also oddly has no visible upload date, while ninety-nine point nine percent of videos uploaded to YouTube are timestamped by default. 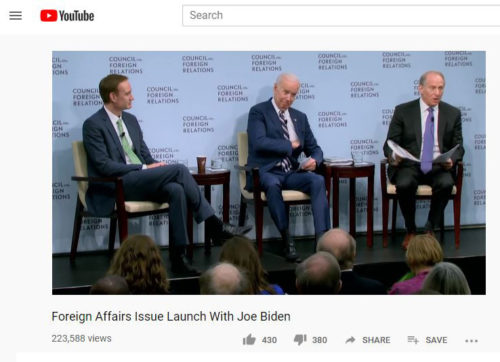 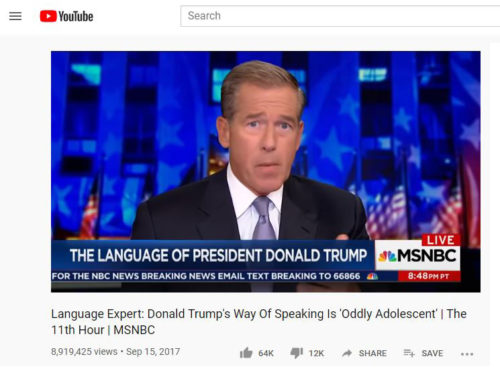 This is rather extraordinary.

It’s important to emphasize that in this Ukraine scandal, there isn’t any evidence that Hunter Biden or former Vice President Joe Biden broke any laws as the younger Biden received his lucrative state-owned Ukrainian natural gas company board post.

No “evidence” only because Democrats and their media have made the concerted effort to keep Joe’s arrogant, direct intervention and obvious quid pro quo from the American people.

But let’s be even more clear. It’s not just foreign company boards of foreign-owned investment funds at play. Children of elected officials from both parties have received lucrative jobs from U.S. companies, regardless of their experience or comparable salaries for the same positions.
— CNBC, 10/14/19

We hope this puts matters “Ukraine” in better context seeing how that appears to be the last thing Democrats and their media want.