Impeachment: Could Trump Be Enjoying the Validation of Success?

After the Democrats achieved their long-sought after impeachment blemish on President Donald Trump’s name in the history, Capitol Hill received the news of another Republican who’s seemingly thrown up his hands in disgust.

Rep. Mark Meadows (R-N.C.), a top ally of President Trump, announced Thursday morning that he will retire from Congress at the end of his term. Meadows, a four-term lawmaker who represents part of western North Carolina, said in a statement that he “struggled” with leaving what he has long considered a “temporary job.”
— The Hill, 12/19/19

Whatever the future holds for Congressman Meadows, it’ll surely be more gratifying than having to deal with the cesspool that is Washington, D.C. But for those who know of the culture of self-serving leeches the populate the Hill, one can understand why Meadows may rightfully asking, “Who needs this shit?”

The upcoming John Durham report (with possible indictments) should be scaring the crap out of the fat, happy and comfortable in the federal government cabal, but we’ve all seen how the bureaucracy circles the wagons and protects itself while cavalierly manipulates exonerating evidence to railroad those who are politically opposed to them. These people, who live very comfortable lives on the payroll or pensions, sleep well at night while dutifully destroying reputations, livelihoods, bank accounts, and expose others to possible jail time but are given safe haven to play the victim when their activities could put them into the jeopardy they’ve exposed others to.

It’s safe to say NO politician on the Republican side could endure the shit Donald Trump has had to endure. Trump knew what was coming and it’s clear he revels in the daily obstacles thrown his way on a daily basis by the Democrats, their media, and perpetually aggrieved Never Trump so-called conservatives. It could be safe to say he may even enjoy it because he’s actually proving how worthless politicians and the embedded government employees promise and are in no hurry to ever deliver.

Donald Trump is reacting to impeachment just as we have come to expect. It is all about him personally, this is a personal insult, that he’s suffered a personal injury. He is not thinking about how best to lead the nation out of this crisis. He is not thinking about healing wounds, or unifying the body politic and rehabilitate himself as president. He is seething in raw anger and wants cold-hearted “revenge” upon people he sees as his enemies.
— Daily Sound & Fury, 12/19/19

Isn’t it funny how liberals feel entitled to inflict as much damage to a Republican as they can imagine but get all bent when the cannon is aimed back at them?

In the real world outside the Beltway, businesses try to destroy their competition. This concept is not new to Donald Trump and the top dog is always the target. Impeachment can also be seen as a personal validation that he’s created an engine no Democrat will ever be able to replicate thus all crosshairs are on the leader.

President Trump has overachieved, between the historic economic numbers, record-low unemployment in all demographics and groups, foreign trade policy where Americans are the last to be screwed, NO new wars were hundreds of thousands of Americans are sent to foreign theaters with vague terms of engagement, and a border where illegal immigration numbers are declining. Trump’s communication style is not nuanced where every sentence has to be parsed, was focused grouped and distributed to friendly media outlets for safe, partisan distribution.

While he’s repeatedly called a liar by the media, the case can be made that it’s not easy having every factoid readily available when you have dozens of microphones in your face and I defy anyone reading this to assert they’d be able to be 100% accurate in everything said publicly. But this is also the same media that selectively edits, omits, and editorializes against those they ideologically despise and covers for those they fawn over, assuming the American people are too stupid to tabulate their daily inconsistencies. 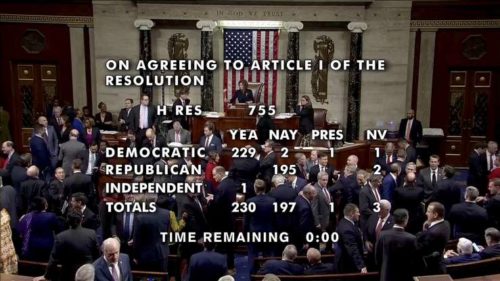 Democrats are dancing in the streets over impeaching Donald Trump; some stupidly assuming that Mike Pence is now the President of the United States, requiring a basic civics lesson not provided in our annual $700 billion dollar-plus public school system.

The vote means that Trump has been “impeached” and the case heads to the Senate. Trump still serves as president. It’s up to the Senate to hold a trial and decide whether to remove him.
— The ultimate guide to the Donald Trump impeachment saga

Only Donald Trump could see the adjective of being an impeached president as a badge of honor. The results of his policies are historic and provide a contrast that no Democrat running for president can even dream of maintaining, in fact everyone knows he or she will destroy the state of the nation as it stands today. A president with these kinds of numbers will win reelection and everyone knows it. The only remaining option is to either remove or severely damage President Trump.

It’s too late for Democrats to tread carefully. They pulled the trigger on impeachment and don’t think President Trump didn’t expect this when he first considered running, winning, draining the swamp, achieving beyond all expectations, calling out the media, and the response that would be coming. He’s probably enjoying this shit, deeply flattered to the extent he’s been targeted for ultimate political destruction and can’t hardly wait to take things to the next level.

In November 2020, the Americans who’ve been dismissed by this fiasco will have their say in the process and let’s hope defeated and demoralized Democrats will be sent packing asking, “Who needs this shit?”