Like most things surrounding anything involving President Trump, Republicans and so-called evidence during this whole impeachment fiasco, the latest uproar was initiated by a Michael McAuliffe whose Twitter profile describes him as “Congressional reporter. NYDN, others currently. Ex-HuffPost, ABCNews, UPI.”

There may be a reason why this McAuliffe isn’t with a major news outlet…. 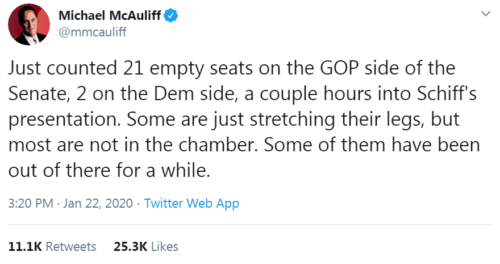 Since this appeared to be rather juicy, a few aggregating blogs and a member of the #Squad ran with it as gospel.

’21 Empty Seats’: More Than One-Third of GOP Senators Reportedly Left Room During Schiff’s Speech
People Are Calling Out Republicans for Breaking Senate Trial Rules by Leaving ’21 Empty Seats’
At one point more 1/5 of the Senate — 21 members — were out of the chamber
‘You should quit’: Rashida Tlaib blasts GOP senators for taking breaks from impeachment trial

When something damaging to Republicans appears online, verified or not, the usual suspects run with and blow it up even more.

Oddly enough in a random act of journalism, both CNN and MSNBC decided to verify via people who were actually in the room (Senators Amy Klobuchar and Chuck Schumer). Unfortunately for the media, they didn’t get the responses desired that could have given them more anti-Republican Senator scolding for breaking rules. Instead, it’s encouraged more falsities to be distributed by the base.

According to the rules, Senators are not allowed to leave the floor for any reason while the impeachment trial is in session.
— PoliticusUSA, 1/22/20

Not sure where that line appears but the Senate chamber could get really ripe, without appropriate precautions, had that “rule” not been a figment of the imagination.

When you know your audience will blindly accept your word and are too lazy to look things up themselves, misleading is easy. By the way, there’s no rule stating they have to be there in the first place. According to rules of impeachment decorum distributed to the Senate by Mitch McConnell and Chuck Schumer….

• No live tweeting. Cell phones and other electronic devices should be left outside.

• No outside reading material. Only documents related to impeachment should be brought into the Senate chamber.

• No talking. Senators should refrain from speaking to their neighbors while the case is presented.

• Hit pause on presidential campaigns. Senators should plan to be in attendance at all times during the proceedings.
— US News & World Report, 1/16/20

The only official guidance issued makes no reference to attendance, mandatory or casual. The closest we get is….

But that didn’t take long from things being taken an ominous step or two further.

I’m not sure the chief justice is fully aware of just how rare it is, how extraordinary it is for the House members to be able to command the attention of senators sitting silently for hours or even for minutes, for that matter. Of course, it doesn’t hurt that the morning starts out every day with the sergeant-in-arms warning you that if you don’t, you will be in prison.

It’s our hope that when the trial concludes and you’ve heard us and you’ve heard the president’s counsel over a series of long days that you don’t choose imprisonment instead of anything further.
— Rep. Adam Schiff, 1/22/20

It’s clear Congressman Schiff is again ad-libbing as he’s taking that “imprisonment” thing way out of context to use as a partisan club.

When the managers of an impeachment shall be introduced at the bar of the Senate, and shall signify that they are ready to exhibit articles of impeachment against any person, the presiding officer of the Senate shall direct the Sergeant-at-arms to make proclamation, who shall, after making proclamation, repeat the following words, viz: “All persons are commanded to keep silence, on pain of imprisonment, while the House of Representatives is exhibiting to the Senate of the United States articles of impeachment against.”
— Senate Impeachment Rules, March 2, 1868

So, we have another manufactured controversy meant to inflame the Democrat base; a base relied upon to believe what they’re told.

Mitch McConnell won’t allow recording on the Senate floor during the trial, so there is no video of the Senators, but other Senators saw it happening….
— Daily Sound & Fury, 1/23/20

The upside is that sometimes the truth comes out, live, where it can’t be “edited for time” or omitted altogether.