Elitist Condescension: Lemon and Guests Insult Half the Nation on CNN

The media punditry have their on-air and off-air personas. In order to be marketable, most try to portray themselves as nice, intelligent people in front of the camera. But sometimes, guards are let down when in the presence of the like minded and they let us know who they are and what they really think.

New York Times columnist and CNN contributor Wajahat Ali and ex-GOP strategist Rick Wilson participated in a panel with Don Lemon on Saturday night. They were discussing the recent fight between Secretary of State Mike Pompeo and NPR’s Mary Louise Kelly. During an interview, Pompeo screamed at Kelly and demanded she locate Ukraine, the topic of the initial disagreement, on an unlabeled map.

While discussing the confrontation on CNN, Wilson pivoted the conversation to the president’s supporters and suggested that Trump supporters wouldn’t be able to find Ukraine on a map and that they would label being able to do so as a sign of elitism. Ali and Lemon laughed at Wilson, who used fake a southern accent to sound like a Trump supporter. Ali later chimed in with his own ridicule of Trump backers while Lemon laughed so hard he used a tissue to wipe tears from his eyes.
— Washington Examiner, 1/28/20

The written recap doesn’t do the segment in question justice….

If President Trump is so stupid, why is the economy at a historic high and unemployment for all demographics, illegal immigration at historic lows, we’re at relative peace with the world, and despite their best efforts (which would’ve melted the average Republican years ago), he’s STILL in office? How did his stupid supporters see this coming and vote for him despite the informed, intelligent warnings issued by intellectually-superior Democrats and their media? Could it be the president and his supporters are really the smart ones and the pundits are not?

Not if you see Trump supporters the way the liberal elite sees and portrays them.

Try listening to the Democrats line during any episode of CSPAN’s Washington Journal.

Of course after the backlash, Don Lemon resorted to blame-shifting and the liberal standard That’s-not-who-I-am response. We must accept his… explanation.

New York Times columnist Wajahat Ali is portraying himself as the victim for cover…. 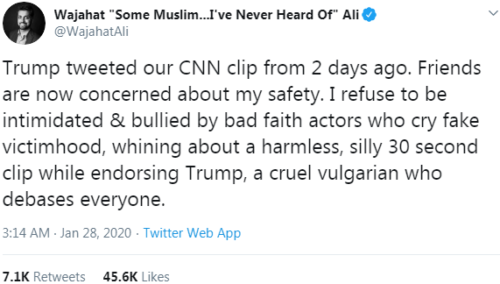 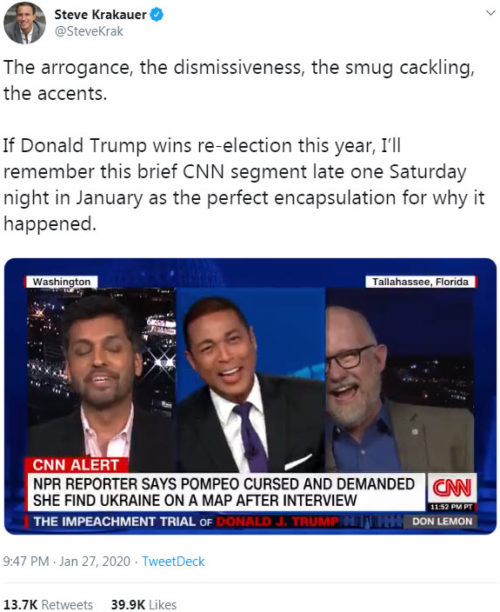 To his credit, “ex-GOP strategist” Rick Wilson is standing by his insults.

Rick Wilson was unapologetic when Cockburn contacted him for comment this morning.

‘Once again, the MAGA tough guy “fuck your feelings” crowd demonstrates that what really drives them is a grinding social anxiety fueled by a weaponized and monetized outrage machine,’ he said. ‘What set the White House off’ was really that ‘Trump hates being called out for his utter ignorance of the world; all the phony outrage at me is just Trump fundraising grifters milking the MAGA herd.’
— Spectator, 1/28/20

The CNN debacle was not an anomaly. It will happen again and again all the way up to Election Day and beyond.