Would You Want Biden’s State Dept. Negotiating YOUR Hostage Release?

Not to say the State Department is full of incompetents, but there have been enough examples of people who’ve languished behind enemy for years while an over-paid bucket of unaccountable bureaucrats moved on to the next inconvenience.

So, it you were currently in hiding in Afghanistan, running low on money, food and knowing that at any time your door could be kicked in and you’d either be shot there or dragged in the street to be beheaded, would you have any optimism that the U.S. Department of State (under Joe Biden) would be soon coming to get you out?

On Monday Secretary of State Antony Blinken declared ‘a new diplomatic mission has begun’ in Afghanistan to try and get those remaining Americans out. He vowed to use diplomacy and leverage to bring out any Americans, allies, or Afghanis who assisted the US and want to leave, as critics pounded Biden for allowing the withdrawal before all Americans were out, comparing those who remained to hostages.
— Daily Mail, 8/31/21

While the left and their media have been gaslighting the American people on a variety of issues for years, their latest is the whole Afghanistan debacle is the fault of Donald Trump and with regards to those left behind, oh well. Let’s move on to things more important, like January 6th.

One thing is for sure: Donald Trump would NEVER leave hang Americans out to dry behind enemy lines and wouldn’t leave it solely to the State Department to use “diplomacy” (“strongly-worded” letters) on tyrants.

He’d didn’t rely solely on the impersonal Department of State bureaucracy to deal with some of the United States’ prominent adversaries (North Korea, China, Iran, Yemen) and his track record gave room for optimism.

Otto Warmbier, an American sentenced to 15 years’ hard labor by North Korea for alleged “anti-state acts,” has been released. Secretary of State Rex Tillerson announced Tuesday morning that Warmbier, 22, was on his way back to the U.S. to be reunited with his family.

Warmbier has apparently been in a coma since shortly after his trial, according to The Washington Post. He was sentenced in March 2016. A statement from his parents, Fred and Cindy Warmbier, dated June 13, stated: “Otto is on a medevac on his flight home. Sadly, he is in a coma and we have been told he has been in that condition since March 2016. We learned of this only one week ago. We want the world to know how we and our son have been brutalized and terrorized by the pariah regime in North Korea. We are so grateful he can finally be with people who love him.”
— Newsweek, 6/13/17

Three UCLA basketball players released from China for shoplifting thanked President Donald Trump, who later said, “you’re welcome.” Freshmen LiAngelo Ball, Cody Riley and Jalen Hill spoke at a news conference Wednesday at the UCLA basketball stadium, the first time they had spoken publicly since Nov. 7, when they were held in Hangzhou. The three athletes were arrested a day before Trump’s arrival in China, and Trump said he spoke to his Chinese counterpart about the situation.

I had a great conversation with President Xi,” Trump said aboard Air Force One on Tuesday. “He was terrific, and they’re working on it right now. And hopefully everything is going to work out.”
— NBC News, 11/16/17

Since President Donald Trump took office, his administration has secured the release of 17 prisoners foreign governments had detained.

“We’ve had 17 released, and we’re very proud of that record. Very proud. And we have others coming,” Trump said Saturday evening as he welcomed home Joshua Holt, an American citizen who had been detained in Venezuela for two years without trial. Unlike his predecessor, the president has managed to bring these prisoners home without freeing terrorists or paying millions of dollars in suspected ransom payments.
— Daily Caller, 5/27/18

And that was as of 2018. Who knows how sooner these could have occurred had it not been for the partisan, and in some cases, manufactured scandals that took up valuable time and attention of the Trump Administration.

President Donald Trump announced Thursday that Lebanese-American Amer Fakhoury has been released from prison, describing the development as “very big.”

“Today we are bringing home another American citizen, big thing, very big,” Trump said at the beginning of a coronavirus task force briefing. Trump also said that the US is working hard to secure the release American journalist Austin Tice, who disappeared in Syria in 2012. Separately, Secretary of State Mike Pompeo announced that Iran has released American Mike White on medical furlough.
— CNN, 3/9/20

President Donald Trump has secured the release of two American hostages held captive by Houthis in Yemen, Secretary of State Mike Pompeo said on Wednesday. The two Americans, Sandra Loli and Mikael Gidada, and the remains of a third, Bilal Fateen, were released in exchange for the return of about 250 of the Iranian-backed Houthi rebels from Oman, according to the White House.

Kash Patel, a deputy assistant to Trump who worked on the deal, told The Wall Street Journal that Loli had been held by the Houthis for about three years and Gidada was held captive for about a year.
— Fox News, 10/4/20

One would think President Joe Biden would personally understand and appreciate the American tradition of not leaving anyone behind.

Erik Prince, the co-founder of defense contractor Blackwater, ​is responding after the White House took a shot at him for offering to fly people out of Afghanistan on charter flights for $6,500 a seat — recalling that Blackwater ​soldiers had to rescue Joe Biden, Secretary of State John Kerry and Defense Secretary Chuck Hagel when they got lost in a snowstorm in 2008. 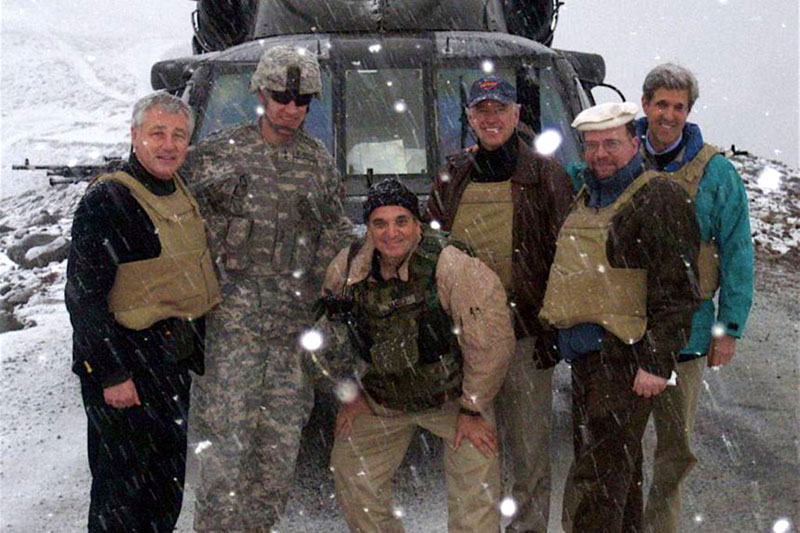 “They were on a congressional visit to Afghanistan in the winter and their US Army helicopter got lost in a blinding snowstorm and set down in Taliban territory on the side of a mountain,” he told Tucker Carlson. “And the US military launched a ground convoy to get them and they got lost and the Blackwater guys launched and they did not get lost. And we recovered them. We rescued them from Taliban territory. That was the winter of ’08,” he said.
— New York Post, 8/26/21

An Afghan interpreter who helped rescue then Senator Joe Biden and two other senators in a valley in Afghanistan is stranded in the country under Taliban rule pleading to be rescued on Tuesday.

“Hello Mr. President: Save me and my family. Don’t forget me here”, the Wall Street Journal quoted him as saying.

Mohammed’s (who asked not to use his full name) visa application became stuck after the defense contractor he worked for lost the records he needed for his application. The Afghan interpreter tried to join the thousands of people who swarmed Kabul airport in an effort to get on one of the evacuation flights out of the country, but he was “rebuffed by US forces.” He says he could get in but US forces would not allow him to take his wife and four children with him.
— Al Arabiya English, 8/31/21

Obviously some people are more deserving and entitled to rescue than others and it must’ve been a relief to Joe Biden as it’s doubtful “strongly-worded” letters from the State Department would have been of any meaningful assistance when HE needed it.