A place that believes in the power of creativity to create the change we want to see in the world.
A place that creates behaviour change at scale for business and society.
A place that welcomes ‘Adam&everyone’ and helps them be the best they can be.
A place that recognises its impact on the world and is changing for the better.
— adam&eveDDB

An ad was created by adam&eveDDB and approved by client John Lewis Finance.

What could go wrong…?

The ad was… “misleading”.

Retailer John Lewis has been forced to pull an advert featuring a young boy dancing in a dress after a watchdog branded it ‘potentially misleading’.

However, its removal had nothing to do with the uproar the ad caused, with many clutching their pearls at the mere sight of a young boy wearing a dress and make-up and merrily dancing around the house to Edge Of Seventeen (the AUDACITY), but instead was down to the damage depicted in the ad not actually being covered by the company’s insurance it was promoting.

According to the company, the advert has been withdrawn after the Financial Conduct Authority deemed it ‘potentially misleading’ and would cause ‘confusion’ about the company’s home contents insurance offering.
— Metro (UK), 10/28/21

Wow. A company actually pulling an ad because a product may not be all they say it is. 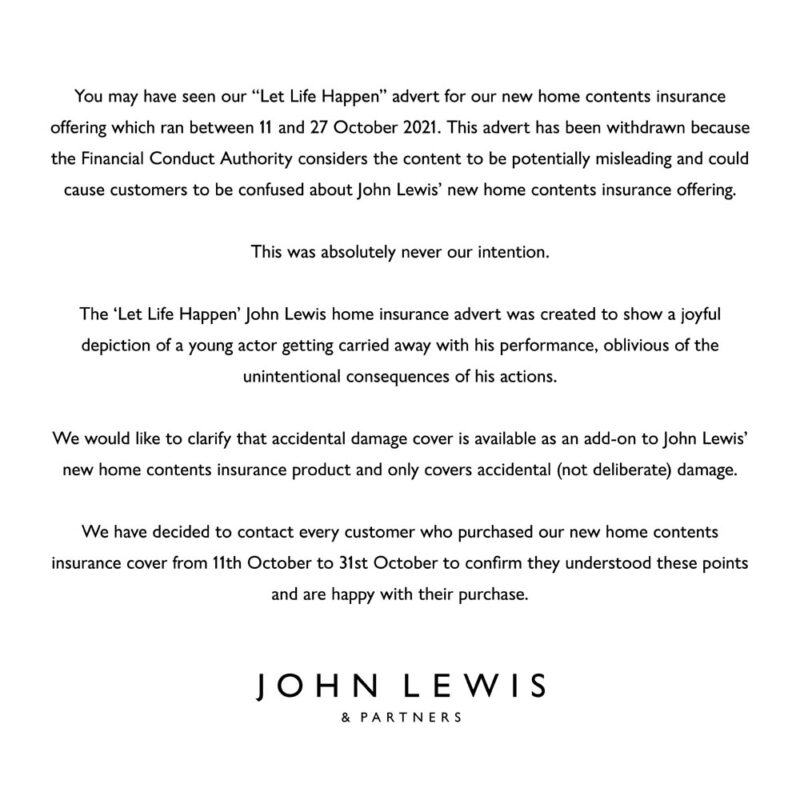 So, it the ad was yanked because it was “misleading” as the damage the boy was doing in the video wouldn’t necessarily be covered under a home insurance policy; NOT because the viewing public may have been outraged that a young boy would be made up and dressed as a girl in a woke advertisement, period.

Exactly who has been misled?