The beauty of being a liberal news outlet is that they know their intellectually-superior audience will blindly believe any bullshit you present and will dismiss the counter truth because it won’t fit their desired narrative. And when you’re partially funded by taxpayers, thus unaccountable, you can continue on with impunity.

It was pretty jarring earlier this month when the justices of the U.S. Supreme Court took the bench for the first time since the omicron surge over the holidays. All were now wearing masks. All, that is, except Justice Neil Gorsuch. What’s more, Justice Sonia Sotomayor was not there at all, choosing instead to participate through a microphone setup in her chambers. Sotomayor has diabetes, a condition that puts her at high risk for serious illness, or even death, from COVID-19. She has been the only justice to wear a mask on the bench since last fall when, amid a marked decline in COVID-19 cases, the justices resumed in-person arguments for the first time since the onset of the pandemic.

Now, though, the situation had changed with the omicron surge, and according to court sources, Sotomayor did not feel safe in close proximity to people who were unmasked. Chief Justice John Roberts, understanding that, in some form asked the other justices to mask up. They all did. Except Gorsuch, who, as it happens, sits next to Sotomayor on the bench. His continued refusal since then has also meant that Sotomayor has not attended the justices’ weekly conference in person, joining instead by telephone.
— Nina Totenberg, NPR, 1/18/21

However, it doesn’t appear to be true as New York Times Supreme Court reporter Adam Liptak was one of the first to dispute Totenberg’s musing. 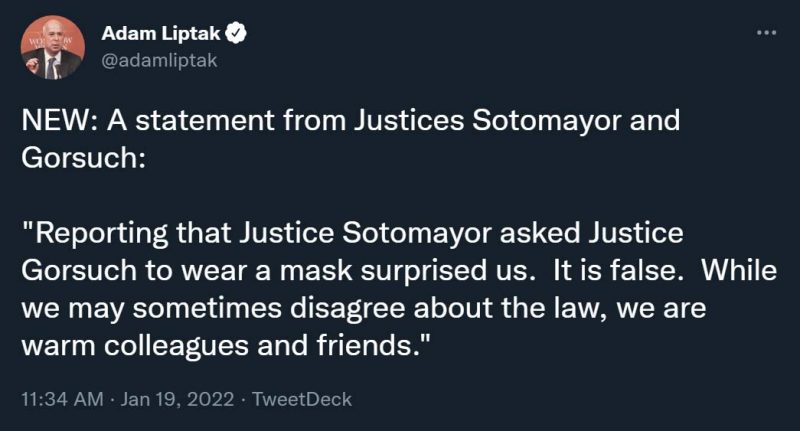 NPR strongly defended Totenberg’s reporting, pointing out that the justices’ statement does not directly contradict their story.

“Totenberg never reported that Justice Sotomayor asked Justice Gorsuch to wear a mask, nor did she report that anyone admonished him,” NPR spokesman Ben Fishel said in a statement.
— Business Insider, 1/18/22

Totenberg’s implications were clear enough as was the response from the justices in question.

The court on Wednesday issued an unusual three-sentence statement from Justices Sonia Sotomayor and Neil Gorsuch. It read: “Reporting that Justice Sotomayor asked Justice Gorsuch to wear a mask surprised us. It is false. While we may sometimes disagree about the law, we are warm colleagues and friends.”
— ABC News, 1/19/22

Nina Totenberg, “legal affairs correspondent for National Public Radio focusing primarily on the activities and politics of the Supreme Court of the United States” cites no one in her piece. No anonymous source or official speaking under condition of anonymity, zip, zero, nada; a clear flunking of Journalism 1.01.

Turns out she was inspired by the opinion of another conservative-hating liberal.

One justice, Sonia Sotomayor, who had previously been the only justice to wear a mask on the bench, participated remotely from her chambers. Sotomayor has diabetes, which is a risk factor for more severe illness with covid. She also is, or would have been, Gorsuch’s seat mate for the nearly four-hour-long argument session.

The court, having resumed in-person arguments, retains strict limits on who can attend and strict rules for those allowed inside the chamber. Reporters and lawyers must wear masks — N95 masks, not the less-effective cloth variety — and test negative for covid. In fact, two of the lawyers who argued against the Biden administration’s vaccine mandates had to do so remotely after testing positive. And instead of being crammed cheek by jowl in the press section, reporters, along with the justices’ law clerks, are spaced throughout the otherwise-empty chamber.

These rules and practices all make sense for the court (where five justices, including Sotomayor, are over 65) and for the public. Indeed, they offer a model for responsible workplace behavior in an age of omicron.

Which brings me to the question: Where was Gorsuch’s mask?
— Ruth Marcus, Washington Post, 1/7/22

Marcus’ “op-ed” got all this rolling, Totenberg lit the fuse given, and it was dutifully rewritten and distributed.

Either Marcus and Totenberg made it all up, the Washington Post and NPR accepted it without asking her to provide the customary attribution, OR Marcus and Totenberg made it up and it was blindly accepted by the Washington Post and NPR because it was what they wanted to believe, their audience would also accept it because they want to be believe it as true and are too lazy to verify it.

It’s not like so-called liberal journalists making shit up never happened before and it would be interesting to see how justices would rule if #DefundNPR ever made it before them?